OUR JEWISH ENEMIES have long recognized that the first step toward obtaining their goals of subjugation and ultimately genocide is destroying the healthy traditions of their host peoples and replacing them with spiritual evil. A debased White, living in a kosher sewer of hedonism, pornography, drug abuse, sports cuckoldry, materialism, Jew feminism and nihilism represents no threat whatsoever to the grand strategy of ruining our nations and turning whatever descendants we still manage to have into brown slaves. Family, tradition, culture and religion are the bulwarks against the traveling merchant and its carpet bag full of vile corruption.

Throughout the disastrous Jewish century the wandering alien has been content to do its evil in the shadows, hiding its role in the decline and fall as best as possible. Now, faced with a reversal, the merchant has become desperate, whipped into a frenzy of lust for gentile blood and not thinking clearly. The mask has slipped off. They thought they had won, they thought we would continue silently marching toward the demographic gallows. They rage, they spit, they curse in Hebrew and now they present their symbols at the spiritual sickness parade. “We are still in charge, you unclean meat! Look at our mighty flags flying over the empty heads of the final victims of the Long March!”

SlutWalk Chicago will allow marchers carrying Jewish or Zionist symbols after saying earlier they would be banned.

This is great news. Now it will be clear to anyone but an idiot who is behind this thoroughly repellent display. What resembles an insane asylum mass escape will slither its way like the envenomed adder it always was through the decaying streets of Chiraq. Look at the proud “sluts!” No children. No future. A damaged mind and a damaged body. Chase hedonism, what could possibly go wrong? The star of David is presented proudly over the depravity. Maybe they’re not our Great Ally after all.

The group, part of an international movement that protests rape culture, in its ban announced this month referred to a decision by the Chicago Dyke March to ask three women carrying rainbow flags featuring white Stars of David to leave.

Dykes go on strike. We’re fighting “rape culture” so of course we’re going to focus on the Middle East and Africa and their horrible treatment of our fellow warm pleasure sacks. Just kidding, this sickness is for Whites and only Whites. It was intended to destroy our families, to prevent the birth of White children, to drive us into extinction. The plan is no longer working. Scream louder, perverts. Maybe Ba’al is sleeping.

The organizer, identified as Red, also said the collective needs to make amends to the Jewish community for past actions.

Good idea, “Red!” Our kollectiv of work units and bar codes will benefit immeasurably from letting the satanic outsider pitch a fit in front of the vomit-inducing spectacle their attacks on the West created.

“Those are welcome, everyone is welcome to express themselves as they see fit at SlutWalk. And we encourage people to bring signs and symbols that represent fighting sexism, patriarchy, rape culture, and that takes a lot of different forms for different people, and we support them in how they decide to show up for SlutWalk.”

All forms of mental illness and reprobation welcome!  Wave your Semitic rag! This will win hearts and minds. I wonder why our numbers keep declining.

SlutWalk has reached out to the Jewish and Muslim communities in Chicago to show that the event is inclusive and offers a safe space to all participants, Red told Haaretz.

Better bring Muslims into your “safe space,” that’s logical. Time to take a ride off the roof of an apartment building, get honor killed for being a whore or have your unnatural and demonic proclivities treated with “corrective rape.” We’re fighting the Patriarchy, fighting the White man. There’s institutionalized violence against women in homogeneous White areas. Welcome, Mohammad! What’s that sword for?

“As a feminist person myself, I feel very strongly about Palestinian liberation and radical Jewish resistance,” Red told Haaretz. “I care very deeply about those concerns, but I do think that at SlutWalk Chicago we have some apologizing to do around the confusion with some of our tweets.”

This is a crazy person. You need help, not a public forum for your pathology.

Jewish groups have denounced the banning of the Jewish Pride flags at the lesbian march and called for an apology.

You can never apologize too many times, that’s for sure. 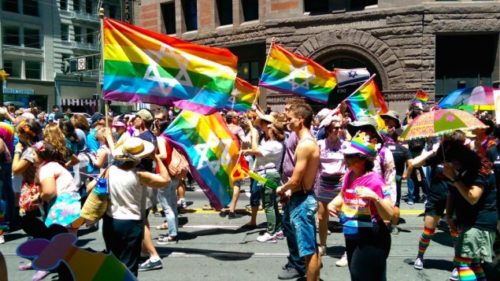 What strikes me in Mr Rossetti’s well-written essay is that he doesn’t seem to be aware of one powerful factor that accounts for the destruction of the European, or White, peoples: their stubborn dividing themselves into (allegedly) “superior” “West Europeans” and (allegedly) “inferior” “East Europeans.” (The division seems largely the result of Jewish propaganda persistently keeping it alive, but also of some other attitude whose origin seems more ancient.)

So I wonder what specifically Mr Rossetti understands by “the West”? Does he include countries such as Poland, Hungary, Slovakia, the Czech Republic, Romania, Bulgaria, Croatia in “the West,” or not?
If not, then WHY not?

Over It
Reply to  Dan M.

When I hear “European”, I don’t assume it excludes those from Poland, Czech Republic, and so on. Likewise, I believe “the West” refers collectively to the descendants of Western civilization, which would include all White people, regardless of the countries in which they live. The tricky issue with Eastern Europe is that those nations have a much older and darker relationship with jews, communism and the infiltration of non-Whites, as in the case of the gypsies in Hungary and Romania, and the massive pre-WW2 jewish population and heritage in Poland and Russia. Case in point: Most people think Viktor Orban of Hungary is White. He is not. I have a close friend from Hungary who has pointed out, among others, that Orban is a Roma, a gypsy and thus in… Read more »

Stefan
Reply to  Over It

Orban is a version of Urban, one of those neutral names Juden adopt.

This is where white nationalism and history collide, based on your biased terminology: The East was genetically “tainted” more by mongols than jews, except perhaps in Russia. The physical effects can be “unfortunate” – e.g. oddly shaped heads having forward-sloping rear, Asiatic eye-fold. East Germany was largely made up of lands that long ago were mainly occupied by Western Slav tribes like the Wends. Was this why it stayed in Stalin’s hands after WWII, like Poland? T’was 1940’s WASP disdain for “tainted” Slavs and nothing less.

Are you serious or joking?

No offense, but I haven’t read such wildly contrary-to-facts baloney for a long, long time.

Are you actually European and of European origin? :)

To NV Editor: as I understand, the late Mr Pierce was never isolationist nor racist toward nations regarded as “Eastern Europeans,” was he?

Dan: Dr. Pierce was married to a woman from that part of the world when I was working with him on The Land. He also made reference, quite a few times, to the greater level of understanding of the Jewish question among Whites from that area, compared with others.

This is the battle line drawn, as has so often been so in the past.

Look at that photo. Are we not men? Or Are We Devo?

We need to deal with this cancerous problem of white devolution once and for all.