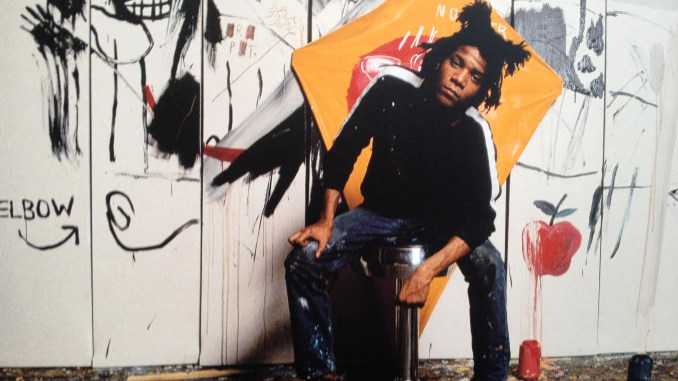 AN ABSTRACT PICTURE of a skull that The New York Times describes as “forged from oil stick and spray paint” has sold for $110 million in an auction making it one of the most expensive paintings on earth. It was produced by Jean-Michel Basquiat, a Haitian immigrant graffiti artist who died of a drug overdose in New York in 1988. The painting was bought by Japanese billionaire Yusaku Maezawa.

While on this subject, check out the story of Alexis Adler, “a Jewish girl from Seattle,” who lived with “the Haitian-American high school dropout.” Apparently, her Black boyfriend and fellow drug addict covered the “walls, furniture and floors of their East Village apartment with his trademark symbols, scribbles and scrawls.” She has been selling these scribblings for a fortune and has lived in the New York media limelight for years due to her attachment to Basquiat.

The entire story is repulsive and off-putting. The media has built up a Black drop-out and heroin addict who scribbled nonsense on walls, clothing and canvas into a great “artist” who is now considered among the greatest of all time. And strangely enough, some Japanese billionaire has bought into the hype and shelled out huge bucks for a truly awful painting.

I don’t really know what else to say about it except that everything about this is what we want to avoid. It is emblamatic of the post-Modern world we want to replace. We would like to see uplifting, idealistic art that reflects our European character. And I will add that maybe putting junk like this skull scribbling in a museum of degenerate art is not such a bad idea. The liberals are always calling for our flags and monuments to be put in museums where they can be given “context.” Perhaps we should do the same with degenerate art and explain how the high art of Europe and the New World came to be subverted and how the alien media eagerly helped promote degeneracy to the point where good art began to take a back seat to the ridiculous, childish drawings of a Haitian heroin addict.

Trump's Total Ignorance of Freedom of Speech: "Close Up That Internet"

Does any sane person really see artistic value in this cesspool? I am utterly repulsed by most of what passes for modern art. Adding insult to injury, I have always had a certain respect for the Japanese and am dismayed that the buyer was one.

Question: How do we know whether art is degenerate? Answer: We look at it.

Like anything else, beauty is in the eye
of the beholder.

Sorry, but I am unable to read foreign languages.

Modernism and its twin brother, cultural Marxism, are devices developed by leftism which, in its inability and ineptitude to imitate beauty or to express an edifying and lovely worldview, canonized the execrable as if art were, with no other end than the destruction of the pillars of civilization; – God, Family, Country, Beauty, History, Truth also expressed in the 45 goals of the COMMUNIST MANIFEST (http://www.rense.com/general32/americ.htm)  If you don’t have arguments but you have some inferiority complex come to antifa “Our civilization has failed in many crucial areas. These failures have been aggravated by the fact that those who have understood the reason for our troubles refuse to speak out. Others have failed to realize the obvious – that hidden economic forces have acted behind the carefully painted scenes and, virtually… Read more »