REGARDLESS of political persuasion, logic suggests all should be familiar with the most important speech of the 2oth century. Yet, it is unlikely that one in 10,000 people have heard of it, let alone read it. This suggests there are good reasons for these several additional blank pages in the victors’ “history” books.

It is a gross understatement to say that Adolf Hitler was the most influential man of the last century. Like the greatness of the Greeks, the Romans, and the European Renaissance, Hitler’s presence on Earth will continue to have an impact throughout the ages. As the Roman tribune Rienzi was in Rome, Adolf Hitler was consumed by the inferno in Berlin.

However, much to the dismay of his critics, phoenix-like, the former revolutionary — more radiant than ever before — inexorably rises from the ashes. A million tomes of acidic “water” poured on the Hitler legend fail to douse the embers.

It is interesting to note that Hitler firmly believed in the resurrection of his spirit. In his final address he refers to his ‘spirit living on and his companions remaining as close to him after his mortal death.’

Dawn was yet to break over the smoke-filled capital when Germany’s elected Chancellor and President, the Leader, made his address:

Since 1914, when as a volunteer, I made my modest contribution in the World War which was forced upon the Reich, over thirty years have passed.

In these three decades, only love for my people and loyalty to my people has guided me in all my thoughts, actions, and life. They gave me the strength to make the most difficult decisions, such as no mortal has yet had to face. I have exhausted my time, my working energy, and my health in these three decades.

It is untrue that I or anybody else in Germany wanted war in 1939. It was desired and instigated exclusively by those international statesmen who were either of Jewish origin or working for Jewish interests.

I have made so many offers for the reduction and elimination of armaments, which posterity cannot explain away for all eternity, that the responsibility for the outbreak of this war cannot rest on me.

Furthermore, I never desired that after the first terrible World War a second war should arise against England or even against America. Centuries may pass, but out of the ruins of our cities and monuments of art there will arise anew the hatred for the people who alone are ultimately responsible: International Jewry and its helpers!

As late as three days before the outbreak of the German-Polish War, I proposed to the British Ambassador in Berlin a solution for the German-Polish problem, similar to the problem of the Saar area, under international control.

This offer cannot be explained away, either. It was only rejected because the responsible circles in English politics wanted the war, partly in the expectation of business advantages, partly driven by propaganda promoted by international Jewry.

But I left no doubt about the fact that if the peoples of Europe were again only regarded as so many packages of stock shares by these international money and finance conspirators, then that race, too, which is the truly guilty party in this murderous struggle would also have to be held to account: the Jews!

I further left no doubt that this time we would not permit millions of European children of Aryan descent to die of hunger, nor millions of grown-up men to suffer death, nor hundreds of thousands of women and children to be burned and bombed to death in their cities, without the truly guilty party having to atone for its guilt, even if through more humane means.

After six years of struggle, which in spite of all reverses will go down in history as the most glorious and most courageous manifestation of a people’s will to live, I cannot separate myself from the city which is the capital of this Reich.

Because our forces are too few to permit any further resistance against the enemy’s assaults, and because individual resistance is rendered valueless by blinded and characterless scoundrels, I desire to share the fate that millions of others have taken upon themselves, in that I shall remain in this city. Furthermore, I do not want to fall into the hands of enemies who for the delectation of the hate-riddled masses require a new spectacle promoted by the Jews.

I have therefore resolved to remain in Berlin and there to choose death of my own will at the very moment when, as I believe, the seat of the Führer and Chancellor can no longer be defended.

I die with a joyful heart in the awareness of the immeasurable deeds and achievements of our soldiers at the front, of our women at home, the achievements of our peasants and workers, and the contribution, unique in history, of our youth, which bears my name.

It goes without saying that I thank them all from the bottom of my heart and that it is also my desire that in spite of everything they should not give up the struggle, but continue fighting wherever they may be, faithful to the great Clausewitz, against the enemies of the Fatherland.

From the sacrifices of our soldiers and from my own comradeship with them, there will come in one way or another into German history the seed of a brilliant renaissance of the National Socialist movement and thus the realization of a true national community.

Many very brave men and women have resolved to link their lives to mine to the very end. I have requested them, and finally ordered them, not to do so, but instead to take part in the continuing struggle of the nation.

I ask the commanders of the army, navy, and air force to strengthen by all possible means the spirit of resistance of our soldiers in the spirit of National Socialism, emphasizing especially that I too, as founder and creator of this movement, have preferred death to cowardly flight or even capitulation.

May it be one day a part of the code of honour; as it is already in the navy, that the surrender of an area or of a town is impossible, and above all in this respect the leaders should give a shining example of faithful devotion to duty unto death.

Several brave men have joined me by their own free will and do not wish to leave the capital of the Reich under any circumstances, but on the contrary are willing to perish with me here. Yet I must ask them to obey my request, and in this instance place the interests of the nation above their own feelings.

Through their work and loyalty they will remain just as close to me as companions after my death, just as I hope that my spirit will remain amongst them and will always accompany them. Let them be hard, but never unjust; above all, let them never allow fear to counsel their actions, but may they place the honour of the nation above everything on this earth.

Finally, may they be conscious of the fact that our task of building a National Socialist state represents the labour of the coming centuries, and this places every single person under an obligation always to serve the common interest and to subordinate his own interests. I demand of all Germans, all National Socialists, men and women and all soldiers of the Armed Forces, that they remain faithful and obedient to the new government and to their President unto death.

Above all, I charge the leadership of the nation and their followers with the strict observance of the racial laws and with merciless resistance against the universal poisoners of all peoples, international Jewry. (Reich President and Chancellor Adolf Hitler, Berlin, 29 April 1945, 4 AM)

There are scores of similar revelations, plus illustrations, in my book Odyssey Adolf Hitler.

“Finally, may they be conscious of the fact that our task of building a National Socialist state represents the labour of the coming centuries, and this places every single person under an obligation always to serve the common interest and to subordinate his own interests.” Yes, indeed… that “common interest” must be understood as an obligation to our descendants and every branch that extends from them. We must shake free from the selfish desire to pleasure ourselves at the expense of our progeny. Even at the bitter end… Adolf Hitler recognized the plight of those who had supported him throughout his epic quest. Of course, this heroism is not only ignored by historians, but subtly presented as “proof” of his undying hatred of “der juden”. Thinking people of this and… Read more » 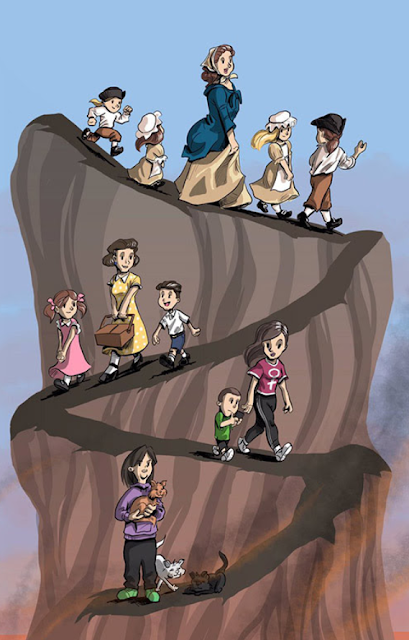 Will Nature’s Laws really win in the end?

I further left no doubt that this time we would not permit millions of European children of Aryan descent to die of hunger, nor millions of grown-up men to suffer death, nor hundreds of thousands of women and children to be burned and bombed to death in their cities, without the truly guilty party having to atone for its guilt, even if through more humane means.

I have always wondered what the Fuhrer meant by this paragraph. I am 100% convinced that the mainstream ‘Holocaust’ narrative is nonsense, but am puzzled what he meant by ‘more humane means.’

I think the time is rapidly approaching, when the jewish led regime in the USA will self destruct, taking the bolshevik jews with them. Generally, Americans are too ignorant to see what zionism/boshevism is doing to their country. But, jews being jews, their arrogance will eventually open peoples eyes to reality. I hope I live long enough to see the rise of National Socialism from the ashes.

Forward racial brothers. Never tire of fighting the Jew. They have screwed us big this time but it will be avenged.

Arguably, Hitler’s most moving speech of the war. He demonstrated courage and confidence in the future on an epic scale while clearly identifying the real culprits behind the outbreak of the war.