IS THE New Order’s vision of a White, National Socialist America a realistic possibility, or is it just a hopeless daydream?

Speak with any National Socialist who has experience in organizing and recruiting and he or she will give you the same report: It is common to hear racially-aware Whites opine that a National Socialist America sounds great in theory, but that in practice it is an impossibility, because “White Americans just won’t go for it.”

Say these defeatists: Our racial brothers and sisters have been too brainwashed by the schools and the media against National Socialism, and they have been made too soft and too degenerate from decades of easy living. Furthermore, today’s Whites are hypnotized by materialism and in general are too apathetic to their racial future to embrace the hard, radical solutions the New Order offers.

Additionally, the defeatists correctly note that White numbers are shrinking: In 1960 the US was about 90 percent White, whereas now it is only 60 percent — and dropping every day. There is, they glumly tell us, no way that we can win a majority of the vote with these numbers.

But is the situation really as hopeless as the defeatists maintain? Is our only realistic option to throw up our hands in despair? Is supporting a slow death of our race, as opposed to a quick death, the best we can hope for?

No, the defeatists are wrong — dead wrong. There is still hope for the White people of America, provided a determined minority of racially conscious Whites come together under the banner of National Socialism and act in a swift and concerted manner.

It may, in fact, be impossible for us to vote our way out of the mess we are in. But our survival need not be determined by whether or not we can achieve a majority of votes in some election. And in any event, numbers aside, the electoral system itself is always rigged so that White people lose no matter which candidate wins.

But the electoral path is not the only option open to us. There is another way forward for us as a people, that of White revolution.

Indeed, our own American history provides us with an inspiring example of how the revolutionary heroism of a tiny minority can overcome the dead weight of a sluggish and apathetic majority.

The numbers are only approximate, but the tale they tell is true: At the time of the American Revolution there were 2.5 million Whites living in the 13 colonies. About one-third of these favored independence, a second third were opposed to it, and the last third did not care about it one way or the other.

And even among the one-third who supported independence, only about 10 percent stepped forward to actively participate in the revolutionary struggle. A mere 75,000 men and women were willing to physically defy the British Crown, which was then the number one super-power in the world. That number was only a tiny three percent of the total population of the colonies. Three percent!

No, the revolutionaries did not have the majority of the country behind them, and among those who did support their struggle, only one in ten were willing to risk their lives, their fortunes, and their sacred honor. And yet, with much sacrifice and against all odds, this three percent prevailed.

The reality is that a revolution is not an election, and you do not need a majority vote to win it.

Many years later, and a continent away, Adolf Hitler noted in Mein Kampf that,

World history is made by minorities, when this numerical minority embodies a majority of will and determination. (Volume II, Chapter 2, page 399 in the Manheim translation)

No, our struggle is not hopeless, despite the daunting odds that we face. A White, National Socialist America is a real possibility — but only if those men and women who believe in the future of the race are willing to step forward and act in an organized and disciplined manner. It may be that we will never get 51 percent of the vote in a national election; that may be beyond us. But it is certainly within the realm of possibility for us to rally a heroic three percent of the population around the Swastika banner of our race.

Think it over, racial brothers and sisters: are you ready to commit yourself to such a struggle? Think it over — but do not take too long, because every day that you delay lengthens the odds against us.

The Holocaust Problem
Barbarians, Savages, and the Perils of Civilization
Contra Wikipedia: Setting the Record Straight On the Murder of Andrej Lisanik and the End of the Nat...
Universal Democracy
Virginia Governor-Elect Vows "Open Door" to Non-White Invaders
Democracy is a Kind of Death, part 1
Who is Hitler?
Toward a Healthy Society
Tags:DemocracyJames HartingNew OrderRevolutionStrategy 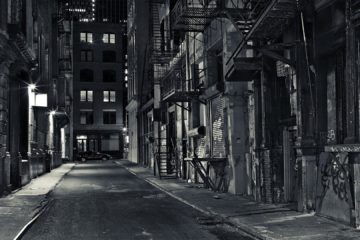 The Revenge of Johann Sebastian Bach

I like the Rockwellian illustration at the top — Rockwellian, that is, in the style of George Lincoln Rockwell, as distinct from Norman Rockwell.

So why did the so-called leading fathers replace monarchial tyranny with federal tyranny. From 1865 forward the states have been emasculated. The South did rise up again 100 years later in the 1960s. We had a chance to turn things around, but we had no help from the North. It was so interesting watching us on television, nobody was motivated to come on down.

They didn’t voluntarily replace monarchy with federal tyranny. The War Between the States was intentionally instigated, through rising tariffs, with the ultimate goal of destroying state sovereignty and instituting a monolithic, all-powerful federal government. This is what Lincoln meant when he said his sole purpose wasn’t to free a single slave but to “preserve the union”. In fact, the Marxists that led the largely failed revolutions in Europe in 1848, called 48’ers, fled to the U.S. Lincoln’s administration was filled with them. The War Between the States was an American coup in much the same way we spread “democracy” to other countries and install the same kind of government there. There is no way the Zionists could have used the U.S. as their worldwide military enforcer if the south had… Read more »

While the article was rather vague about what exactly “men and women who believe in the future of the race are willing to step forward and act in an organized and disciplined manner” means, may I make a suggestion? Yes? Good.

Start by having a family, and by that one where one White man and one White woman of child bearing age come together and produce children. Teach yourselves and teach your children our Cosmotheist values using the resources that are available. Network with others who are also forming families with our ethos, and seek to form physical communities so we can help each other build our strength.

This is a minimum, I believe.

USA will never have another revolution, especially if it is National Socialist inspired. First, there is no one with the genius, and carismatic drawing power of Herr Hitler. Second, Americans are too lazy. Third, the groups in USA claiming to be National Socialist, have no idea what it means to be a “true” National Socialist. Like it, or not, the jews are better organized, and have the wealth.

So you are clearly in the 97 percent.

My only request is that you stand out of the way of those of us who are of a more activist frame of mind.

This is true, SOMA. But the federals used the Constitution as a weapon to destroy statehood in the 1860s — to strike down the interest of the people on the local level. The federal principle was a failure. A mixed government is vertigo. Anyway, we fought on the local in the 1960s to repulse the federals because we believe that statehood comes first. That outfit on the Potomac is not our cup of tea. The folk come first.