Jews Establish Blacklist of Colleges and Academics Critical of Israel 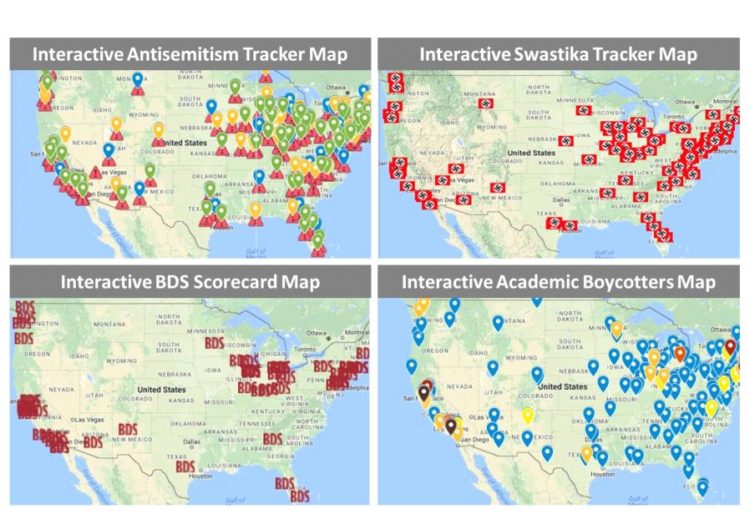 They sure hated Joe McCarthy’s blacklist of Communists, though.

BARELY THREE WEEKS after the Knesset passed controversial legislation that would deny entry into Israel to any foreigners who publicly support a boycott of the country, a small but vocal Jewish organization that fights anti-Israel activism on American college campuses published a list Wednesday of all the professors in the United States who have ever called for an academic boycott of Israel.

The AMCHA Initiative, which operates out of the University of California Santa Cruz, unveiled several interactive maps designed to give viewers what it said was “the ability to visually understand the distribution and geographical patterns of anti-Semitic activity on U.S. college and university campuses.”

One of these maps, the “Interactive Academic Boycotters Map,” identifies with different colored markers the institutions of higher education in the United States with faculty who support an academic boycott of Israel. The universities are divided into categories according to the number of boycott supporters they employ. Each category is assigned a different colored marker.

By clicking on any marker on the map, a viewer can obtain a list of all the names of faculty members who have signed a public document endorsing the academic boycott of Israel. The list only provides names and not department affiliations. It does not specify what documents the faculty members signed.

The universities with the largest number of boycott supporters, according to the interactive map, are both in the California state system: UC Berkeley with 47 names on its list and UC Davis with 46. Altogether, the lists contain hundreds of names.

Among the other interactive maps published by the AMCHA Initiative today is one called “The BDS Scorecard Map,” which documents the voting results of campus BDS resolutions dating back to 2012.

The AMCHA Initiative, founded in 2011, is a non-profit that monitors “anti-Semitic” and anti-Israel activities on U.S. university and college classes. A year ago, the University of California became the first public university in the United States to issue a statement condemning “anti-Semitism” on its campuses, though it stopped short of a blanket denunciation of anti-Zionism. The AMCHA Initiative was the driving force behind this landmark declaration. The group has frequently come under attack, however, for conflating “anti-Semitism” with condemnation of Israel.

“The anti-Semitism plaguing our nation’s colleges and universities continues to grow,” said Tammi Rossman-Benjamin, AMCHA Initiative founder and director, in a statement. “One of AMCHA’s main goals, one we take very seriously, is documenting and exposing the threat. We hope these new education and research tools will prove helpful to advocacy organizations, government officials, university administrators, researchers and concerned parents, students and university stakeholders.” …

Assad, Syria, and Jewish Deception in a Nutshell
What is Moral?
Palestine Joins ICC
The Decline and Rise of Whites
In Defense of Saddam Hussein and His Regime
U.S. Jews Demand Refugees — But Not in Israel
Edwin Wright: Zionist Jews Worked to Capture US Government
Fake News and Fake Intelligence Are the Neocon Stock-in-Trade
Tags:anti-IsraelBlacklistBoycottIsraelUnited StatesUniversities

On the Subject of Adolf Hitler

Not sure how this fits into the framework of the jews being able to dump the careers of anyone they accuse of anti-semitism or anti-zionism, tenured or not. An internet dot-map is a poor substitute.

These are very useful maps!

Regarding Joe McCarthy, the New York Constitutional Education Society (see Epperson’s ‘The Unseen Hand’) offered a very large sum of money to anyone who was named as a communist by McCarthy but who was not actually a communist. Nobody claimed this money. In fact many more communists were found within the US Government than recognized by him.

Jews Establish Blacklist of Colleges and Academics Critical of Israel