ESTABLISHMENT MEDIA commentators are increasingly panicked by the prospect of Marine Le Pen being elected President of France on May 7th. The Financial Times today reports: “Marine Le Pen has a better chance in France than you think”. The venerable Andreas Whittam Smith in The Independent speculates: “This is what would have to go wrong for Marine Le Pen to win the presidential election”. New Statesman correspondent Stephen Bush suggests that Marine Le Pen can still win the presidency. While Sky News Europe correspondent Mark Stone has just posted a report on “Why Marine Le Pen’s message resonates across France”.

Let’s be clear — the odds remain heavily against Marine Le Pen winning (this time) because of the French electoral system. Probably around ten candidates will qualify for the first round of the presidential election on April 23rd, and opinion polls have for some time been almost unanimous in showing that Marine Le Pen will be ahead in this first round, with something like 27% of the nationwide vote.

But she would then have to win a second round against the runner-up.

For some time this looked likely to be a Thatcher-style conservative — François Fillon of the Republicans, who under the former name UMP were led by former Presidents Jacques Chirac and Nicolas Sarkozy.

But following financial scandals it looks likely that Fillon might be overtaken by the ex-socialist Emmanuel Macron, who created his own centrist party last year and has enjoyed a surge of media-fuelled support (similar to the SDP over here in the early 1980s).

Macron’s chances have been boosted by today’s endorsement from François Bayrou, a relic of the more “moderate” conservatism which ruled France in the 1970s under President Giscard — the type of politics which founded and still dominates European Union bureaucracies. Bayrou split his own party in 2007 to form the “Democracy Movement”: by supporting Macron this year he has effectively declared the death of “moderate” French conservatism. German Chancellor Angela Merkel, whose politics are similar to Bayrou, must be looking on nervously as she faces her own struggle for re-election on September 24th this year.

Meanwhile in fourth place are the ruling Socialists. Though incumbent President François Hollande decided not to stand for re-election, and his party opted for the most far-left alternative candidate Benoît Hamon, polls suggest that Hamon has in a matter of weeks doubled the pathetic vote that Hollande would have polled. Hamon (15%) seems to be no longer too far behind Fillon and Macron (each on around 20%).

However there are candidates even further to the left than Hamon, such as former minister Jean-Luc Mélenchon (12%) and an assortment of Trotskyists and Greens (about 3% combined). Only if Mélenchon quits the race does it seem possible for Hamon to qualify for the second round.

And — realistically — this would be the most obvious chance for Marine Le Pen. Regardless of “anti-fascist” demonisation, would French conservatives really elect a President from the far left to defeat her? (The only presidential challenger to her hegemony over the non-conservative right is perennial traditionalist candidate Nicolas Dupont-Aignan, who though a long-term ally of Nigel Farage and UKIP only polls around 3%.)

More interesting (especially in the longer term) is the alternative scenario. Increasing numbers of working-class French voters (including former socialists/communists) see Marine Le Pen and her party as champions of the worker against the pitiless, international and cosmopolitan values of the “free” market. She has achieved this — remarkably — without suffering too many damaging splits within her own movement.

Marine Le Pen has long recognised this trend. While trying to “de-demonise” the party in some areas, such as her (so-far fruitless) attempts to appeal to Zionist/Jewish opinion by stressing a common front against radical Islam, she has in terms of economic/financial policy been far more radical than her father, who at one time was aligned with Reaganites and Thatcherites in an anti-communist, pro-capitalist stance.

Even if Hamon makes it into the second round, the French left is surely bankrupt. Marine Le Pen and the FN have a great chance of reaching the Elysée Palace — if not this year then in 2022. 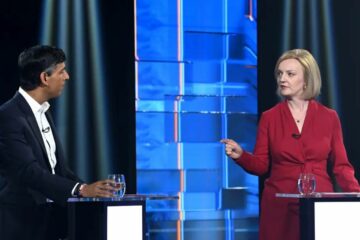 IMHO, Le Pen has not got a chance. Support to her is about that 27% which is really good, but it means too that 73% are against her. These people against her, will vote anything as long as “fascism” (Le Pen) does not get to power. It already happened in regional elections, FN won a lot of regions and their opponents, left or right teamed up against her party so they could not got hold of any regional parliament seat.

She’s no fan of whites, she’s shacked up with an obnoxious jew, thus a race traitor. Also a traitor to her own father.