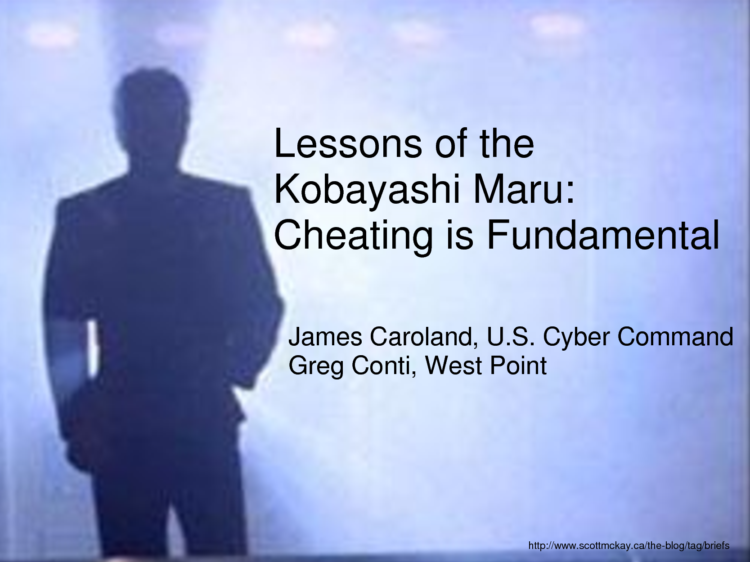 IN TERMS OF collective survival, Whites are in a no-win situation where no favorable outcome is possible, laws and mores against genocide, racism, and discrimination notwithstanding. We are bound to lose no matter what we do as long as we continue to adhere to the enemy’s rules. The longer we wait, the worse things get. As in certain movies and suspense novels, there is a ticking clock. The fact that Jews, other elites, and government hysterically scream “White racism” and “anti-Semitism” 24 hours a day is irrelevant. “White racism” is as big a falsehood as their own much-trumpeted “anti-racism.” Both are instances of the Big Lie.

How can one deal with such a no-win situation? An option suggested by contemporary fiction is the Kobayashi Maru solution.

The Kobayashi Maru Scenario was a plot element in the film Star Trek II: The Wrath of Khan (Paramount Pictures, 1982), a training exercise in the fictional Star Trek universe designed to test the character of command-track cadets at Starfleet Academy in the 23rd century.

In the 1960s Roddenberry had an affair with Negro actress Nichelle Nichols while still married to his first wife. In a casting couch decision, Roddenberry cast Nichols as a guest star on his first TV series, The Lieutenant (1964), in an anti-White episode that NBC reportedly refused to air or even pay for. (Different era!) Nichols’ role as Lieutenant Uhura aboard the USS Enterprise was also the result of this prior sexual relationship. Establishment commentators hail her casting as a cultural milestone in the race war against White America.

In the Kobayashi Maru simulation from The Wrath of Khan, the cadet being tested commands a Federation (good-guy) spaceship sent to the aid of another Federation vessel, the Kobayashi Maru. The disabled ship is adrift in the Klingon (bad-guy) Neutral Zone, and any Starfleet ship entering the zone will be in violation of treaty and liable to attack.

The cadet commander must decide whether to attempt to rescue the stranded ship, precipitating an all-out war with the Klingons and jeopardizing his own vessel and crewmates’ lives in the process, or leave the Kobayashi Maru to certain destruction. If the cadet attempts to save the crippled vessel, the simulation, unbeknownst to him, is programmed to guarantee that his own ship will be destroyed with all hands on board. Not only will he be unsuccessful in saving the Kobayashi Maru, but everyone else will die as well. The object is to test the cadet’s character and presence of mind in the face of large-scale disaster and certain death.

In the entire history of Starfleet Academy, only one cadet, James T. Kirk (the central character in the Star Trek series) ever beat the no-win scenario. After taking the test and failing it twice, Kirk surreptitiously reprogrammed the computer to make victory certain before taking it a third time and passing. He was awarded a commendation for “original thinking.”

Two real-life military instructors, James Caroland, a Navy Information Warfare Officer, member of the US Cyber Command, and adjunct Associate Professor in the University of Maryland’s Cybersecurity Program, and Greg Conti (note the Trojan horse symbolic of covert infiltration in the photo on his personal web page), an associate professor at West Point’s Department of Electrical Engineering and Computer Science and director of its Cyber Security Research Center, developed an exercise inspired by the Kobayashi Maru Scenario intended to teach their students in the Joint Advanced Cyber Warfare Course to cheat.

Their “American” military students, of course, were a motley crew — male and female, homosexual and lesbian, belonging to every race under the sun. At least one was Chinese.

The instructors described their exercise in a 4-page article published in an issue of the Institute of Electrical and Electronics Engineers IEEE Security and Privacy (“Embracing the Kobayashi Maru: Why You Should Teach Your Students to Cheat,” July/August 2011), and a 20-minute joint lecture, “Lessons of the Kobayashi Maru: Cheating is Fundamental” delivered to an audience of 1,800 attendees at the ShmooCon 2012 hackers convention in Washington, DC.

The fixation on cheating should not come as a surprise. Government and the Left routinely display contempt for law in matters pertaining to genocide, “hate speech,” civil liberties, anti-White racism and discrimination, replacement migration, or the framing, railroading, and even murder (the Weavers) of Holocaust revisionists and White nationalists. Not to mention what goes on overseas. Laws and administrative rules are arbitrary and capricious, to be used or trampled upon as needed.

What the authors write about their own team (the government) is actually more pertinent to us:

Adversaries cheat. The good guys don’t. . . . But the dissonance between how our adversaries operate and how we teach our students puts our students at a distinct disadvantage when faced with real-world opponents who inevitably don’t play by the rules. Breaking through the paradigm where students self-censor their ways of thinking to a new archetype that cultivates an effective adversarial mindset is both necessary and possible. . . . [A] devious mind is equally as important as a beautiful one.

Their test involved a deliberately unfair examination. On short notice students were required to write down the first 100 digits of the mathematical constant pi (3.14159 . . .), the ratio of a circle’s circumference to its diameter, from “memory.” In actuality, the students were informed ahead of time that they were not expected to memorize the impossibly long string of random digits, but rather to cheat. How students cheated was entirely up to them. Collaborative cheating was encouraged. But anyone caught cheating would fail the test. A prize was offered to whoever exhibited the most creative and effective technique. To increase the stress level, instructors strolled about the classroom during the examination.

You can read their article or listen to their lecture to learn the various stratagems people devised. Evidently students are permitted to have a surprisingly large number of objects on their desks during exams. When I was a student you had the test, your pen or pencil, and nothing else.

My personal favorite: someone memorized and wrote down the first ten digits of pi followed by a string of 90 completely random numbers, relying (correctly, it turned out) on the carelessness of the teachers, who did not actually check the answers. Simple and elegant. The other methods were all more complicated and time-consuming. Indeed, many students not only wrote out all 100 digits on “cheat sheets” of one sort or another, but encoded them as well.

The authors make a point highly relevant to Whites under the gun from Jews, government, the media, academia, and the Left: “It’s because of our inherent and unconscious trust that we leave ourselves open to exploitation.” Using this behavioral trait, the FBI’s COINTELPRO program in the 1960s wreaked havoc among Whites opposed to integration, thereby radically altering the course of history and contributing to the biological destruction of our race.

Of course, a balance must be struck to foster the trust needed for genuine camaraderie and effective cooperation, and to create the basis for a healthy new order in the future. We do not want to reproduce anything like the present criminal system or its fraternal twin, Communism.

Exploiting “predictability and patterns” is also relevant, because anyone who studies Jews — in order to do so properly you must have an open mind with no psychological, emotional, or devotional hang-ups or mental blocks preventing you from seeing them objectively — cannot fail to notice that they use the same methods of aggression over and over again. They are successful, apparently, because their victims, who are invariably less dominant than themselves, have their own patterns and predictableness that Jews effortlessly exploit.

In addition, before Jews act, they usually have overwhelming, indeed staggering, force and the backing of authority on their side, as was the case with their secret assassination of Palestinian Mahmoud Al-Mabhouh in Dubai in 2010, executed to look like a natural death, but which was exposed, publicly, after an impressive in-depth investigation by the emirate’s Arab police chief. Yet Jewish media control and influence over the world’s governments insured that the killing quickly disappeared down the memory hole — forever.

So many, many forgotten victims.

Wrath of Khan’s director and uncredited script doctor Nicholas Meyer, the son of a Manhattan psychoanalyst and a concert pianist, is yet another of the millions of poor, persecuted Jews who overcrowd the top ranks of the West’s governments, media, academia, think tanks, and multibillion dollar hedge funds.

Meyer had not seen a single episode of Star Trek, or the first film, Star Trek: The Motion Picture (Paramount Pictures, 1979), when he was brought on board. He said, “The chief contribution I brought to Star Trek II was a healthy disrespect, irreverence. I didn’t insist that Captain Kirk go to the bathroom, but did Star Trek have to be so sanctified?”

In response to fans’ complaints that Captain Kirk “cheated” in order to pass the Kobayashi Maru test, Meyer responded that cheating revealed an aspect of Kirk’s character, and that the film, or Kirk, shouldn’t be restricted by “television mentality.” One is reminded of the Israeli Mossad’s governing motto: “By way of deception, thou shalt do war.”

The dilemma that Whites who care about the plight of their people, and who can think independently — precious few! — must resolve soon is what to do about the rules of the present no-win situation their murderous foes have shackled them with. Accept them meekly and die, or fight back in ways that make sense?

As military instructors Conti and Caroland noted approvingly: “Famously, Captain Kirk beat the scenario, and this is important, by stepping outside the game and altering its rules to his benefit. By deciding to cheat and alter the program driving the exercise, he won the contest.”

Or, as Captain Kirk himself put it: “I don’t like to lose. I don’t believe in no-win scenarios.”

Marriage and Survival
The Open Sewer of Network Talmudvision
Milwaukee: Racial Reality "Surprises" White Victim
Toward the Stars
Haymarket Square
Aesop's Fables and the Rules of Engagement
The Ethnostate: Some Problems Nobody Thinks About
Preparing for Race War: The South African Bootcamps Which are Training Thousands of White Youths
Tags:Race WarStar TrekTelevisionWhite AmericaWhite Survival

Tech Industry Trying to Censor Gab.ai to Shut Down Free Speech and Control the Narrative