“Several wartime personalities would end up agreeing on the value of the 2.5-ton US Studebaker-manufactured truck as the one important logistical innovation that really won World War 2 for the Allies and more than any other single weapon of the conflict.”

AN IRONY of history is that the vehicles credited with saving the “Bolshevik anti-Christ” were made by a manufacturing company founded by a family of German Baptists, a religion that views war as the epitome of evil.

The family had first settled in the United States in September 1736. Peter Studebaker and his son, also named Peter, founded the wagon-making company in the late 18th century. The company got a head start by being in the right place at the right time to provide wagons for the California Gold Rush of 1849.

Whatever the business touched turned to gold, too. Soon the main supplier of vehicles to the White House, Studebaker was said to be ‘the largest vehicle house in the world.’ This is where the plot thickens, for in 1911 the Studebaker marque effectively fell into the hands of Jewish bankers. 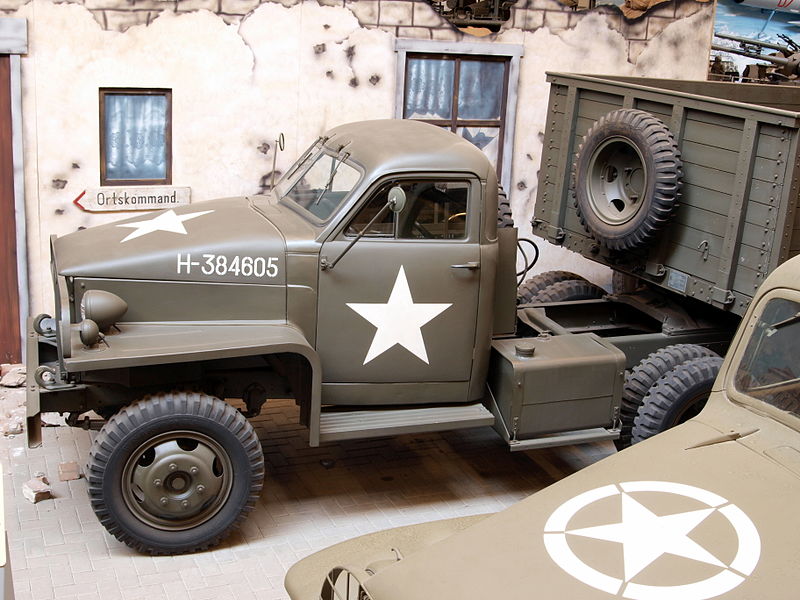 “He who holds the purse strings…” as the saying goes; the company’s finances were from then on provided by the Lehman Brothers and managed by Goldman Sachs.

Three years later and it was time to make a killing. Studebaker, during the Great War, was to supply the British, French, Russian, and later the US armed forces with the bulk of their vehicles. The company’s petrol-powered vehicle audit was 100,000 vehicles each year. Old scores and wars all come to an end, and the Great Depression of 1933 was eventually to bring about the Studebaker Company’s bankruptcy. The company’s president took his own life in 1933.

It was time to vigorously rub hands: America’s sought-after war with Germany was ignited by a back-door US conspiracy, exploiting the weaknesses in the Berlin-Rome-Tokyo Axis Tripartite Agreement. This door had been conveniently kicked open in December 1941 by America setting up Pearl Harbor for a ‘surprise’ attack. It was a happy Christmas for Wall Street. 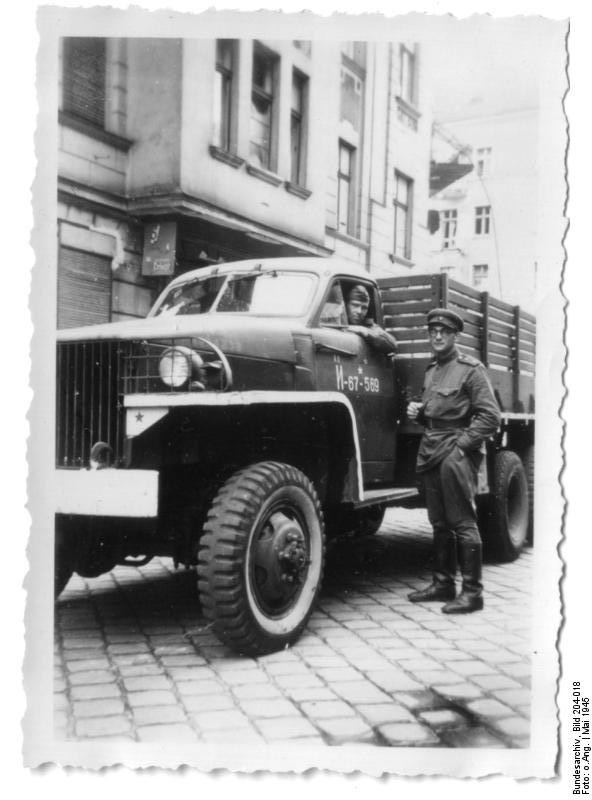 In April 1941 the US government entered into a contract with the Studebaker automobile company to begin producing 2.5-ton-class military trucks out of its factory in South Bend, Indiana. Studebaker was tasked with manufacturing 197,678 trucks, virtually all of which were destined for the Bolshevik Red Army. The Studebaker model US6 saw manufacture from 1941 to 1945. All 2.5-ton trucks produced in America had interchangeable parts which eased overall production and helped with repairs abroad.

As far as the eye could see were hundreds of thousands of Studebaker vehicles destined for American ports. From these ports the vehicles would be shipped to Murmansk, via Britain, and to the warm-weather ports of Persia, now Iran.

The scale of the operation was such that 2,803 freighters were required to transport these Iran-bound trucks. Upon arrival in US-backed Persia, the trucks then travelled hundreds of miles over mountain passes and into valleys, even crossing deserts before reaching the beleaguered Soviet Union.

The US6 line eventually numbered some thirteen types and arrived in 6×4/6×6-wheeled forms, with short or long wheelbases and with or without a winch system. Most Studebaker trucks were built with a closed cab as the harsh weather in Stalin’s blood-soaked empire required such protection. The Red Army liked the Studebaker stocks as the Hercules engine could run on just about any type of gasoline. It would have been impossible for the Red Army to move the masses of troops and supplies on the primitive roads to the front lines without American Studebaker trucks.

The flatbed trucks were ideal for use as launching pads for the dreaded Soviet rocket artillery. Studebaker trucks were also used for many more sinister activities including the deportation of the North Caucasus Muslims and other ethnic expendables. The Studebaker sales slogan could easily have been ‘No. 1 Choice for Ethnic Cleansing’.

Anyone who has seen war footage will have been awed by the firepower of vehicle-mounted Katyusha multiple rocket launchers.

Various improvised configurations were implemented. Welded on top of this folding frame were 15-foot steel rails to hold fourteen or more M-13 Katyusha high-explosive battlefield rockets. The M-13 rocket was 5 feet, 11 inches long and 5.2 inches in diameter weighing some 93 lbs each. This variant of the Studebaker US6 was the first mobile rocket projector used by the Soviet Army. The Germans, falling under the lethal reach of such a weapon, dubbed the rocket launchers “Stalin’s Organs” for their distinctive howling sound when firing. Battlefield rockets proved a tremendous area-saturation weapon and psychological tool for the Soviets during World War 2. The US6 was used in many roles from troop and munitions carriers to artillery mover and battlefield support weapon.

In July 1943, the Red Army planned a major offensive against the Germans at Kursk. The major problem for Soviet General Zhukov in the upcoming operation would be supply lines. Additionally, there would be difficulty in quickly moving infantry and field guns to advantageous positions along a changing front. 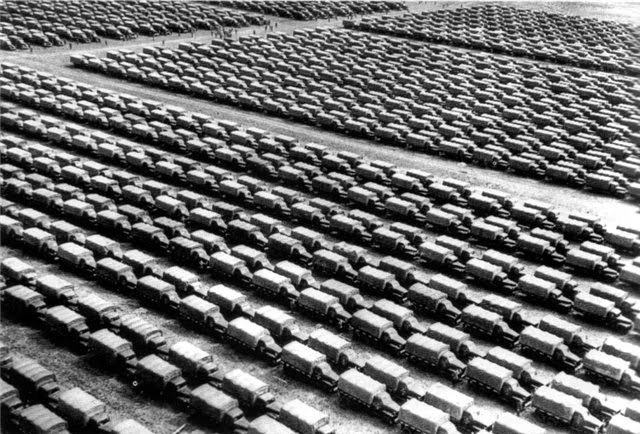 The answer to Zhukov’s problems were the free supply of thousands of Studebakers to resupply lost vehicles, move artillery and crews, and to haul infantry. After the Soviet victory at Kursk it became clearly obvious that the Studebaker US6 was to play a critical role for the advancing Soviet forces. In appreciation, Soviet leader Joseph Stalin himself sent Studebaker an official letter of gratitude from the Russian people.

MOSCOW — The late Marshal Georgi K. Zhukov, in memoirs published on Monday, says U.S. aid to the Soviet Union during World War II was crucial to the victory over Nazi Germany.

His remarks stood in contrast to occasional Soviet press articles that have given the impression that the U.S. assistance was minimal.

Zhukov’s assessment was important since he was chief of the Soviet general staff in the war and knew all major details of Moscow’s military effort. He died in 1974.

“We would have been in a difficult position without American gunpowder, we could not have produced the quantities of ammunition we needed,” he said.

“Without U.S. Studebakers (trucks), we would have had nothing with which to pull our artillery. They largely provided our front transport. . . . Producing special steels, necessary for the most diverse needs of war, also involved certain U.S. supplies.”

Who Plundered the Tsar’s Gold?
Italy to Invaders: "Get Ready to Pack Your Bags"
A Graveyard Called Europe
Genocide: The Roll Call of Dishonor
Homocide
Hitler's Final Address to the German People
The Revolt Against Civilization: The Menace of the Underman (Part 20)
South Africa: Massive Protest Against Murders of White Farmers
Tags:Lend LeaseMichael WalshMike WalshPre-WW2 AmericaTrotskyTrotsky's White NegroesWW2 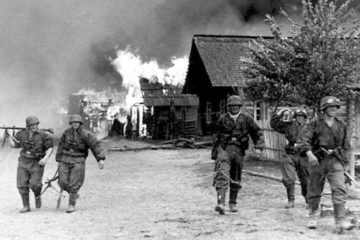 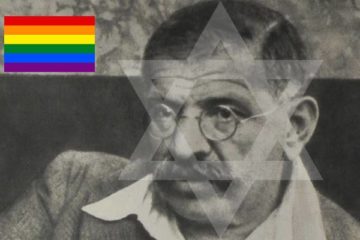 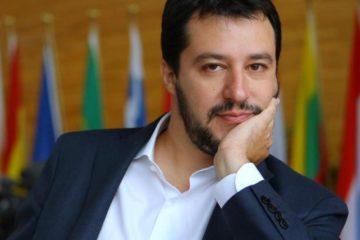