COPS, PROSECUTORS, and judges are always (that is to say, as a rule — the culture strongly encourages it) eager to attack Whites and undermine their civil liberties and human rights. It’s very safe compared to fighting crime, and good for their careers . . . not to mention a lot safer than policing non-Whites, which is physically dangerous and can easily bring the Sorosites, lynch-mob media, and police-politicians down on your back, shove you onto the street disgraced and jobless, or even send you to jail for “racism.” Who needs that! As a result of Political Correctness, attacking Whites no doubt feeds their egos and sense of self-righteousness as well. Of such simple elements is the crime of genocide made.

According to the news report below, fifteen FBI informants alone were involved in the Bundy case. I don’t know if any other agencies ran additional infiltrators. “Informants” here means face-to-face, one-on-one, group involvement. It ignores surveillance (“sigint”), database searches, Jewish hate group assistance or advice (if any), postal mail covers, rummaging through citizens’ trash, etc., etc. Those things were no doubt done as well, but they fall outside the “informant” (human intelligence, “humint”), rubric.

The federal prosecutor says the government has no duty to identify to the defendants at their trial who the informants were. “Assistant U.S. Attorney Geoffrey Barrow said prosecutors aren’t obligated to disclose any information identifying informants.” (“In all criminal prosecutions, the accused shall enjoy the right . . . to be confronted with the witnesses against him.”)

Throughout the “West,” Whites are high-priority targets of the government and law enforcement because any people (even Whites, hard as that may be to believe) deprived of fundamental rights and slated for genocide might potentially fight back against their destroyers. Historically they would have, without question.

The Bundy situation thus parallels many other cases, as when Germany’s NPD years ago was shown to be so full of German secret police agents that it was hard to know where the repressive agency of the state ended and the party began. And in Norway, as of 2013, the Norwegian Defence League, which had affiliations with the English Defence League of Tommy Robinson (though it was not controlled by it), was run by a coalition of Zionists and Norwegian secret police. This was revealed in an investigation by the Norwegian press.

Gary Larson, whose cartoon VDare chose to illustrate their relevant blog post, reprinted below, was an exceedingly funny, if offbeat, cartoonist. He retired years ago, while still quite young. 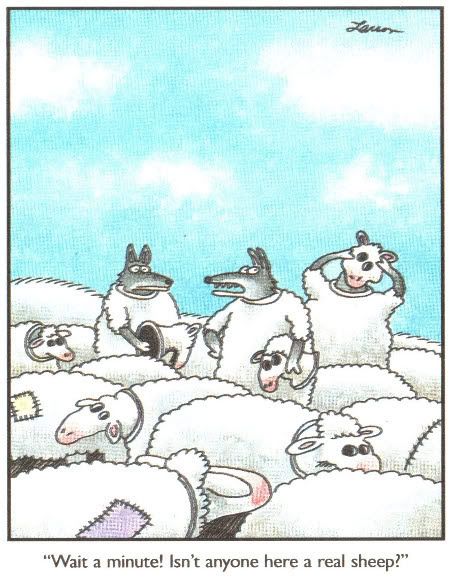 DEFENSE LAWYERS rested in the Oregon standoff case Monday after they called a witness who confirmed he was an informant for the FBI and acknowledged that he infiltrated the occupation of the Malheur National Wildlife Refuge and supervised the shooting range for several days.

The man who occupiers initially knew only by his alias “John Killman” was revealed to be Fabio Minoggio, a Las Vegas resident subpoenaed by the defense to testify after prosecutors declined to confirm if he was a government informant. …

Minoggio was one of 15 confidential informants who fed the FBI information about the occupiers, testimony showed.

Nine of the 15 were at the refuge for various lengths of time between Jan. 4 and Jan. 26, according to a statement that Assistant U.S. Attorney Craig Gabriel read to jurors. Those nine included the three who have been identified at trial: Minoggio, defense witness Terri Linnell of California and Mark McConnell, who was the driver of the Jeep that Ammon Bundy was riding in when he was arrested on Jan. 26.

None of the unidentified other six informants were at the refuge beyond Jan. 23, Gabriel told jurors.

Killman, defense lawyer Tiffany Harris pointed out in a written legal brief, was a participant in the firearms and military-style maneuvers training during the occupation and helped train one of the defendants, Jeff Banta, in hand-to-hand combat techniques.

He spoke with a French or South African accent to people at the refuge and his Facebook profile included a majority of friends who occupied the refuge, according to defense lawyers. Defense investigators learned Minoggio was born in Switzerland and had served in the Swiss army for 20 years. He was trained in “psy-ops,” weaponry and martial arts, according to Harris’ legal brief.

“We are dealing here with a situation of a confidential informant who is participating in the commission of the alleged offense,” defense lawyer Marcus Mumford said in court.

Earlier Monday, prosecutors had refused to confirm if the man who went by “Mr. Killman” was working for the government.

ISIS, Out of Arms, Near Collapse -- Until US Weapons Drop