FORMER STATE Representative David Duke dominated the final televised US Senate debate in Louisiana. In one of the most memorable remarks of the race, Duke said that Hillary Clinton should be charged with treason and face the electric chair. Duke also boldly defended his earlier criticism of what he termed “CNN Jews,” and courageously “doubled down” by referring to the domination of the media by that ethnic group. Duke remarked that, were executives of CNN and the other networks overwhelmingly Saudi Arabians, for example, it would be an issue of importance and legitimate concern — and it should be of equal concern that these media corporations are in fact largely run by Jews today.

“I’m not opposed to all Jews,” Duke said. “There is a problem in America with a very strong, powerful, tribal group that dominates our media and dominates our international banking.”

Despite attempts to bait and silence him, Dr. Duke stood firmly for his right to speak and utilize the time he had been promised by the debate organizers. He had to be forceful and insist in order to exercise his rights — and he did so.

Duke was the only candidate on stage to criticize the massive wars for Israel that have bankrupted this country, and he was the only one to address the massive non-White immigration that threatens and impoverishes the historic White nation of America. 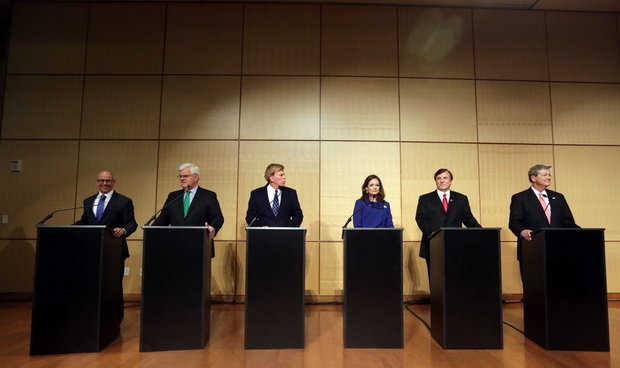 City police were called in to block more than 50 protesters — who objected to Duke’s White-centered political stance — from entering the auditorium, which was, ironically, on the campus of Black-centered and almost exclusively Black-attended Dillard University.

“Let us in! Let us in!” the protesters, some of them carrying “Black Lives Matter” signs, screamed, as they advanced on the police. Black Lives Matter (BLM) is a violence-prone race-based agitation group funded in large part by Jewish billionaire and globalist George Soros, who has funded regime-change violence around the world.

As the debate began inside, the BLM agitators began to force their way through the glass doors of the auditorium. Police used pepper spray, and the BLM members returned fire with pepper spray of their own. Ultimately, the BLM group was pushed back outside. Despite the flagrant violations of law and use of force by BLM, there were no arrests. Looking at the footage of the attack on the auditorium, there is no doubt in my mind that these thugs were determined to do violence to Dr. Duke.

Malcolm Suber, a long-time Marxist activist of part-Black ancestry, spoke for the BLM group: “We’re standing outside while (Duke) is inside under the protection of your (university) president. Your administration let the White devil on your campus.”

Dillard President Walter Kimbrough said in an interview earlier in the day the university wasn’t in the business of suppressing free speech, “even when we don’t agree with it.”

During the debate, other candidates also focused their attention on Duke, who, despite ferocious media vilification that possibly exceeds even that given Donald Trump, has a chance of reaching the runoff election. Democrat candidate Caroline Fayard virtue-signaled loudly, calling Dr. Duke “a snake,” looking from side to side for approval as she did so.

Front-running Republican and State Treasurer John Kennedy called Duke “a convicted liar and a convicted felon” for tax evasion. Duke pointed out that he had been persecuted for his political beliefs and that, even after suffering a year and a half in jail, the IRS eventually admitted that no taxes were due. During the sometimes-chaotic debate during which the moderator repeatedly attempted to silence him, Dr. Duke tried to say he had been forced to plead guilty in a rigged system under which an all-Black jury would have otherwise decided his fate.

Duke was at times treated differently than the other candidates: Once his microphone level was turned down very low, and on more than one occasion he was told he could have extra time for rebuttal, but was then cut off as soon as he began.

Dr. Duke was the only one to acknowledge the protesters during the debate. “There was a demonstration by Black Lives Matter because I stand up for you,” he said, referring to Louisiana voters, “I defend you.”

This Must Not Be Countenanced
The Atheist
A Misleading Article About Race in Scientific American
Canada: "Antisemitism" - Real and Imagined
Homosexuality as a Weapon
YouTube: David Duke Channel Reinstated
The Precious Six Million Pairs of Glasses
African Governments Commemorate the Role of Jews in Subverting White Rule
Tags:Black Lives MatterDr. David DukeJewsLouisianaPoliticsSenate

Julian Assange Ends The Suspense: "The Source Of Hacked Emails Is Not Russia"

Hillary for the electric chair 2016

For all you Trump fanatics: https://www.washingtonpost.com/news/post-politics/wp/2016/11/03/david-duke-does-deserve-a-bullet-says-donald-trumps-son-eric/
—

“[David Duke] does deserve a bullet. I mean, these aren’t good people, these are horrible people. In fact, I commend my father. My father’s the first Republican who’s gone out and said, ‘Listen, what’s happened to the African American community is horrible and I’m going to take care of it.’ “

That stupid son of his isn’t running for President. Trump is indubitably racially aware, at least to some degree, and even if he weren’t, he would help us. Killing political correctness alone would help us. Weakening the word “racist” to the point where someone routinely branded with that word gets elected President will help us. Jared Taylor believes he has healthy instincts.

Like most White Nationalist Trump-lemmings you are delusional. Trump’s ONLY instinct is for the immediate gratification of his own ego.

If he has any shred of decency left in him, Trump should publicly repudiate his son’s suggestion that someone murder David Duke, before one of his emotionally unstable followers takes him up on it.

In my state me and about a dozen other key people made sure Trump won the primary here.
And we are making sure Trump will win our state by a large margin.

Not to mention we have expanded our net work of like minded people and recruited many more due to Trump pushing the over tone window further right.

When we get a proper pro-white candidate to run here for governor, we will already have the ground game and setup for it.

I listened to the first 25 minutes and was disappointed with Duke’s performance. He seemed ill prepared for a panel debate with tight time limits. You need to have your best possible replies ready and state them convincingly with suitable voice and body language like a good actor. Duke seemed to need to think about his reply, was groping for words, and wandered off on sidelanes. You can’t do that when you have 1 min or even 15 secs to reply. Every word matters and every second counts, and you must perform like an artist on stage. Several of the other candidates did very well in this regard and were experienced. Duke needs to work harder and practice more.