Introductory Note by John I. Johnson: The author of this piece, the writer Fred Reed, doesn’t like Clinton — but he’s not thrilled about Trump either. He does not mention that everything he says below applies to every single White (that is, once-White) nation on Earth — nor does he mention who Lucretia works for.

MORE FUN in the Indispensable Nation: As we have all heard by now, according to Hillary, ardent of becoming National Basilisk, half of Trump’s supporters are evil and the other half losers, deplorables all. That is, she holds half of Americans in contempt. Unsurprisingly she said this in New York, which is barely America, and to a convention of sexual curiosities.

I frankly think her admirable. As she coughs, staggers, convulses, lies, pilfers, sells favors and lapses into intermittent confusion, she still has the courage to tell America that she loathes half of it. That’s candor.

Give her credit for consistency. She is always mendacious, firmly in the pockets of Wall Street, Israel, the Neocon hawks, and the arms industry, never  having accomplished anything on her own, always riding Bill’s coattails, having a disastrous record as SecState, always for sale. With her, we know what we will get. With Trump, it’s a roll of the very weird dice.

Ah, the Donald. While he unmistakably displays various presidential qualities — he can walk up stairs by himself, and his eyes usually point in the same direction — there is indeed a certain aleatory quality to the man. God knows what he might do. He shoots from the hip, saying all sorts of loopy but interesting things. Interesting if you live somewhere else. He talks  unflatteringly  about the other sex near open mikes, instead of away from them like everybody else.

The Donald merely makes me nervous, while Hillary makes me want to take poison. It is the difference between an acid trip and death by sinus drainage. His truly great strength is that he is not Hillary. The election is really a contest between placeholders for conflicting interests, for different views of the world. Few would want either if there were another choice.

Hillary’s attitude toward America has for years been implicit in our ruling class in New York. Having little in common with the rest of the country, they speak of most of it as Flyover Land, a realm of intellectual darkness and barbarism separating Manhattan and Hollywood.  So far as I know, this is the first time the elites have had the confidence, if not necessarily the judgment, to say it plainly.

Let’s not delude ourselves. America is ruled by the Five Cities, Boston, New York, Washington, Tel Aviv, and Hollywood. The rest of us just pay taxes. The heart of the beast is New York, the Ivies being its nursery and Washington its  storefront.

To a practicing curmudgeon, the presidential contest is amusing but unimportant. Hillary will win, whether she wins or not. She is just the wavefront of deep and fast-flowing currents of decay that cannot be stopped. Trump may try, but he cannot succeed. We live in a dying culture and, soon, a diminished country. It cannot be saved.

Not true? Add up the bits and pieces. We laugh in horror, some of us, primarily the older, at the decline of schooling, the courses like Batman and the Struggle for Gender Equity. Comic, yes. Yet in aggregate, these constitute an academic and civilizational collapse both profound and irreversible. Enstupidation does not happen in a healthy country. Who even wants to reverse this onrushing night? Not the universities, nor the teacher’s unions, nor a professoriat gone as daft as the “students,” nor the banks battening on student loans.

It is over. Hillary may start wars in her six months before going into a sanatorium. Trump may build walls. But the rot will go on. Tell me why it won’t.

American culture now drinks deeply from the ghetto, and there is no turning this around either. The country has achieved the dictatorship of the sub-proletariat. Someone said that when the lower orders found that they could vote themselves the treasury, they would. They can also vote themselves the culture, and have.

There is no solution. Complaining about degraded music, semi-literacy, and barnyard taste accomplishes nothing. Soon there will be none left who remember what has been lost. Once broken, the chain cannot be repaired.

It is over. Putrefaction is irreversible, either by Ronald or Lucretia.

The shift to the economic pattern of the Third World, the concentration of wealth in the hands of a few, proceeds apace and there is nothing to do about it. Impunity, normal in Guatemala, allows corruption to go unpunished. Think sub-prime. Hillary is as crooked as any president in Latin America, everyone knows it, and nothing happens to her.  The extremely rich,  the famous one percent,  control Wall Street, the media, Congress, banking, the social media. The well-being of all but the rich declines. It will go on. There is no way to change it. Who will do it? How?

It is over. Ronald can’t stop it. Lucretia doesn’t want to.

It goes rapidly now. Perhaps worst, because it paralyzes resolution, in a few short decades the country has lost all cohesion, whether cultural, racial, linguistic, or religious. In 1955, America was overwhelmingly White, Anglophone, Christian, and European, which provided enough unity to hold it together, and poor communications provided enough separation to maintain peace among groups that detested each other: Massachusetts and Alabama, West Virginia and California.

The US, once a nation, is now a group of angry minorities in the same place. Things that seem insane to half the country, such as making girls of twelve years share public bathrooms with any man interested in girls of twelve, are promoted by the other half as requisite for equality. Blacks are in open insurrection. The borders barely exist. The government cannot or will not enforce the laws. How can this change, other than to worsen?

Further, America is rapidly becoming a hive of narcissistic milquetoasts in extended adolescence, of delicates and Fauntleroy  unable to care for themselves. Those who read speak with the reason of Eloi and Morlocks, but few read. We elders read agape of the microaggressions and safe spaces, of cry-baby co-eds who sob in fear at seeing a mouse. Snowflakes they are called, and snowflakes they are.

The potential consequences of this are not easily grasped by those under fifty. The United States has been remarkably protected for decades. America’s wars are fought in other people’s countries. Except for 9/11 the public has never been subjected to the horrors routinely inflicted by America in Afghanistan, Iraq, Syria, and so on. Ever fewer Americans have been in a schoolyard fight, baited a hook, fired a gun, or lived a week in the woods. We are a coddled nation.

My saying this will bring forth much squeaking and gibbering to the effect that I am insecure and fantasizing about Marlboro Man, remembering a macho world that never was, a latent transgender and that I hate everybody. Only the last comes close.

But America is more fragile than it looks. Its people cannot feed themselves. The economy really can collapse. If civil unrest broke the link from farm to cities, in two weeks New Yorkers would be eating each other. Soft white urbanites eeeeking and squealing about guns cannot defend themselves. It is over. Watch. Trump, if elected, will be more interesting, Hillary a boring but more certain civilizational mortician, but both are chips floating on a fetid tide. 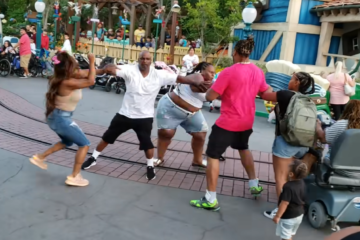 Wow! I think even John Kaminski could not have tolled the bell for America more darkly than Fred Reed here.

“American culture now drinks deeply from the ghetto, and there is no turning this around either.”