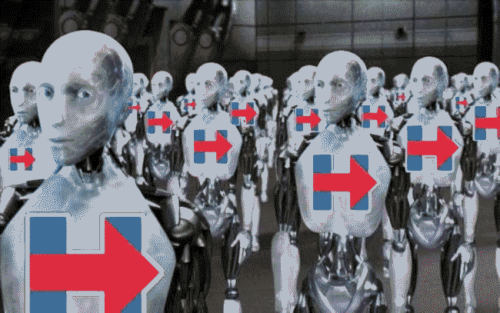 NOW THAT OCTOBER is here, the establishment is rolling out its dirtiest tricks. One of those tricks is to counter anti-establishment free speech with an army of trolls and “talking points”-programmed robots. This especially includes faux Hillary supporters and mocked-up anti-Trumpers.

Whether this presence is made up of real-life losers working for minimum wage, digital ghosts, or some combination of the two, we might never know. (We do know, however, that a pro-Hillary PAC used an online zombie army against Bernie.) They often give the appearance of being real life losers, able to respond to specific statements, but just as often they simply seem to be machines dribbling pre-packaged talking points and limited to a few simple themes.

Know Them by Their Agenda

The purpose of these bots and/or shills is to demoralize real, proactive people. Their comments will be idiot-level, meant to sow doubt, infuriate, depress.

Know Them by Their Personas

On Twitter, they are especially easy to spot because the markers are so consistent. In addition to the inane style of commentary, look for low followers and a generic persona.

The profile details are always what someone might make up off the top of their head, or what might be produced by a computer program mixing and matching random elements. Occasionally there is overt association with a sports team or some other aspect meant to signify real-world interests, but this is always subordinate to the droning political shilling.

The main, unmistakable marker, is shallowness. It is easy to tell if a person’s heart is in their efforts, or if they are simply trolling. Style, or a lack thereof, is the giveaway. It’s fun to defeat genuine shitlibs in a debate, but these people — or digital entities — cannot be knocked down or demoralized, because they have no dog in the fight. They will blithely rattle off campaign talking points and inflammatory statements, no matter what challenge is put forth. They are there to have an effect on you. Their minds, if they have minds, cannot be changed.

The best approach is to look for the markers, quickly ID the bot or shill, and then point them out to others. If it happens to be on Twitter, mute or block them after making others aware of them. Remember, the existence of these soulless…things… is an indicator of outright desperation. On the Internet, where real people set the agenda, establishment ideas and figures have next to zero human support. The introduction of paid shills and bots is an attempt to draw us back into their matrix, to make us feel as isolated and defeated as we did during the TV age. Expose them and then ignore, mute or block them. Most important, never let them faze you. They exist because we are winning.

Today's New York Times Reports on The Devastating Wikileaks Emails: Not One Word

“It is easy to tell if a person’s heart is in their efforts, or if they are simply trolling… — Nothing against anti-Marxists, but am I the only person who is irked by writers who can’t for the life of them make a singular pronoun agree with its singular antecedent? Didn’t we used to learn that in about the fourth grade? “Their” should only be used when referring to a plural subject. It’s amazing to this high school grad how politicians and journalists with advanced university degrees keep saying, “The media is controlled [by Jews].” The word media is the plural form of the word medium. Very few people in mass media seem capable of subject/verb agreement. The media are controlled by Jews. Fact! That was one of Dr. William… Read more »