THE QUESTION was asked: “The vacuum state contains fleeting electromagnetic waves and particles that pop into and out of existence. Atheists, something from nothing? Better than magic? Isn’t a consciousness (God) who created the universe is an even better explanation than a vacuum state?”

There are many different divine creation myths, and none of them can be distinguished as being better (more accurate) than any other creation myth in a way that all persons can agree on.

There have been many different scientific theories about the origin of the universe, but one of them has become distinguished as being better than all of the others in a way that all persons can agree on.

See the difference? Not yet? Then let me go into a little more detail.

Once parts of the truth have been discovered, they are used to predict what else might be true.

Truth in science is a matter of confidence. The lesson we keep learning, over and again, is that nothing should be regarded as being settled forever. Relativity overturned classical physics, but classical physics remains very useful as a simplification that gives good enough results most of the time.

But already relativity is known to have its own shortcomings (such as what happens to space and to time very near to the singularity of a black hole) which means there is another theory to which relativity will be the approximation that is good enough most of the time. We don’t yet have that next theory; we only know that there must be one, yet to be discovered.

More important than is any particular truth is the manner by which you pursue truth.

There is a branch of philosophy called “epistemology.” An epistemology is a rationale by which someone claims to have knowledge, or to know truth. Epistemology isn’t what you believe to be true. It is, instead, how you justify your claims for knowing what the truth is.

Every group holding to a dogma has, as part of that dogma, the belief that they are infallibly and with utter certitude correct in holding to that dogma. The circularity of that reasoning, and hence the logical invalidity of it, however obvious it might be to others, is lost on them. Most of the time, this sort of attitude is pure presumption. However, there can be exceptions. Sometimes one group’s point of view is right about something, even if hasn’t really been proved, while all of the other groups are wrong.

Religious persons often say that their scriptures are God’s word on certain matters, such as what happens to people after they die, and the conditions for having good Afterlife circumstances rather than poor ones. But someone of a different religion might disagree, and I don’t think that aligning my thinking with the beliefs most common in my native land is a valid way of answering metaphysical questions.

Truth is not something that authority can create by decree.

Truth is not something that you can find by the method of voting on what the truth is.

There’s another, and a better, way to find truth. Use an empirical method, such as the scientific method. It might take a while to work, but when it does work, it works for everybody. Anyone with the intelligence and the material prerequisites can do the same research, carry out the same experiments, get the same results, and usually reach the same set of conclusions about what the truth is. You might need a microscope, a telescope, or a chemical laboratory. But you won’t need a priest.

Because, really, there is no “my truth” and “your truth” and “their truth.” There is only the truth. And opinion is either in accordance with the truth, or else it’s simply wrong. The only question worth arguing is: How do you know when a method for seeking the truth actually does succeed in finding it?

In summary, you know that a method for seeking truth works when it has a history of giving to people powers that they did not have before.

Valid methods for seeking truth do this because useful truths are a subset of all truths, and it is a subset in which people have a particular interest and to which they devote a considerable amount of their time. Any efficacious method for pursuing truth, used by human beings, will uncover a significant proportion of useful truths over time.

The only method for seeking truth that actually works, so far as is known, is empiricism augmented by logic. In other words: science.

Religious metaphysics cause factionalism because God doesn’t really exist, except as an abstraction that different groups of people have defined in different ways. But you will notice that the nature of gravity or the nature of electricity has not caused any similar factionalism. That’s because the principles behind those forces were discovered by empirical methods, which give the same knowledge to Europeans, to Arabs, to Chinese, or to anyone else who uses them. 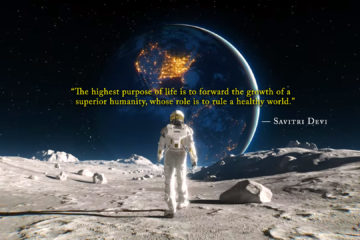 You wrote: “Religious metaphysics cause factionalism because God doesn’t really exist, except as an abstraction that different groups of people have defined in different ways.” This argument against “factionalism” is one that can lead to arguing for a blending, first of beliefs and then of humans. Proper factionalism is the friend of Whites who believe that we must separate from other races and that we must up our White birthrate. And, arguing that science is the way to find truth is fine, but one must understand that we must also use science in dealing with the human brain and the way it works, and not deny how beliefs in things unseen and unproven are sometimes necessary to move people to do the right things. People will argue forever whether all… Read more »

David Sims is certainly right insofar as the nonexistence of the “God” of the preposterously fictional Jewish scriptures goes. Jehovah is utter nonsense. The chances of the Hebrew scriptures being true are approximately the same as the chances that Hillary Clinton could be a secret White nationalist or that you will win the lottery without having a ticket. But is the Universe evolving to a higher and higher understanding of itself? Is our race the vanguard of that evolution? Is it possible that the ultimate result of that evolution will be a state that we, with our limited understanding, could only describe as godlike? Even the honest skeptic would have to admit the first two approach certainty and the last is a real possibility. Nietzsche and others have posited that… Read more »

I love science. I was educated to the level of PhD. I specialized in the area of Organometallic Chemistry. My work was published in several peer reviewed scientific journals and I made a few contributions to teaching texts dealing with several topics in advanced chemistry. Now retired and old I operate a home based chemistry and physics laboratory, a small electronics laboratory and a small machine shop. My home looks more like ‘Frankenstein’s Laboratory’ complete with Igor – one of my children. I love and I live science, but above all I am a practical man. The future of the white race hangs in the balance, and our future does not look good. We have little time left to engage in mind games and certainly no time to contemplate our… Read more »