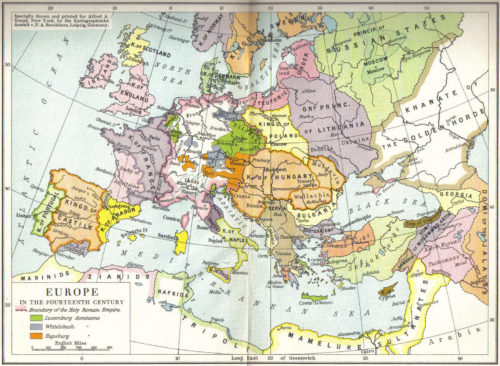 JETTISON POLITICAL correctness and pre-1945 European colonialism can be viewed as an expression of demographic growth, dominance, racial health, and vitality. Nobody centrally planned or thought it through beforehand, or while it was happening. It transpired over centuries, encompassing many generations of people who lived and died — well beyond the collective time horizon of Whites for deliberate planning purposes. In retrospect, and from a broad perspective, it represented the instinctual behavior of a people. (ILLUSTRATION: Before departure: Europe on the eve of expansion (14th century).)

By the same token, the ignominious, virtually instantaneous collapse of colonialism following WWII coincided with loss of racial confidence, vitality, and self-governance. By then, Whites no longer controlled their own destiny. As with the opening of the immigration floodgates, the hasty retreat from empire preceded White population collapse, which did not begin until after 1965.

In addition to racial dominance, population size must be taken into account whenever migration and the exercise of political power are concerned.

This is as true of Jews, by the way, as it is of everybody else, despite the unique ecological niche they occupy. There is no objective evidence, no replicable procedure to verify that Jews constitute as small a population as is claimed. It is true that they operate secretly, with a degree of conscious, coordinated, conspiratorial behavior unmatched by any other race — indeed, it is vastly underestimated by everyone, and a cornerstone of their supremacy. But the more minuscule you accept their population to be, the more intrigue you must allow in order to account for their inordinate power. In politics, demographics applies to everyone — unless, of course, you believe (as many atheists and anti-Christians do) that Jews are divine.

Though the Portuguese began systematically exploring the Atlantic coast of Africa as early as 1419 under the patronage of Prince Henry the Navigator, the third son of John I, King of Portugal, and explorer Bartolomeu Dias rounded the Cape of Good Hope (the southern tip of Africa) in 1488, Columbus’s first voyage to the New World in 1492 on behalf of Spain is often taken as the cutoff point to mark the beginning of the modern age of discovery, exploration, and European colonization.

At the outset of the period, in 1483, the three largest population groups in the world were East Asians with 138 million people (China 120 million, Japan 15 million, and Korea 3 million), Asian Indians with 110 million, and White Europeans with 73 million. Between Europe and India the Near East held 25 million people, 2.5 million of whom were nomadic herdsmen. (These and subsequent 1483 population figures are from Colin McEvedy, The Penguin Atlas of Modern History (to 1815), 1972, pp. 8-9)

These people were virtually all farmers, not hunter gatherers or city dwellers. Prior to the 1800s, industry and towns had only marginal demographic significance.

Over the next 500 years, the White race grew at a rapid pace, enabling large-scale emigration from Europe and above replacement fertility at home and abroad simultaneously. Colonization was thus a sign of demographic strength.

On this map, which shows ten European empires at their maximum extent, the large territorial expansion of Russians into Siberia can clearly be seen. The history of the expansion is little known to Whites.

From 1500-1800, after the power of the Mongols and Turks had been broken, intermittent movements eastward by European Russians swelled to a steady flow. By 1697 Siberia had 150,000 Russians and 125,000 natives.

Settlements were founded on the Pacific coast by 1763, and the first Russian colony in North America was established in 1784 on Kodiak Island off the southern coast of Alaska. Russian fur traders, who plied their trade as far south as Canada and California, built Fort Ross near San Francisco Bay in 1812. Still, the penetration of North America did not involve large numbers of people. When the US bought Alaska from Russia in 1867, only 400 Russians resided permanently in the entire territory, and the maximum number ever was 700.

In Siberia it was different. By 1965 the population had reached 30 million, or 15 percent of the USSR’s total. (No telling how many were political prisoners in concentration camps!) Non-White natives were as scarce as Amerindians and Eskimos in the US and Canada. (Carleton Coon, The Living Races of Man, 1965, p. 300)

Despite the loss of large territories such as those belonging to Spain and Portugal in Latin America (where European race-mixing was completely out of control), the late 19th and early 20th centuries, as one mainstream writer expressed it, “witnessed an unprecedented extension of European power over non-Europeans.”

The largest empire of all was Great Britain’s. In the last quarter of the 19th century it attained a position more nearly approaching world mastery than perhaps has ever been achieved by any other power in history. It was not merely that Britain had amassed what was historically the largest empire ever known. Britain maintained its long lead over competitors in industrial innovation and production until almost the end of the century. (Rand McNally Atlas of World History, 1981, p. 124)

In the 19th century Britain had more foreign trade than any two other countries combined, produced one-third of the world’s industrial output and more coal than all other countries, led in the production of iron, was the world’s largest foreign investor, dominated the globe’s transportation and communications systems, supplied the capital and technology to construct railways on five continents, and owned most of the world’s undersea cables. The pound sterling formed the basis of the international payments system. The British merchant fleet had more tonnage than all other countries put together, and the Royal Navy was the most powerful seaborne force in the world.

A glance at the map suggests what a staggering task it must have been to efficiently administer such a far-flung global empire during the period in question. It would seem that a fair amount of delegation of power and autonomy on behalf of the governors must have been allowed.

Europe’s globe-girdling colonial empire has been briefly outlined here from a non-apologetic perspective. I have eschewed contemporary ideological judgments and ultra-fine moral distinctions that our enemies one-sidedly ignore for themselves anyway, and looked at matters from a strictly natural history, biological-historical rather than moral-philosophical standpoint. But the amazing story of Europeans’ exploration and conquest of the planet contains a forward-looking lesson as well.

Europe, the United States, Canada, Australia, New Zealand, South Africa, South West Africa (Namibia), Rhodesia (Zimbabwe), and Siberia (Russia-in-Asia) should all be fully reclaimed by, and reserved exclusively for, Whites as part of a Greater Europe or White Imperium, with the exception of set-asides for native inhabitants such as Amerindians in North America and Aborigines in Australia.

This is not as far-fetched as it sounds. Anti-White, Left-wing elements already entertain comparably ambitious dreams. There is no reason why Whites should not develop similar plans of their own.

The strategic location of these neo-Europes in every corner of the globe, blessed with moderate climates and rich stores of natural resources, colonized by Whites in the modern era and still ours until recently, provide the solid foundation for a major, well-populated, worldwide race-based federation or confederation capable of securing the existence of our people and a future for White children on this planet for centuries to come.

Katrina and the Black Tsunami

The late Samuel Francis, too, viewed White colonialism unapologetically. In an essay entitled The Roots of the White Man, originally published in two parts in American Renaissance in November and December 1996 under the pseudonym “Edwin Clark,” he wrote: “The dynamism of the Aryans is clear enough in their earliest and most obvious habit of invading other peoples’ territories and conquering them. All of these early Aryans were intensely warlike, and their gods, myths, and heroes reflect their devotion to the martial virtues of courage, discipline, honor, the goodness of conquest, and skill in arms and sports. Virtually everywhere they moved, they conquered . . . “The dynamism of the early Aryans is also clear in their interest in travel, maritime exploration, colonization, and discovery. The Semitic Phoenicians also displayed… Read more »

The Anglo Commonwealth: a pro-White ethnostate successor to the British Commonwealth. 1) The Anglo Commonwealth is a federation/alliance/multinational-state for people of mainly British (English, Welsh, Scottish, Cornish, Manx, Irish, Ulster-Scottish, Orcadian and Channel Islander) descent. It is composed of four nations; Great Britain, Canada, Australia and New Zealand, along with numerous overseas colonies of those nations thereof. 2) While Britain, Canada, Australia and New Zealand are each sovereign and autonomous, a treaty for the sake of affirming their unity and solidarity on the international front will be the grant of federal citizenship for all Anglo/White inhabitants, allowing to move and reside freely in each other’s homelands, given their common British heritage. 3) The indigenous reservation-lands in Canada, Australia and New Zealand will be considered for continued protectorate status or be… Read more »

That is an excellent idea. The Nation-State is becoming increasingly obsolete due to trade, communications, and mass transit. We need to thinking in terms of supra-nationalism, the greater nationalism of the race. Sort of like think racially and act globally. By the end of the century, China will surpass the United States both militarily and economically. Also by the turn of the century, Africa will have 4.5 billion people with Nigeria becoming the third most populated nation on Earth behind China and India. Nigeria cannot even feed the people it already has. Where will these excess Nigerians go? To the European Union, to Anglo-America, to the nations of the Anglo-Sphere! White people really are clueless about what is coming their way! I would propose something like the United White Commonwealth… Read more »

The British Commonwealth (majority White countries of the Commonwealth) are clones of Britain, and the bastions of British civilisation. It’s one thing to repatriate the Third Worlders in Britain, but there are other anglo-nations and people like us in those nations. I would have us allied and working together on a global-level. And on a global-level, we may out-compete China. This all-White world power, let’s call is Albion Magna (Greater Albion), would need to trade with friendly nations who share it’s race, or culture, or equal it economically. We’ll ignore Third World nations – no foreign aid, no immigration; nothing! Subsaharan Africa will have to fend for itself. Haiti, Barbados and Jamaica will be ignored; even the British/Albion Overseas islands (many of whom are majority-black), unless we can repatriate all… Read more »