Establishment in Panic Mode Over Uncovering of Rigged Election

This controlled media interview with Pat Buchanan shows they are desperate to “restore faith” in their rotten, corrupt system.

EDITOR’S NOTE: The rising popular awareness of the utter corruption of our “democracy,” discussed in Pat Buchanan’s recent column below, has the Jewish power structure running very scared indeed.

PRESSED BY MODERATOR Chris Wallace as to whether he would accept defeat should Hillary Clinton win the election, Donald Trump replied, “I will tell you at the time. I’ll keep you in suspense.”

“That’s horrifying,” said Clinton, setting off a chain reaction on the post-debate panels with talking heads falling all over one another in purple-faced anger, outrage and disbelief.

“Disqualifying!” was the cry on Clinton cable.

But what do these chattering classes and establishment bulletin boards think the Donald is going to do if he falls short of 270 electoral votes?

Lead a Coxey’s Army on Washington and burn it down as British General Robert Ross did in August 1814, while “Little Jemmy” Madison fled on horseback out the Brookeville Road?

What explains the hysteria of the establishment?

The establishment is horrified at the Donald’s defiance because, deep within its soul, it fears that the people for whom Trump speaks no longer accept its political legitimacy or moral authority.

It may rule and run the country, and may rig the system through mass immigration and a mammoth welfare state so that Middle America is never again able to elect one of its own. But that establishment, disconnected from the people it rules, senses, rightly, that it is unloved and even detested.

Having fixed the future, the establishment finds half of the country looking upon it with the same sullen contempt that our Founding Fathers came to look upon the overlords Parliament sent to rule them.

Establishment panic is traceable to another fear: Its ideology, its political religion, is seen by growing millions as a golden calf, a 20th-century god that has failed.

Trump is “talking down our democracy,” said a shocked Clinton.

After having expunged Christianity from our public life and public square, our establishment installed “democracy” as the new deity, at whose altars we should all worship. And so our schools began to teach.

Half a millennia ago, missionaries and explorers set sail from Spain, England and France to bring Christianity to the New World.

Today, Clintons, Obamas and Bushes send soldiers and secularist tutors to “establish democracy” among the “lesser breeds without the Law.” 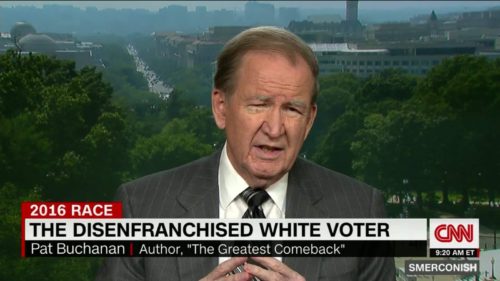 Unfortunately, the natives, once democratized, return to their roots and vote for Hezbollah, Hamas and the Muslim Brotherhood, using democratic processes and procedures to re-establish their true God.

And Allah is no democrat.

By suggesting he might not accept the results of a “rigged election” Trump is committing an unpardonable sin. But this new cult, this devotion to a new holy trinity of diversity, democracy and equality, is of recent vintage and has shallow roots.

For none of the three — diversity, equality, democracy — is to be found in the Constitution, the Bill of Rights, the Federalist Papers or the Pledge of Allegiance. In the pledge, we are a republic.

When Ben Franklin, emerging from the Philadelphia convention, was asked by a woman what kind of government they had created, he answered, “A republic, if you can keep it.”

Among many in the silent majority, Clintonian democracy is not an improvement upon the old republic; it is the corruption of it.

Consider: Six months ago, Virginia Gov. Terry McAuliffe, the Clinton bundler, announced that by executive action he would convert 200,000 convicted felons into eligible voters by November.

If that is democracy, many will say, to hell with it.

And if felons decide the electoral votes of Virginia, and Virginia decides who is our next U.S. president, are we obligated to honor that election?

In 1824, Gen. Andrew Jackson ran first in popular and electoral votes. But, short of a majority, the matter went to the House.

There, Speaker Henry Clay and John Quincy Adams delivered the presidency to Adams — and Adams made Clay secretary of state, putting him on the path to the presidency that had been taken by Jefferson, Madison, Monroe and Adams himself.

Were Jackson’s people wrong to regard as a “corrupt bargain” the deal that robbed the general of the presidency?

The establishment also recoiled in horror from Milwaukee Sheriff Dave Clarke’s declaration that it is now “torches and pitchforks time.”

Yet, some of us recall another time, when Supreme Court Justice William O. Douglas wrote in “Points of Rebellion”:

“We must realize that today’s Establishment is the new George III. Whether it will continue to adhere to his tactics, we do not know. If it does, the redress, honored in tradition, is also revolution.”

Baby-boomer radicals loved it, raising their fists in defiance of Richard Nixon and Spiro Agnew.

But now that it is the populist-nationalist right that is moving beyond the niceties of liberal democracy to save the America that they love, elitist enthusiasm for “revolution” seems more constrained.

What goes around comes around.

Ronald McDonald or Lucretia Borgia?: In the Long Run, We Are all Dead
A White Workers' Movement: An Open Letter to Donald Trump, part 1
Our Color Revolution
A Lesson in Democracy
Swedish Family Forced From Their Home; Government Says it’s for Immigrants Now
Generation Z Whites: Massive Swing Rightward
Soros: Trump Will Win Popular Vote, Lose Electoral College
We Will Not Vote Our Way Out
Tags:DemocracyDonald TrumpGovernment CorruptionPat BuchananThe System

Establishment in Panic Mode Over Uncovering of Rigged Election