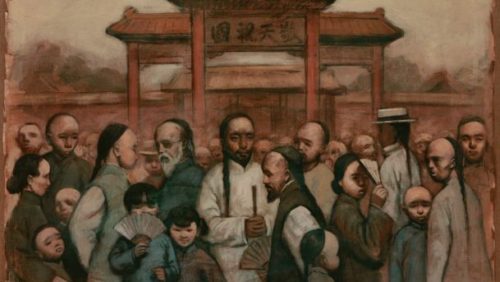 A SMALL GROUP of Jews in Kaifeng, the ancient Chinese imperial city on the Yellow River, are the latest target of a government crackdown on unapproved religions and foreign influence, the New York Times reported. (ILLUSTRATION: The painting “Kaifeng Jews,” by Yin Xin)

Established over 1,000 years ago, the Kaifeng Jewish community has undergone a rebirth in recent decades, with activists holding religious services, classes on Judaism and proposing to rebuild the community’s ancient synagogue. Some have even immigrated to Israel.

The municipality tolerated their activities for years, seeing the Jewish link as a magnet for tourism and investment, but that ended last year, when the crack-down began. Organizations that helped foster Jewish rediscovery have been shut down, Jewish residents were prohibited from gathering to worship Pesach and other holidays and relics of the city’s Jewish past have been removed from public places.

“The whole policy is very tight now,” said Guo Yan, 35, a tour guide who runs a small museum about Kaifeng’s Jewish past. “China is sensitive about foreign activities and interference.”

Quite why they are regarded as a threat is unclear, but since last year they have become subject to tight religious control by the government of President Xi Jinping. “They don’t understand us, and worry that we’re being used,” said a local businessman who supported the religious awakening.

Local Jews do not attribute the crack-down to anti-Semitism, which is relatively rare in China. “It is fear about religion, not just us Jews,” the businessman said.

But the current clampdown has gone much further than previous ones, residents said. Some blamed a report in the New York Times last year in which a city official attending a Pesach banquet spoke sympathetically about the revival, apparently violating government guidelines.

There were also rumors that a Jewish woman from Kaifeng had won asylum in the United States after claiming religious persecution.

Two Western organizations which had set up offices in the city and were offering classes in Hebrew, Judaism and Jewish history closed down after their local employees came under police scrutiny.

Even signs of the historical Jewish presence in the city have been erased. An inscribed stone marking the site of the old synagogue was removed from the front of the hospital that occupies the grounds an ancient well, said to be the last visible remnant of the synagogue, has been buried under concrete and earth.

Jews can still gather in small groups in their homes to pray, and there have been no arrests, the local Jews said. But they are being closely monitored by police and state security officers.

The Precious Six Million Pairs of Glasses
Bruno Bauer: Young Hegelian
Holocaust Day, Again and Again and Again
Covid-21
It Could Happen to Anyone
China and Eugenic Genetic Engineering of Humans
Fake Hate Crime is an Ancient Jewish Tradition
'After Putin, There Will be Another Putin’ — Jews Again Leaving Russia
Tags:AsiaChinaEthnostateJewish ReligionJewsThe Yellow Peril

Russia: US Openly Inviting its Jihadi Allies in Syria to Launch Terror Attacks on Russia 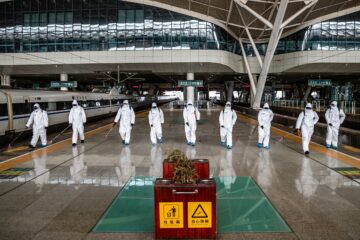 That’d be some rare thing I’d agree with CCP.