POPE FRANCIS told a World Jewish Congress delegation that migrants have enriched Europe and need to be integrated into society. (ILLUSTRATION: Pope Francis leads a mass marking the Jubilee for Catechists in Saint Peter’s Square at the Vatican on September 25, 2016.)

“Europe often forgets that it has been enriched by migrants,” the pope told the Jewish leaders at an audience Monday evening at the Vatican that was described as taking place in an atmosphere of “great cordiality and friendship.”

“Europe is closing itself up. Europe is lacking creativity. Europe has a falling birth rate and problems of high unemployment,” the pope said.

He added, according to an account of the meeting issued by the WJC: “We need to reflect on integration, which is important. The people who committed the terrorist attacks in Belgium were not properly integrated.”

Francis urged Christians and Jews to cooperate in battling hatred and brutality.

“We need more friendliness and kindness, and we should not be afraid to speak out against brutality,” he said, according to the WJC report. “We should go on a joint journey together to make the world more secure. We need to speak out for peace.”

The delegation of Jewish leaders was led by WJC President Ronald Lauder, who told the pope that Jews had “all been immigrants.”

Ahead of Rosh Hashanah, Francis wished Jews a sweet new year and reiterated his view that anti-Semitism is contrary to true Christian belief.

Bankers, Counterfeiters, and Applying Godwin's Law to Stefan Molyneaux
Jews Hunting Tucker
This List of US, Pro-Israel Pressure Groups is Extraordinary -- 'The Israel Lobby -- a List'
Who's Really the Extremist? - On the Insanity of Today's Overton Window
A Word About Miscegenation
The Making of Presidents
Homosexuality as a Weapon
Sheldon Adelson Is Ready to Buy Presidency
Tags:ChristiansDiversityEuropeJewsNon-White ImmigrationPope FrancisRefugees

Do some real work, in real clothes, Pope. Get your sweet soft hands calloused. Feel your womanly muscles aching and becoming stronger.

Do something to actually deserve those delicate bon-bons that you are so fond of eating; although I’ll bet that if you actually did a man’s work that you would leave all that feminine la-ti-da food to the other manhood-challenged clerics, who spend all day oogling the fine young men of the Swiss Guard.

Maybe then you will get a more realistic view of the real world, not the one of your baby Jesus myth.

Pope Boniface VIII was a corrupt power-mongerer, making even Dante Alighieri his enemy in Italy. Then the Pope used to sell indulgences, making Martin Luther his enemy; now the Pontiff is selling political suicide and political correctness, making White people his enemy. The Roman Church never changes its corruption; only its cant.

I used to have a respect for the Catholic church, after all, it’s left amazing art and architecture, but this man, is not only a disgrace, is an enemy of our interests

Thanks Arvin Prebost! His predecessors ruled over
the remains of Rome for 1500 years, commonly referred to as the
“Dark Ages,” and deservedly so! Now the Jews seek to do the same
thing on a planetary scale! Little wonder Elon Musk wants to go
to Mars! 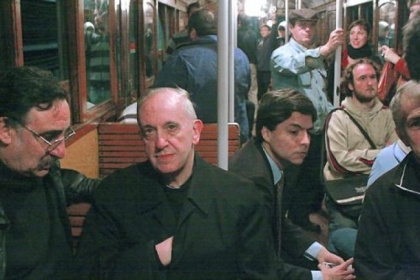 He has recently praised communists. As allegedly the exceptionally compassionate ones. In spite of the mass genocides, including from famine, by Lenin, Stalin, Mao Zedong. In spite of the barbaric commie terrorism in his native Latin America. A commie Pope? And one who doesn’t seem to care much about the European people in Europe and the US.

Quite simply, the Pope needs to go away……

He seems extremely naïve. Even though he is the head of the oldest and largest branch of the Christian faith, he ignores the fact that most of the “migrants” to whom he refers are not Christians. The more of them that Europe receives, the less Christian Europe becomes. And what does he mean by “properly integrated?” If they become Marxist homosexuals like Belgium’s Prime Minister Elio di Rupo will they have been “properly integrated?”

I don’t think this pope is “naive”. I think he is a conscious agent of the New World Order conspiracy, which has as its major aim white genocide through mass non-white immigration. His task as the head of an institution that still inspires respect among more than a billion people, is to sell white suicide as a supreme Christian virtue. And he plays his role with a great deal of gusto. May he burn in Dante’s deepest hell !

I’m not quite convinced that the pope is a “conscious agent of the New World Order conspiracy.” This would be likely only in the event that Archbishop Lefebvre was correct about there having been Masonic infiltration of the Church at its highest levels for the last six or seven decades. Of course, this is certainly possible, but it would not have to be true for the pope to have arrived at the positions that he currently takes. I believe it was Pope Benedict XVI who pointed out that priests are influenced by secular culture just as laity are. Most likely the globalist, multiculturalist propaganda that is ubiquitous in the West has been sufficient to convince Pope Francis that there is something wrong about the former Catholic teaching, “Europe is the… Read more »

Follow the money. Who will be the next Treasurer now that Cardinal Pell has been jailed? I believe Pell’s protestation of innocence.

IF Europe needs a reawakening through non-white creativity, drive and entrepreneurship, shouldn’t it be Europeans that willingly emigrate to non-white nations to be fully immersed in the culture exemplifying these traits, rather than taking the non-whites out of their homelands and putting them in a foreign culture? Maybe the Pope should think more and pray less.

“Europe often forgets that it has been enriched by migration..”