Look Carefully at This Picture: Jews Did This

LOOK CAREFULLY at this picture. It is shocking. A White couple, far from old, with a four-year-old child — a White couple whose life was so empty, purposeless, and full of despair and sadness that the only way out they could see was the oblivion of narcotic drugs.

But most of these victims are good people. People whose jobs were taken by invaders or outsourced to non-Whites overseas. People whose sons or daughters were killed in the wars for Israel we are still fighting. People whose sons or daughters succumbed to racial mixing propaganda, and ended their family’s line forever — and broke their parents’ hearts. People who were told that drug use and hanging out with Blacks were “cool” by decades of “hip” Hollywood films. People who were told their entire lives that they were worthless, evil, bigots, “racists,” and “privileged,” and whose only “moral” purpose was to help in their own dispossession. People who were constantly mocked and denigrated as “racists,” “rednecks,” “whitebread,” “flyover folk,” “breeders,” and ten thousand other insults by “sophisticated” Jewish pundits, academics, “stars,” and cultural arbiters.

The picture you see above is just one one-millionth of the consequences of the Jewish presence and predominance in our society. Never forget it.

From the Independent and National Vanguard correspondents:

AN OHIO police department has shared on social media a photo of a White couple who passed out, overdosed on heroin, with their four-year-old in a car.

Police in the Ohio city of East Liverpool said the intention of posting the images on their Facebook page was to deliberately shock people.

But the officials have found themselves at the centre of a debate about whether they are exploiting victims — and a child — after sharing pictures showing two overdosed heroin addicts passed out in a car. In the back seat of the vehicle sits a four-year-old boy.

“We feel it necessary to show the other side of this horrible drug. We feel we need to be a voice for the children caught up in this horrible mess. This child can’t speak for himself but we are hopeful his story can convince another user to think twice about injecting this poison while having a child in their custody,” said the posting by East Liverpool Police Department. 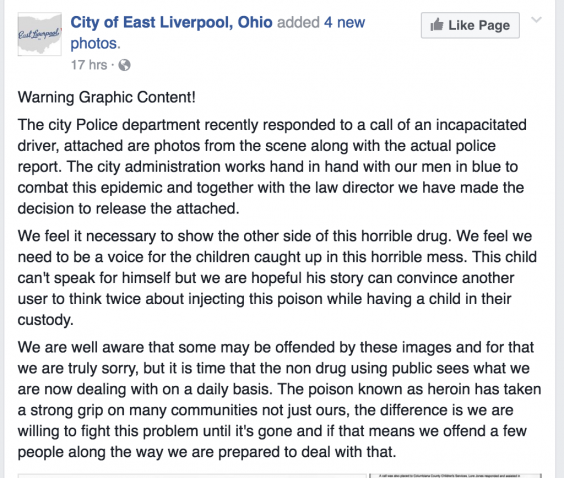 “We are well aware that some may be offended by these images and for that we are truly sorry, but it is time that the non drug using public sees what we are now dealing with on a daily basis.”

It added: “The poison known as heroin has taken a strong grip on many communities not just ours, the difference is we are willing to fight this problem until it’s gone and if that means we offend a few people along the way we are prepared to deal with that.” 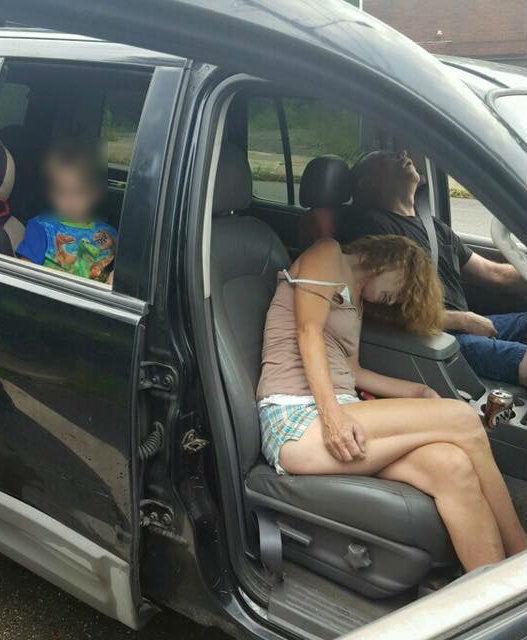 NBC said that police were alerted to the vehicle when an officer saw a Ford Explorer driving erratically and then slamming on the brakes as it approached a stopped school bus that was dropping children off.

When the officer approached the driver, his head was bobbing and his speech was almost unintelligible. The driver told the officer he was taking his front seat passenger, who was passed out, to the hospital.

Opioid addiction is a massive problem in many of the heartland states of America. Experts have linked its spread to poverty and the impact of economic decline in many traditional manufacturing communities.

The decision by the police in East Ohio sparked heated debate on its Facebook page. Many posters said they believed police were doing the right thing by highlighting the problem. Others said that the child’s face should have been blurred, and he should not have been identified.

Oh well, that’s the way the cookie crumbles. It’s a brutal world out there.

Most ODs are accidental.

We have always had weak people in our ranks – and we always will. I know of many people who have gone through extreme hardship and survived. They never took drugs – they never used drugs to medicate their problems – problems caused by their own misjudgment or problems foisted on them by the Jews. I see one every time I look at the mirror – the product of a bad marriage, divorce, loss of assets and bankruptcy. At one point I was living out of the boot of a car. It took eight years to recover but I recovered mentally, financially and professionally. I eventually secured full custody of my children. The experience did many things for me. It made me tough. It made me strong. It gave me… Read more »

Addiction seems to me to be an expression of cultural dysfunction in the normal field of otherwise healthy European association. These people don’t strike one as especially weak or morally culpable in this turn. The causes clarified in the article are certainly accurate. Obama’s Afghanistan, and the Military racketeered Opium projects there, as well as, La Raza libertarianism from Atzatlan have served the interests of the ‘intelligent’ 2%.

In jewish media monopoly terms, it is interesting that this image of profound suffering and defeat is cleared for public perusal, while websites like “Don’t Make the Black Kids Angry” which look at the causes of white suffering and alienation are casually cancelled in service of anti-white genocidal semitic polemics.

It is indeed, “good for the Jews” and we should help our kinfolk to connect the dots. It is our life mission, in fact. Failure is not an option as failure means the death of our race.

Environment starting in utero causes mental illness and addiction. People that are addicts always have a dual diagnosis.Cultural dysfunction in America is a major understatement.People “self medicate” due to trauma, depression, personality disorders, anxiety, PTSD…and he like. being a JEW does not support any evidence of a proximal cause of addiction.That is Goebbels type propaganda and now Trumps type of propaganda.You have to have somebody seemingly “inferior” to blame you ills in life on, be it a Jew, Muslim, Extremist Evangelical, or whatever.None of you “White Supremacist” in America are of a pure race, you are mongrel dogs. I am an actual German living in Germany and your White racist groups are even more pathetic than the few nut jobs in Germany that are residuals from their “Grand Pa Pa”… Read more »

I’m not sure whether one species can branch off into another species – it’s convoluted – but I do appreciate Mr. Strom’s compassion. It’s very “un-nazi” like for those who have swallowed the poison oozing from the parasites control of information gland, and are thus stuck in the disgusting mindset it produces.

I read a quote in book that, “by the end of the 70’s, most American families were train wrecks.” That sounds about right to me. I turned 14 years old in November of 1980. Lucky me.

The main story and some comments above indicate ignorance of how many of the addictions started: misleading claims by the opioid makers that just 2 time-release pills a day were sufficient to quell pain caused by workplace injuries, accidents or medical procedures/issues. This led to users crushing pills and getting a momentary rush, to then taking larger doses than prescribed, abuse and descent. This New Yorker story has the usual suspects for NV’s POV, but it mainly makes you sad, revealing the utter folly of jewish philanthropy fed by a plague: https://www.newyorker.com/magazine/2017/10/30/the-family-that-built-an-empire-of-pain

Rural whites live in some of the most beautiful areas of the US; as the story says, ” The Appalachian and Ozark mountains, the Pacific Northwest, and rural New England, are virtually drawn by death statistics here.” The opioid crisis has caused about 200,000 deaths, says the New Yorker story referenced above, and it’s growing worse during a period of economic growth and very low unemployment among blue-collar whites. With the mostly-white death toll rising, I don’t buy Mr. Strom’s claim at all; rural whites are not abusing opioids to treat depression caused by negative jewish influence on media, legal system, etc.. Something more tangible is at fault, and NV needs a higher standard; this is a holocaust and it’s happening now. These beautiful areas are also places where the… Read more »

Look Carefully at This Picture: Jews Did This