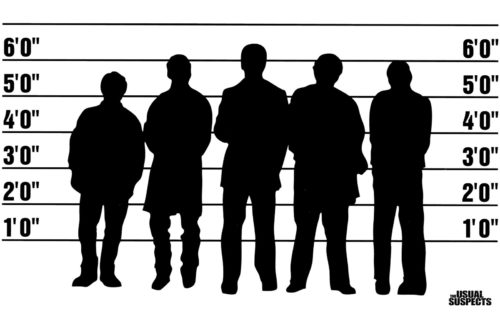 ONE OF THE most common euphemisms used to describe Jewish people is “The Usual Suspects” and the Jews themselves seem to know it and understand it as an “anti-Semitic trope”. The Usual Suspects is also a very well made 1995 crime thriller directed by gay Jew, Bryan Singer. The most famous character in The Usual Suspects is “Keyser Söze” whose identity is shrouded in mystery; Söze himself is seemingly omnipotent, a master manipulator and source of dread for all who cross his path.

This article is not so much a review of The Usual Suspects movie, which is excellent, but rather an investigation into whether there is any validity to the character of Keyser Söze being what we might call an ‘Anti-Semitic trope’.

The Usual Suspects has a notoriously intricate plot which can only be briefly outlined here. The movie opens at a harbour ablaze, a multitude of corpses are floating in the water and strewn all around the harbour and a docked ship. Five men, Verbal, Keaton, McManus, Fenster and Hockney, are rounded up and thrown onto an identity lineup. The chronology of the movie then switches back and forth as one of the men, Verbal Kint (Kevin Spacey), explains what happened after the lineup and the events which led to the bloodbath at the harbour, in which all of the other men were killed. Kint then explains that after the lineup the men were contacted by a representative of the feared and semi-mythical Keyser Söze. The men were then blackmailed and manipulated by Söze into killing the one man on earth who could identify him, or ‘name him’.

Kint, of course, is Söze, everything the audience has witnessed was Kint’s view of events. As plot twists go it’s simply brilliant. But what about the character, modus operandi, and motivation… is Keyser Söze an anti-Semitic canard?

The origin of the Jewish people is something which most ‘normies’ haven’t thought about very much: they’re in the Bible, they’ve always sort of just been there wandering from country to country. There’s lots of conspiracy theories about Jews, it’s all a bit vague, are they a race or a religion or what? There’s a connection to the Middle East and central Europe and, of course, Germany. But mainly most Europeans simply don’t know and even within circles which spend a great deal of energy researching the subject there’s debates on the “Khazar Hypothesis” etc.

Keyser Söze’s origins are similarly shrouded in mystery. Söze/Kint explains that “nobody is really sure where he came from.” His father is rumoured to have been from Germany. He began his criminal career in Turkey, it is said. Söze’s main enemies come from Hungary, not south or central America, as is the norm for a modern criminal mastermind operating in America.

One of the most frequent accusations directed toward the Jewish people is that they create a chaotic situation which they then manipulate so that the outcome benefits themselves. The Usual Suspects movie is a movie about manipulation, not just of the characters within the film, but of the audience too.

As Verbal Kint, Keyser Söze adopts a severe limp and fakes a crippled hand, as well as a generally hunched and cowed physical presence. Out of the 5 men he’s easily the least physically imposing and earns the nickname “The Gimp” from the others. By playing the victim Söze gains the sympathy of the other men and the audience. Gabriel Byrne plays ‘Keaton’ the most experienced, feared and respected of the other men. He’s also the most sympathetic toward Kint/Söze. It is through Keaton that Söze gains influence, an influence which is never questioned because of his status as a weak and feeble victim. The great reveal at the end of The Usual Suspects is Söze shedding the victim guise and walking upright.

Throughout the centuries the most frequent cause of tension between Jew and Gentile was the Jewish practice of usury, of trapping people with debt and interest upon that debt. Keyser Söze’s modus operandi is not primarily one of outright violence but of ensnaring people via a debt owed to him. Söze will offer a job to a criminal in which the criminal actually makes more money that Söze does. This tactic initially seems rather paradoxical, if not moronic, but the catch is that Söze will later return to collect on the debt and the criminal will be forced into performing some sort of suicide mission or vastly more dangerous task. Violence and death will follow if the criminal refuses, presumably carried out by another criminal enslaved to Söze.

As The Usual Suspects unfolds it is revealed that all of the men have at some point stolen from Söze or been involved with a scam, albeit unknowingly, which originated from Söze. They all, then, owe Söze, they are all in debt to him.

An accusation often hurled at politicians is one of being a “Shabbos goy.” This rather demeaning term is used to describe gentiles who carry out tasks and work deemed unfit for, or below Jews. Tony Blair is often cited as a prime example of a shabbos goy. In The Usual Suspects Keyser Söze has the equivalent of a shabbos goy in the character of “Kobayashi”. It is through Kobayashi that the men learn of their involvement and enslavement to Keyser Söze. Kobayashi appears to be Indian (Asian) and we are told he’s a lawyer. He operates within legal and political circles on behalf of Söze. Söze’s shabbos goy has the potential to destroy Söze as he’s the only person who truly knows the character and nature of Söze and his operation. However, like Tony Blair, Kobayashi is awestruck by his master and his allegiance to his master seems to be unshakable.

The plot of The Usual Suspects hinges on Söze being identified by one of his old Hungarian rivals. It is Söze’s dire need to eliminate this threat which drives the whole story. Because of the secretive and manipulative nature of Söze’s power, having a genuine name and face pinned on him, for him to become an identifiable man, a villain at that, would be catastrophic. Unlike a Colombian drug cartel, Söze does not have a large territory with hundreds of armed men, his power is one of secrecy, manipulation and shadowy control. Thus, if he, as a living breathing human being, is pinned to his crimes and exposed, the threat to him becomes exponential. Keaton, McManus, Fenster and Hockney are therefore acting more like a machine-gun-armed Anti-Defamation League or European Jewish Congress when charged with the task of preventing Söze from being exposed, albeit unwittingly.

People often point out that Jewish people are highly adept at using language. Some scientific research has even revealed that the parts of the Jewish brain relating to speech tend to be more developed than those parts are in other racial and ethnic groups. Whatever the truth of that, Jewish people are famously over-represented in the realms of politics and media and various other areas such as law, which require a person to talk a great deal and at length. It’s rather interesting, then, that Söze adopts the name of ‘Verbal’. The audience is told via Söze/Verbal, that the name was given to him in an ironic sense, because he’s rather quiet. But it isn’t really true that Verbal is reticent about talking, far from it…. 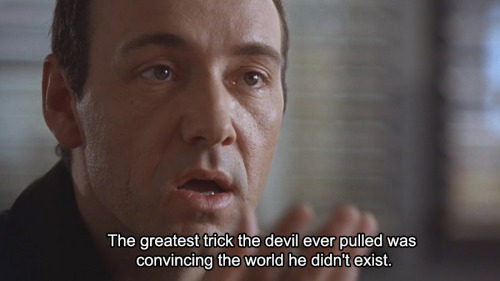 The great twist at the end of The Usual Suspects not only reveals that Verbal Kint is Söze, but also that everything which Kint explained in the police station, everything which we as the audience thought of as ‘reality’ within the context of the film, was a lie, or if not a lie then it was certainly subject to what Söze wanted us to know. In a sense Keyser Söze was acting as our media, he was relating events and we, as the audience, were trying to understand and comprehend those events based upon what he was telling us. Söze is the only person left alive, so he has a monopoly on information regarding what happened.

It could be argued that because the western media is pretty much owned by Jewish people, that we are in a similar situation as the audience watching The Usual Suspects. When we watch a film or TV show or read a newspaper we are, in effect, listening to Keyser Söze spinning a yarn again, a yarn which serves the interests of the people who own the media.

At the finale of The Usual Suspects the audience is ‘Red-Pilled’ because they see the fraud, it’s given to them and there’s an element of shock, betrayal and confusion. The most famous line in The Usual Suspects is “The greatest trick the devil ever pulled was convincing the world he didn’t exist”.

But how would the devil react to people who weren’t convinced, people who saw him clearly and called him out on his evil? Would those people not be castigated as the most evil people of all time?.

I have no idea if any of this was intentional, but on a recent re-watch of The Usual Suspects from a ‘Red-Pilled’ perspective, it does sort of jump out at you…..

This article motivates me to watch “The Usual Suspects.”

I don’t know the final answer but denial is also the devi’s tool, evil’s tool, too, and it often works. You can talk people out of their perceptions and convince them they didn’t see what they claimed to see. (The televised 9/11 event is one excellent example.)

I think the evidence for these assertions can be found in Herve Hyssen’s “The Jewish Mafia” recently translated by Carlos W. Porter (available through Amazon or The Barnes Review).