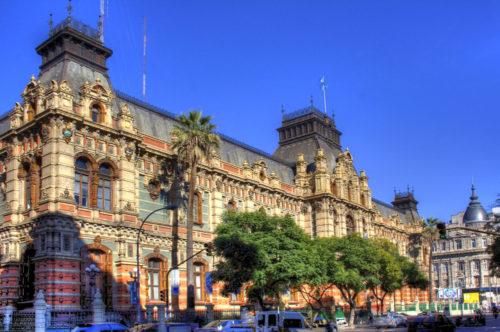 It may be difficult to remember now, in the aftermath of Angela Merkel and George Soros’ manufactured “Refugee” Crisis of 2015, but prior to the open borders mania that was thrust upon Europe that year, the Old World was suffering from a litany of other crises — the Greek crisis, the education crisis, the youth unemployment crisis, the Euro crisis, and so on. Brexit was a child originally conceived in this period, long before the Calais migrant jungle or visa-free travel from Turkey was an issue.

With all that madness in tow, one might be tempted to lament the death of European civilization. Ah, well, it was a good run to say the least. But did you know there was another Europe you could visit? Not America or Australia, settled by Anglophone British islanders, but another Europe settled by continentals, with classical European architecture, a temperate climate, and pale-skinned people speaking European languages that Americans learn in school with difficulty?

Welcome to the Southern Cone of South America.

This region, including Argentina, Uruguay, Chile, and the southernmost portion of Brazil, was overwhelmingly settled by European colonists and immigrants from the last few hundred years. Its estimated population is north of 130 million people, descended largely from Spain and Italy, followed by Germany and Eastern Europe. The official languages of Spanish and Portuguese are complemented by rural communities of Italian, German, and Croatian-speakers.

The main area around Buenos Aires and Montevideo has a humid subtropical climate according to the Köppen climate classification system, a climate shared with northern Italy, Croatia, Serbia, Montenegro, and the U.S. South. It’s true that DNA studies show notable Amerindian and African admixture among the Whites of the Southern Cone, but I’ll let you judge for yourself how impactful that is.

Discounting Chile, surveys indicate the region is between 80-95% White, depending on the precise area in question. That could make many parts of the Southern Cone tremendously whiter than London, Paris, Brussels, or Amsterdam. There are no Blacks and no Muslims.

U.S. State Department reports indicate that Argentina and Uruguay are hotspots for thieves, burglars, and pickpockets, but Mexico it ain’t. No terroristic drug cartels or criminal gangs usually associated with Central America. With regards to crime, the area sounds a lot more like Naples in southern Italy. None of the political executives in the region attended Harvard John F. Kennedy School of Government, although the President of Argentina took business classes at Wharton and the President of Uruguay studied in Paris (his Vice President studied in Cuba). The local universities tend to be “pontifical” i.e. Roman Catholic.

The lack of Harvard Crimson among the elite of the Southern Cone is not an accident. Although the so-called “International Community,” under the aegis of the U.S. government, has been making inroads into the local power, the area south of the Amazon rainforest was traditionally cut off from American influence. Northern and Western Europeans would migrate to and settle North America, while Southern and Central Europeans would migrate to and settle South America — south of the Amazon.

Geopolitically speaking, the region north of the Amazon rainforest and the Andes mountains is an American lake. Although the entire globe, save for a few exceptions, is now de facto an American lake, the Southern Cone avoided American encroachment as late as World War II thanks to its distance from Washington and isolation behind the world’s largest rainforest and one of its longest and tallest mountain ranges. It wasn’t until World War II that the dictatorial regimes of Argentina and Brazil cut off ties with the arch-contintental European Axis powers. The massive German and Italian diaspora in the Cone ensured that the countries stayed neutral and sympathetic for as long as possible — and then some.

The famous Juan Peron of Argentina studied at Turin in Benito Mussolini’s fascist Italy, although he was not a vocal supporter. The post-war Argentina-National Socialist connection is well-known too, primarily because of the fictional ODESSA organization that supposedly smuggled ex-SS officers and other high-level NSDAP figures into Brazil and Argentina. This organization wasn’t necessary, since there was nothing very furtive or secretive about the fascist connection to the Southern Cone. In 2015, the BBC noted wryly, in an article about a purported abandoned Argentine National Socialist hide-out, that “the researchers said that the buildings were probably never used by fugitive National Socialists, because they found they could live freely in Argentine towns.”

Is that so incredible? Not when Argentine towns were filled with Germans and Italians — and their descendants remain there today. Argentina, Uruguay, and southern Brazil are like smaller, imperfect replicas of Spain, Portugal, and Italy.

High-profile National Socialists like Erich Priebke, Josef Mengele, and Adolf Eichmann escaped to Argentina in the aftermath of World War II, and in the case of Priebke managed to live there openly for more than 50 years. Eichmann was kidnapped by Israeli Mossad agents in Buenos Aires in 1960 and later executed in Israel, after an initial protest by the Argentine government. Mengele was chased by the same Israeli intelligence agents to Argentina, Paraguay, and then Brazil (all in the Southern Cone) and died while swimming off the coast of Sao Paolo in southern Brazil.

Members of the Croatian war-era fascist Ustase also escaped to Argentina en masse, including their leader and former dictator of the Croatian fascist puppet state Ante Pavelic. Pavelic not only found lucrative employment in Argentina thanks to his connections to Juan Peron, but found enough time to become openly active in far-right politics again and found the right-wing Croatian Liberation Movement that exists to this day.

The Southern Cone of South America was friendly to fascism much like Continental Europe was.

Although South America is no paradise today, it may be worth remembering for Europeans in Europe and abroad with rightist leanings. History does not repeat itself, but it does rhyme, and just like the constitutional court of Austria is allowing the Austrian far-right to take power in 2016 as it did in 1934, there may soon be a time for Europeans to escape hatchet-wielding Muslims, and settle — or re-settle — the open ranchlands of the Southern Cone of South America.

That doesn’t look likely if you analyze the situation using nominal kabuki-theater-politics labels, but the historical and geopolitical ties between continental Europe and its daughter colonies in South America are very strong. Geopolitics has a way of reasserting itself suddenly in spite of labels, and, as the Cathedral’s power wanes, the white Southern Cone is only going to fall farther and farther out of USG’s grip behind the Amazon and the Andes.

Leftist Ideological Censorship vs. The Telling of Inconvenient Truths

The Forest and the 'Faustian' Soul