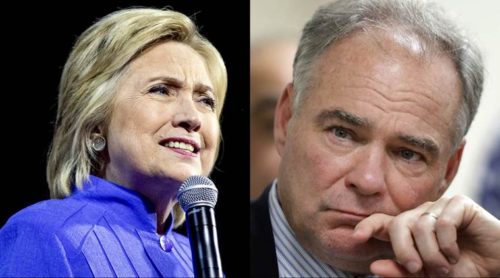 TIM KAINE is the perfect running mate for Hillary — just as sick and evil as she is. Two peas in a pod.

In a Freudian slip, the Democratic vice-presidential nominee appeared to inadvertently admit Thursday that Democratic policies are inherently harmful to White Americans.

While speaking to a group of Black Baptists in New Orleans, Tim Kaine seemed to suggest that in order to achieve “equity” between the races, White people need to willingly submit themselves to a state of repression similar to what Black Americans have experienced.

White children in some of the nation’s most elite schools are literally being taught to be ashamed of themselves because of the color of their skin.

“I’ve never been treated badly in life because of my skin color or my gender,” Kaine said. “I think the burden is on those of us who are in the majority — Caucasians. We have to put ourselves in a place where we are the minority.”

Tim Kaine didn’t slip up. The near total soft (((tyranny))) that rules America is now bold enough to admit what we already knew. The goal is to reduce the White race to an oppressed minority. It’s Tim’s version of social justice.

Sen. Kaine is certainly in the right party, as turning White Americans into a minority — and a minority against which other races are able to direct hate with impunity — is the inevitable result of the policies promoted by the Democratic Party and the Left at large.

Indeed, despite what Democrats tell the public, progressive policies do very little to raise Black people up from poverty and a lot to bring all Americans down to a level of government dependency and economic immobility.

The only thing restraining mass anti-White violence is the number of White people and the fact that so many are locked and loaded now.

As the White race becomes an ever smaller minority and the country sinks to “thurd” world status, the anger and hostility will lead to where it always leads: Ethnic cleansing and genocide.

You can also count on the Hillary-Kaine team to engage in mass confiscation of guns, turning the White race into an UNARMED minority.

If it comes down to a race war in the future, the soldiers fighting for the White race will be well advised to target the generals who think themselves safe from the consequences of their treason to the Founding Fathers’ vision of America.

On this article: Race traitors get the noose [after a fair trial]. No jury.