TODAY THE Nordic Council of Resistance organization was launched in Iceland in order to further advance the resistance effort in the Nordic region. The Nordurvigi (North Front) Web page is currently a static page with information about Norræna mótstöðuhreyfingin (Nordic Council of Resistance), but the goal is to soon convert it into an interactive news and activism portal that will be updated continuously.

On the sidebar there is also an explanation of why the Nordic Resistance Movement needed to establish themselves in Iceland, and two specifically-designed Iceland-centric fliers ready for printing and distribution.

The new Icelandic leaflets — which just became available last Wednesday — have now begun to be distributed in Reykjavik. The leaflets were handed out on Saturday and have already been mentioned in news reports on television and on a “mainstream” Icelandic news Web site.

The news site described the campaign in an article entitled “Neo-Nazis want to establish themselves in Iceland.” The article gives the views of Eiríkur Bergmann, said to be a professor of political science, of the Nordic Resistance and our organization’s ability to establish itself in Iceland. 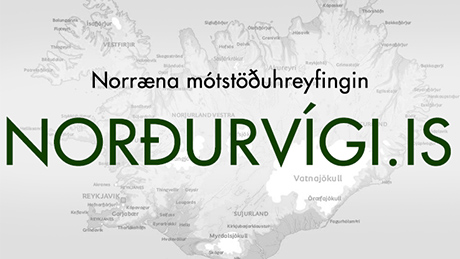 Bergmann’s opinions and description of the Resistance are, on the whole, what today might be expected from hostile, anti-White media in a Nordic country.

Icelanders, or persons of Icelandic descent or language comprehension living outside Iceland, are now prompted to contact Nordurvigi.is and offer help and join the nascent fight for our people in Iceland. Spread the word!

First Viking Temple in 1,000 Years Coming to Iceland
The Petition that Isn't Allowed on Change.org: Expel Jews from America
Save the Quad Cities -- Save America -- and Love Your Race
Individualism and Collectivism
Who's a White Supremacist?
Our Heritage, Our Freedom, and Our Future, Part 1
Now Enough White Nationalists in America to Fill Australia
Italy: Nordic Resistance Movement and German Comrades Join CasaPound Demonstration
Tags:IcelandNordic Resistance MovementWhite activismWhite NationalismWhite Resistance

Notes From a Graveyard

“Neo-Nazis want to establish themselves in Iceland.” Yep! They sure do. They want Iceland to be under the iron rule of Icelandic Icelanders.