HAVE YOU NOTICED that we don’t hear much about Ukraine these days? Here in the West, the word on the streets is “one never hears of Ukraine now.” In the run-up to the Washington-instigated coup of February 2014, mainstream media were rolling story after story on that country, almost non-stop. Then conventionally-elected Ukrainian President Viktor Yanukovych was ousted — and it was “mission accomplished.” (ILLUSTRATION: The oligarchs’ choice, Ukraine President Pyotr Poroshenko)

Controlled media editors and journalists slapped their hands and congratulated themselves. The coup had delivered Ukraine’s natural and industrial wealth to the corporations of the West.

The primary aim of America’s “regime change” coup had been to bring about a Russian-Ukrainian divorce. Russian President Vladimir Putin’s restoration of Russian wealth to Russian control had not been forgiven — and will never be forgiven. The West’s ousting of Yanukovych was payback time.

Sadly, Europe’s second-largest country, Ukraine, is now where President Yeltsin’s Russia was in 1999. Ukraine’s natural resources and industrial heartlands are plundered. Ukraine today is crime-ridden and divided into oligarchic fiefdoms. Ukraine today is reeling from 46% inflation. Ukrainians are starving and describe what is happening as yet another Holodomor (artificial famine).

The minimum Ukraine wage is 1550 hryvnia ($62) per month. The normal salary for a factory worker is 2000 hryvnia ($80) of which about $60 is tax deductible. Protesters are routinely arrested and gaoled. The average pension is $55 per month.

The Global Peace Index 2016 Institute for Economics and Peace Report ranked Ukraine under US/EU tutelage is now one of the ten most dangerous nations in the world; Syria is marginally ahead.

As I write, Ukraine is a country in which conscription applies to all men aged 18 years and over. Mobilisation in August 2015 resulted in 50% of those called up refusing to do so. Over 400 prison sentences have so far been handed out for draft avoidance. Many men receiving their call-up papers join the Jehovah’s Witnesses as being the better option than prison or conscription. As many as 16,000 personnel from the Ukrainian Armed Forces, many of them armed, are believed to have deserted the conflict zone in Kiev’s so-called “anti-terrorist operation” in eastern Ukraine. Ukraine is today a vast concentration camp where no one of conscript age can receive a visa to leave the country.

Because so few Ukrainians can afford health care, thousands of young and old die needlessly. An estimated 1.5 million Ukrainians have so far sought sanctuary in Russia.

(Interestingly, after his resignation as Prime Minister of Ukraine, Arseniy Yatsenyuk disappeared for a time, and some speculated he had gone into a self-imposed exile for his own safety. For several weeks in April, no one knew the whereabouts of this Jew oligarch who had built a 2,000 km fence to prevent Ukrainians from fleeing to Russia.)

You might recall the controlled media in spring 2014 gleefully showing images of ousted President Yanukovych’s palatial home being wrecked by US-paid insurgents. What those media overlooked explaining is that the residence was state-owned — as are the White House and 10 Downing Street. It was not, as they claimed, the private home of Yanukovych. The oligarchs’ chosen replacement president is worth an estimated — wait for it — €700 million. But we won’t talk about that, will we?

The oligarch’s president (who is himself an oligarch), Pyotr Poroshenko, enjoys only 10% electoral support. This makes him possibly Europe’s most unpopular head of state. A recent Gallup poll revealed that 81 per cent of Ukrainians don’t think that the government is doing enough to fight corruption. In a survey of corruption, Transparency International ranked Ukraine as 142nd out of 175 investigated countries. 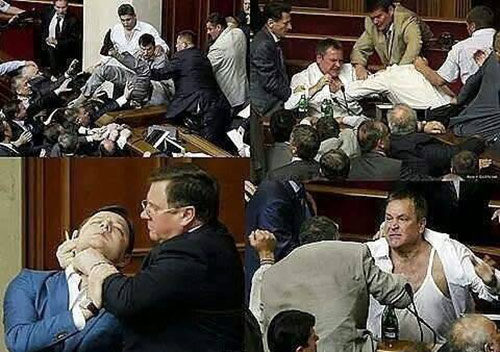 Unlikely to receive further credit from the IMF, President Poroshenko senses civil unrest — or worse — ahead. He has asked the Ukrainian Rada (parliament) to greenlight his proposals to install martial law. Another fear is that if Ukraine collapses, the flood of refugees would be unstoppable. Ukraine’s population is 44 million; Syria’s population is 22 million.

Odd, isn’t it, that “one never hears of Ukraine now”?

With Jews, you lose. Ukraine is the perfect example.