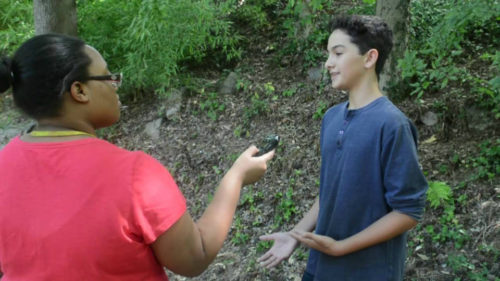 NOW I REALIZE that it’s quite possible to find 14-year old White boys who, having endured a standard American education, would deplore their White privilege — that they are an “ethnomasochists” as John Derbyshire would have it. But it also seems to me that it’s more likely that such sentiments would come from a Jewish boy raised in the home of left-wing Jewish activists.

I am not sure that Royce Mann, the 14-year-old performance prodigy who won a poetry competition for deploring his “White privilege,” is Jewish (update: actually, I’m quite certain now; see Addendum below), but I’ll bet money on it. All the stereotypes are there. Common Jewish last name, mother a leftist activist who works in Hollywood as an actress, dad named Barry Mann who “speaks bits” of Hebrew and has visited Jerusalem.

Dad is also a social justice warrior dedicated to “common humanity,” a theme that I rather doubt he picked up during his stay in Jerusalem, where borders and group boundaries are taken quite seriously, but a very common pose among diaspora Jews in the West.

He instills in his work a sense of the common humanity that transcends cultures and borders, and the responsibility that we all share to work toward social justice through the exchange of ideas, stories, and experiences.

The Mann’s other son, Tendal, has been cast as Jewish in several films. He was honored for his acting at the Atlanta Jewish Film Festival and the Los Angeles Jewish Film Festival in Who Do You Love, about Jewish brothers in the music business, directed by Jerry Zaks. Tendal also had a role as “Holocaust boy” in Auschwitz Block 10 in the Spielberg Shorts Competition, directed by Jason Dannenberg.

Royce acknowledges that he is privileged, and, as a student at Paideia School in Atlanta (tuition $~23,000), he certainly is. Perhaps he would honor us with a poem on Jewish privilege.

Addendum: A commenter, Henry, points out that Paideia School celebrates Yom Kippur and Rosh Hashanah, but no Christian holidays. Looks like case closed.

14 Reasons Amerindians Are Not the First Natives of the Americas

Paideia is also the similarly named Jewish Supremacist institute (((Barbera Lerner Spectre))) formed in Sweden. Spectre said Jews will be at the center of multiculturalizing Europe. According to the Jewish dominated Wikipedia:

Barbara Lerner Spectre (born 1942) is an academic[1] and philosophy lecturer, who is the founding director of Paideia,[2] the European Institute for Jewish Studies in Sweden, a non-denominational academic institute established in 2001.