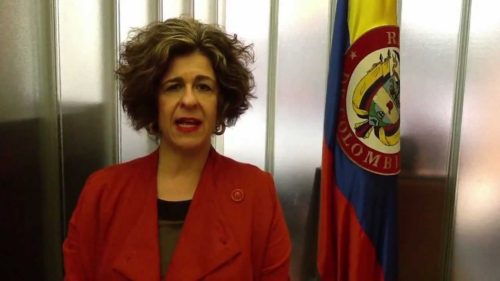 As Whites become more and more aware of their predicament, Jews “network” with other non-Whites to keep dispossession of Whites “on track”

… U.S. RESIDENTS of Mexican descent, feeling besieged by Trump’s attacks on their culture and ancestral homeland, are ramping up ties to American Jewish networks and emulating Jewish models of political activism, including the American Israel Public Affairs Committee. And many Jewish activists are eager to help. (ILLUSTRATION: Dina Siegel Vann, who “builds coalitions” with Latinos for the American Jewish Committee)

Trump on Saturday was widely criticized for tweeting an image of Hillary Clinton next to a pile of cash and a Star of David shape emblazoned with the words “Most corrupt candidate ever.”

The growing bond comes as Mexico’s government pursues a public relations campaign designed to update the image of Mexicans and convince Americans that Mexico is more than just a country that happens to share a border with the U.S.

“The same way that Israel is a very strategic partner of the United States, Mexico is, too — that is what we are emphasizing,” Mexico’s newly appointed ambassador to the United States, Carlos Sada, told POLITICO. “Of course, there is a kind of wake up call when somebody attacks you.”

The American Jewish Committee, a major advocacy organization, has been a key partner in the Mexican diaspora’s surging interest in political activism.

The AJC houses the Arthur and Rochelle Belfer Institute for Latino and Latin American Affairs, which builds political alliances between Latinos and Jews. Although it has been around for more than a decade, the 2016 presidential campaign — in which Trump has called undocumented Mexican immigrants “rapists,” promised to build a massive border wall, and questioned the loyalties of a Mexican-American judge — has intensified interest in the institute’s work.

Dina Siegel Vann, the institute’s director, said the Jewish community, although smaller in number than the Mexican-American community, offered a model that, among other things, emphasizes the importance of coalition building. (There are roughly 6 million Jews in the U.S., and at least 33 million people of Mexican heritage. There also are 40,000 Jews in Mexico, and between 100,000 to 200,000 Latino Jews in the U.S., according to various studies.)

The institute hosts workshops to train Mexican Americans and other Latinos in political advocacy work — there’s one scheduled for July 10 in Washington, followed by a reception featuring Sada. The sessions, which train 35 to 40 people at a time, include discussions of case studies, such as how the push for comprehensive immigration reform fell apart, and tips for how to engage members of Congress — including when you have only two minutes on an elevator.

Mexico’s foreign secretary, Claudia Ruiz Massieu, delivered a keynote address at the AJC’s Global Forum last month. Without mentioning Trump by name, she slammed the “stench of bigotry” and “climate of intolerance” in the U.S.

“Those who want to make a political profit stigmatizing these people, be [they] Mexican, Jews, Muslims, people of color, Asians are wrong for this country was founded on the very principle, the self-evident truth that all men and women are endowed with the same unalienable rights: life, liberty and the pursuit of happiness,” she said.

Ruiz Massieu said that Mexico was ready to take its relationship with the AJC “to the next level.” As evidence, she pointed to the fact that also attending the forum were the leaders of all of Mexico’s 50 consulates in the United States as well as dozens of Mexican-American leaders eager to network with the Jewish group. The Mexican contingent attended seminars and other gatherings at the forum, including sessions on advocacy training. …

Dozens of Reports of Assaults, Rapes at Swedish Festivals

“….. that Mexicans are called rapists, there has to be some sort of national outrage.”

Yes, let there be national outrage as the truth of the statement is backed up with facts.

So go ahead, Jews and Mestizos, defend your rapists. Put your face and name to their acts as accomplices. We all want to know who you are.

Wouldn’t it be easier for all American Jews to simply move to Mexico, or the central and south Americas, and end their battle against whites here that can only end in their involuntary ouster, as history has shown time and again?

The many anti-American (financed by taxes) organizations demonstrate the war prosecuted against American sovereignty . An alien invader shamelessly appropriates the government to conceive the victims’ humiliation defeat. They defy all laws as well as description . The absolute interpretation of said constitution has been explained by a constitutional expert jew that the autochtonic people incorporated in thier laws a latent desire for self destruction. This alien agency , known as the Chosen lives to complete our demise — and boast we should be grateful to them. The Council for Anti-American activities has been relinquished . The self appointed jews , who improvised it declare it to be anti-American . Shalom.

For me, I look at Mexicans as Jews that happen to speak Spanish.