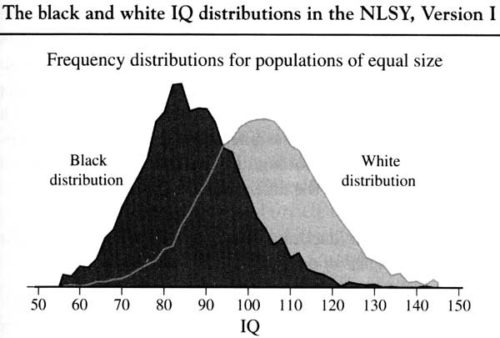 Reasons we know that the intelligence gap between Whites and Blacks is genetically based:

2. Genetic divergence of the races has accelerated since Whites/Blacks split over 60,000 years ago, and a majority of genes affect the brain. Whites evolved in Northern regions with greater cognitive demands to plan and prepare for harsh Winters.

3. Many specific gene alleles have been linked to higher intelligence, and in every case these alleles occur with greater frequency in Whites than Blacks.

4. White-Black academic and cultural disparities, including an IQ gap of 1SD or more, are consistent across geographic regions and technological eras. They persist throughout various cultures, and in spite of massive uplift programs benefiting Blacks and some devastating wars afflicting Whites.

5. When African Blacks took control of White-governed nations with advanced infrastructure, some of them rich in resources, the level of civilization collapsed.

6. Twin/adoption studies consistently show that core traits including intelligence are mostly genetic-based for both Whites and Blacks, and rule out cultural factors as possible causes of the IQ gap. Identical twins reared in random families have much closer IQs than fraternal twins reared in the same family. Genome-wide gene association studies reach the same conclusion.

7. The 1SD White/Black IQ gap is evident in the first tests of children at age 3, when cultural differences are minimal, and is consistent throughout the lifespan.

8. Intensive and extravagant education programs have mostly failed to raise Black IQ or academic achievement, having but minimal effect.

10. Black children of high-IQ parents have IQs midway between their parents’ and the lower black mean, in accordance with the hereditarian principle of regression toward the mean. White children regress toward the 1SD higher White mean, and so they have higher IQs than Blacks with parents of the same IQ. Children of lowest-income Whites score higher on SATs than children of highest-income Blacks.

12. The White/Black gap is largest on IQ subtests that are the most g-loaded and heritable. These items have the closest correlation with biological measures such as brain size, cortical thickness, rate of glucose metabolism, nerve conduction velocity, and reaction time.

13. Blacks do no better on intelligence tests that are non-cultural, such as Raven’s Progressive Matrices, Backward digit span, and Reaction time tests.

14. Blacks in White nations not only enjoy the benefits of White civilization, but are advantaged in many respects: pervasive anti-White discrimination in education and hiring, high taxes/insurance premiums paid by Whites for Black welfare/benefits, special education programs, and an entertainment media that extols Blacks and ridicules Whites. Blacks have much higher self-esteem than Whites.

1a- Race, Evolution, and Behavior.
http://psychology.uwo.ca/faculty/rushtonpdfs/Race_Evolution_Behavior.pdf

2b- Different level of population differentiation among human genes.
http://www.biomedcentral.com/1471-2148/11/16

3b- A review of intelligence GWAS hits: Their relationship to country IQ and the issue of spatial autocorrelation.
http://emilkirkegaard.dk/en/wp-content/uploads/PifferIntelligence2015.pdf

4a- Intelligence: A Unifying Construct for the Social Sciences.
https://lesacreduprintemps19.files.wordpress.com/2012/08/intelligence-a-unifying-construct-for-the-social-sciences-richard-lynn-and-tatu-vanhanen.pdf

5c- Black South Africans much worse off under ANC-rule now than under apartheid.
http://www.spainvia.com/leftwingdisaster.htm

6a- Meta-analysis of the heritability of human traits based on fifty years of twin studies.
http://www.nature.com/ng/journal/v47/n7/full/ng.3285.html

6b- The Heritability of IQ.
http://thealternativehypothesis.org/index.php/2016/04/15/the-heritability-of-iq/

7– The Onset and Development of B-W Ability Differences: Early Infancy to Age 3.
http://humanvarieties.org/2013/05/26/the-onset-and-development-of-b-w-ability-differences-early-infancy-to-age-3-part-1/

8a- The shaky science behind Obama’s universal pre-K.
https://www.aei.org/publication/the-shaky-science-behind-obamas-universal-pre-k/

8c- Expectations of sustained effects from scaled up pre-K: Challenges from the Tennessee study.
http://www.brookings.edu/research/papers/2015/10/08-expectations-of-sustained-effects-from-scaled-up-prek-challenges-tennessee-study-farran-lipsey

12c- Spearman’s Hypothesis and Racial Differences on the DAS-II.
http://humanvarieties.org/2013/12/08/spearmans-hypothesis-and-racial-differences-on-the-das-ii/

14a- The Elusive X-Factor, or Why Jonathan Kaplan Is Wrong about Race and IQ.
http://humanvarieties.org/2014/08/25/the-elusive-x-factor-or-why-jonathan-kaplan-is-wrong-about-race-and-iq/

14c- The Cost of Welfare Use By Immigrant and Native Households; Race and Ethnicity.
http://cis.org/Cost-Welfare-Immigrant-Native-Households

14d- All Those White People on Food Stamps.
http://therightstuff.biz/2015/09/13/all-those-white-people-on-food-stamps/

14e- Affirmative Action and the Costs of Diversity.
http://www.npiamerica.org/research/category/affirmative-action-and-the-costs-of-diversity

14i- Affirmative Action Thrives at Most Selective Colleges.
http://www.rollcall.com/news/affirmative_action_thrives_at_most_selective_colleges-240861-1.html

Is There Any Reason for Trying to Help Haiti?
Congoid Space Fantasies
Aid to Haiti: A Sinful Waste of Resources and Wealth
They Called It "Fascist Pseudoscience"
What Is Racism?
The Triumph of Beauty
Thinking about a White Future
Africans are Different: What I Learned in the Peace Corps
Tags:Black intelligenceGeneticsIntelligenceIQRacial differences

The Truth About Slavery 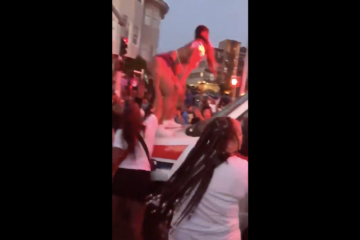 They make some good music though.

I gotta say…. I have read and listened to so many vehement arguments against the link between race/intelligence, but save white supremacist websites, no modern day arguments connecting race and intelligence. That speaks volumes… What are all these people arguing against? 1930’s eugenics? They’re like the person in the room who tells everybody who’ll listen how they are NOT materialistic (or some other trait) when nobody suggested that they are materialistic in the first place…. It begs the question, why are they trying to convince people to reject an ideology that’s not even voiced in mainstream society? Is it because these beliefs about race and intelligence are often the result, not of teaching, but of personal experience? Hmmm…. They’re trying to repeat to me, each other and themselves that any… Read more »

The problem with these statistics is that the majority of blacks are at least 50% white, skewing the results. They count as blacks in the stats but if only pure blacks were used the IQ range would be lower.

African americans at most have 13-16 percent dna from Europeans any sources to back up your claims?

The more taboo aspect is to say certain races have certain personalities or archetypes…..