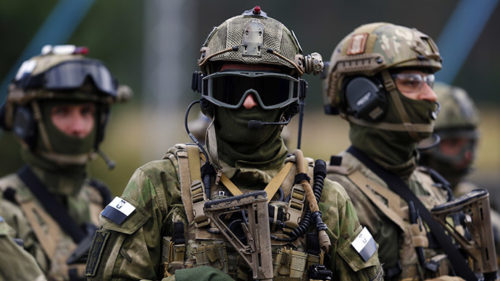 Weeks before a critical NATO summit in Warsaw, three of NATO’s biggest military powers said they would each command a battalion across the eastern flank to help “deter any show of force” by Russia “such as that deployed by Moscow in Crimea in 2014.”

“Britain will lead one of the battalions,” British Defense Secretary Michael Fallon said at a meeting of NATO defense ministers. “That should send a very strong signal of our determination to defend the Baltic states and Poland in the face of continued Russian aggression,” he said. Observers were perplexed by Fallon’s rhetoric, saying that no one has alleged any Russian aggression against those states.

In a reminder of Russia’s efforts to bolster its military readiness, its armed forces started carrying out spot checks on its units, as well of weapon and equipment depots. Russian Defense Minister Sergei Shoigu said the goal of the June 14-22 drill was to ensure the ability of his military to “carry out planned activities, including mobilization.”

NATO’s battalions are part of a wider “deterrent” — widely viewed by Russians as preparation for aggression — to be approved at the Warsaw summit on July 8. It will involve troops on rotation, warehoused equipment and a highly mobile force backed by NATO’s 40,000-strong “rapid reaction unit.”

Berlin and Washington also said that they would send troops to the new force, along with France.

Germany is likely to deploy to Lithuania, the United States to Poland and Britain to Estonia, on a six- to nine-month rotating basis. Other NATO nations will eventually take command responsibilities, diplomats told Reuters. Western officials also acknowledged discussions in Canada to lead a fourth battalion, with a British official saying a decision could come as early as Wednesday.

With a warning last week from a senior US commander that the alliance would have only 72 hours notice of a missile or ground attack, Baltic nations and Poland want a sophisticated anti-missile shield to deter Russia from gaining the upper hand. NATO Secretary-General Jens Stoltenberg said NATO was also considering a Romanian offer to command a multinational brigade which could coordinate alliance training and possibly play a deterrent role.

Russia sees NATO’s deterrence plans as hostile. Moscow’s envoy to the alliance has warned they threaten peace in central Europe. The Kremlin also says a U.S. ballistic missile shield, which Washington says is directed at protecting the alliance from Iran, is also escalating tensions.

Some observers believe the real reason for the NATO/US buildup is because Russia is challenging US/Zionist political and financial hegemony on multiple fronts.

"Gay" Omar Mateen and the Cult of White Hate