Most media accounts make no mention of his non-White ancestry

EDITOR’S NOTE: Even “conservative” news outlets make no mention of Sarkar’s race, instead obsessing over whether he was Muslim or not. America and Europe are being flooded with brown, unassimilable aliens of low genetic quality who are outbreeding us, racially defiling us, and destroying our nations. Religion has very little to do with it.

THE SUSPECT in the shooting of a UCLA professor has been named as PhD candidate Mainak Sarkar (pictured). The victim was Professor William Klug. He was a teacher in Mechanical and Aerospace Engineering, according to his official bio on the school’s website.

Sarkar was first named in a report by CBS News. He was a native of Minneapolis and had a PhD in solid mechanics from UCLA. 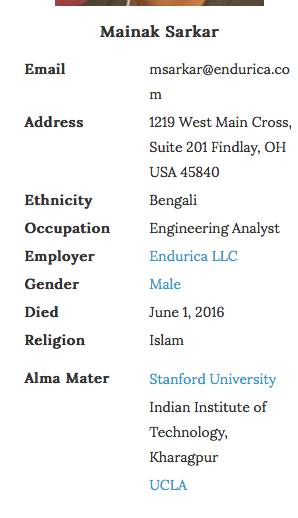 The shooting prompted a two-hour lockdown at the school with LAPD Charlie Beck telling the media when it was over, “The campus is entirely contained. We believe there are no suspects outstanding and no continuing threat to UCLA’s campus.” William Scott Klug was 39 years old.

A note was also allegedly found from the killer. The note said to take care of his cat at his house in Minnesota, it was there they found the ‘kill list’, and then found the dead woman because she was on the kill list.

The former UCLA doctoral student who killed a professor in an apparent murder-suicide had a “kill list” that included the name of a woman found dead in Minnesota, as well as that of another UCLA instructor, the Los Angeles police chief said.

Chief Charlie Beck told the KTLA television station that a victim was found shot to death in Minnesota after authorities found information in notes left by Mainak Sarkar that led them to her.

“That person was shot,” Beck said. “The connection is very strong. We still have to do the various ballistic tests … but it’s very strong.”

Beck said police believe Sarkar, a 2013 Ph.D. graduate of UCLA’s engineering school who most recently lived in Minnesota, packed two handguns, multiple rounds of ammunition, and several magazines in a backpack and drove from his house to Los Angeles.

He then went to the UCLA campus, marched into the fourth floor office of his former professor William Klug, and fired multiple rounds at Klug before killing himself, Beck said.

They have not named the woman found dead yet, but Everipedia notes he had broken up with his wife who lived in Minnesota.

Everipedia listing has now changed Sarkar’s religion to Hindu. We got the screenshot noting Muslim before most had found the site, immediately after the name was announced. We will try to clarify that point.

France: We Are the Anti-Scum Generation!
Australian Senator on South Africa: "This Is the Start of a Genocide"
Her Name is Carlie Beaudin: White Female Nurse (Found Trapped Under a Car and Frozen to Ground) Murd...
Run, Sheep, Run
ABC News Has Yet to Release Full Suicide Note of Vester Lee Flanagan
Let's Make Some Exceptions to Religious Tolerance
Her Name is Emily Jones: 7-Year-Old Girl Stabbed to Death by Somali Invader
The Lesson of South Africa
Tags:Murdernon-White CrimeUCLA shootingViolence

This story can rightfully be posted under mud shark madness. We can’t stop the invasion today but we certainly have a choice in who we become romantically linked to.

He was not a native of Minneapolis. He was a native of India. He left India and came to the U.S. This is another immigrant murder.