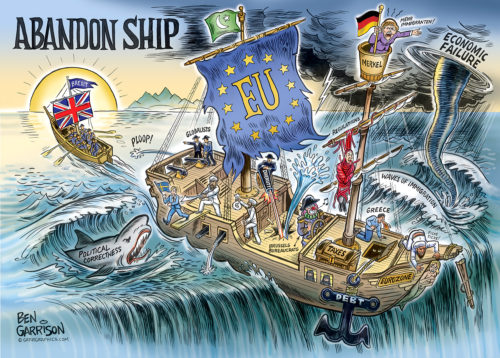 THIS CURRENT YEAR has already been the best the Current Year I can remember and we’ve got many months to go. 2016 will be remembered by history as the beginning of a return to sanity, borders, race realism, self-determination and nationalism. We are on the right side of history. The Jewish “diversity” mythology is collapsing like the house of cards it always was and Whites are waking up and fighting back. Like so many times in our history, when faced with an insurmountable challenge, when beaten down and left for dead by our enemies, we’ve come back with new-found strength and resolve, sweeping aside the inferiors and reclaiming our birthright. In the U.S.S.A. common sense is back after an eight year trip down the cultural Marxist rabbit hole. In the United Kaliphate it’s time to start calling it the United Kingdom again. The ordinary “racist” British citizen has turned off the negro ball and rejected the false song of globalism.

Our enemies are afraid and this is good. Now we have the pleasure of watching them panic as the tide of history sweeps them aside.

Thousands of people are signing a petition calling for Sadiq Khan to declare London as an independent city state and join the EU.

LOL. How desperate can they get? Visit Europe’s newest country, the Kaliphate of Londonistan. Come for the sharia, stay for the Jewish manipulation of muh economy. We are a proud member of the European Economic Community.

The capital overwhelmingly voted to remain in the EU during yesterday’s referendum, bucking a national trend which saw the Leave campaign secure victory.

This is why urbanization, materialism and personal atomization is a powerful Jewish evil that must be resisted. We must restore the White family and the White community if we’re going to survive.

And this morning a petition calling for London to be declared independent from the UK was backed by more than 8,000 people in a few hours — and the total is rising rapidly.

Wow, what a statement. A few thousand Jews, moose-limbs, and deluded useful idiots in a city of millions. It’s 2016, Jew. Get with the times.

James O’Malley, who set up the petition, wrote: “London is an international city, and we want to remain at the heart of Europe.

“Let’s face it – the rest of the country disagrees. So rather than passive aggressively vote against each other at every election, let’s make the divorce official and move in with our friends on the continent.

“Mayor Sadiq, wouldn’t you prefer to be President Sadiq? Make it happen!”

Shouldn’t it be Sultan Sadiq?

And John Godfrey suggested: “We’ll keep a permeable border of course and anyone with hope in their hearts who wants to join the party is welcomed with open arms.”

Well, of course. It’s just basic logic that you’d want an open border for all the world’s brown sewage to flood across. Fortunately the majority of the goyim still disagree, even after endless propaganda campaigns and kosher Thought Crime laws. Our enemies took their best shot and failed. We’re going to win.

According to what I read, it looks like it is the European (mainly Polish) immigrants what bothers English people. I have seen reports of incidents geared towards Polish people but no complaints about Indians, Pakistanians, Caribbeans,… anybody can clarify this?

The aim of the media is to guide people. They do that by giving an impression, sold as reality. They pretend to show what everyone is thinking, so the individual will take over that thinking, as most people don’t want to stand out. The stories shown in the news don’t have to be untrue, but they are certainly selective. Because of the selectiveness, you get a certain slant. As the owners of the media don’t like the referendum outcome, Leave people are pictured as nasty people. Hence the story about a ‘go home’ letter to a Polish family. Sad, if true. In a population of 65mio, it might be possible this is a true incident, just as many other incidents not reported by the media. If true, I wouldn’t be… Read more »