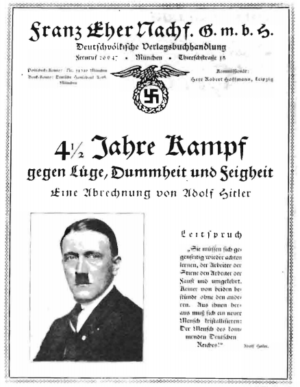 I HAVE SOMETIMES had the curious feeling — no doubt unwarranted — that I am the only man in the world who has actually read the various books in which people believe: the Bible, the Koran, Das Kapital, Mein Kampf.

Few Christians read the Bible now, as is evidenced by the sheer inability of ministers of religion to argue from the text. The best that can be expected from them are a few quotations selected with the help of a concordance.

It is true that Muslims are familiar with the beginning of the Koran, which they hear five times daily, played on records over loudspeakers from the minarets; but a glazed look comes into their eyes if any reference is made to later parts of that work. Little wonder that the termites are already active in the woodwork of Islam.

Marxists hardly read Marx at all. I have sometimes tried referring to, say, Chapter 8 of Das Kapital, only to see a look of bewildered resentment in the eyes of my interlocuters. You can see that they think this isn’t fair. Nowadays, politics, like religion, is something which is meant to be felt instinctively, not discussed rationally. (ILLUSTRATION: As the publisher announcement indicates, the original title for Hitler’s book was long and clumsy, 4 1/2 Years of Struggle Against Lies, Stupidity and Cowardice. Later this was reduced to Mein Kampf.)

During the National Socialist period, copies of Mein Kampf were given to every newly married couple, and before the war it was frequently quoted and excerpted. During the war, the quotations and excerpts became much more selective, because so much of that work expresses Hitler’s admiration of the English. Since the war, very few people seem to have read far enough into Mein Kampf to nail the biggest lie of all.

Every schoolchild is supposed to know that Hitler was a wicked man who succeeded in gaining power only because he told lies. In fact, he is said to have advocated telling as big a lie as possible, because that was the best way to be believed. By implication, therefore, it follows that he himself did not believe in the racialist policies which he promoted. They were just his chosen path to power. No one ought to doubt this because his advocacy of the Big Lie is so often referred to by the media.

The only trouble with the Big Lie story is that it is in itself a big lie. Nowhere in Mein Kampf, or anywhere else for that matter, does Hitler advocate the adoption of this technique. What he does do is discuss propaganda at some length, because he was convinced that propaganda, including faked atrocity stories, contributed materially to the British war effort. What he fails to take into account, because he looked at things from a strictly German point of view, is the degree to which such propaganda deceived the English themselves, and weakened them against internal forces of disruption. Take, for instance, the Allied propaganda against Austrian and Prussian imperialism. When the war ended, and the British and French expanded their empires under cover of League of Nation mandates, they were seen to be acting inconsistently, and therefore hypocritically. Naturally, this feeling was reflected in England and France as well. The propaganda vulture has a way of coming home to roost.

Hitler was right of course in comparing propaganda to advertising. In both cases, a wholly objective attitude, hedged around with qualifications and concessions is bound to ineffective because the average IQ is only 100 (or maybe lower, by the standards of the first IQ tests), and simple people cannot be expected to comprehend issues in their totality. To that degree, Hitler was justified in describing the German passion for objectivity as a serious drawback on the propaganda front. On the other hand, the German passion for seeing subjects as a whole may have long-term advantages. It is no accident that many people with no German background are now willing to treat the German viewpoint with respect. The Anglo-Saxon is concerned above all with empirical action to solve specific problems, and may sometimes do so without regard to the long-term consequences of his solutions. In this respect, as in so many others, ‘Der Englander ist ein Wikinger’, while the German, paradoxically enough, is positively Roman in his attitudes. What else is thoroughness but a typically Roman virtue?

The passage to which our media manipulators are referring when they mention the Big Lie is one in which Hitler is speaking of ‘the bottomless mendacity of Jewry and its Marxist fighting organisation’ in blaming Ludendorff for losing the First World War. Not only that, but he says that the Jews operate on the principle that the success of a lie depends on its very enormity. True, he describes this principle as ‘very correct’, but he certainly does not give the impression that he either approves of this Jewish mendacity or admires it. On the contrary, the continuation of the passage, in which he gives the psychological reasons for the success of big lies, indicates clearly that he is describing an enemy technique with typical German objectivity:

At the bottom of their hearts the great masses of the people are more likely to be misled than to be consciously or deliberately bad, and in the primitive simplicity of their minds they are more easily victimized by a large than by a small lie, since they sometime tell petty lies themselves, but would be ashamed to tell too great a one. An untruth of that sort would never come into their heads, and they cannot believe possible so vast an impudence in infamous distortion on the part of others; even after being enlightened they will long continue to doubt and waver, and will still believe there must be some truth behind it somewhere. For this reason some part of even the boldest lie is sure to stick — a fact which all the great liars and liars’ societies in this world know only too well, and make base use of.

But those who have best known this truth about the possibility of using untruths and slander have always been the Jews. [from the English translation of the unexpurgated edition of Mein Kampf, Stackpole Sons, 1939, Telegraph Press, Pennsylvania.]

In two other parts of Mein Kampf Hitler returns to the subject of Jewish lying. In the former, he quotes Schopenhauer’s reference to the Jew as ‘the great master of lies’, and instances as the biggest lie of all the Jewish claim to be a religious community, not a race. In the latter case, he quotes Schopenhauer again, and adds that anyone who is not ‘attacked, lied about or defamed’ in the Jewish press cannot be regarded as a decent German or a real National Socialist.

A similar charge of lying has frequently been made against Joseph Goebbels; but while Goebbels undoubtedly emphasized those parts of the truth which were most favorable to the German cause, he can hardly be regarded as an habitual liar. In a recent issue of the British publication Books and Bookmen, Diana Mosley reviews a book in which Goebbels is referred to as a liar, and makes the telling comment that “it has not been thought necessary to supply examples of his mendacity.” But of course the liberal-Jewish smear technique depends for its effect on avoiding passages in context. Yet the same people are always ready to squeal that charges against them have been “Taken out of context.”

Germany: An Economy for the People -- Instead of for the Parasites
Communism is Neo-Christianity
Gods on Earth
Parasites and Creators
Remembering 1940s America: Patriots Put on Trial, Declared "Insane"
My Friend, The Waffen SS Soldier, part 1
Congoids and Engineering
Japan: Schools Now Allowed to Use Mein Kampf as Teaching Material
Tags:Adolf HitlerInstaurationIQMarxismPropaganda

The Theft of Our Freedom

Every time I’ve tried to explain this one to people, it’s so frustratingly convoluted I could scream. Good job!

I remember those times you’ve tried to explain it. But never wanted to understand or listen I guess. Well… Later.