“I Feel Betrayed by My Country”: The Swedes Who Think Their Scandinavian Utopia is Being Ruined by “Refugees” 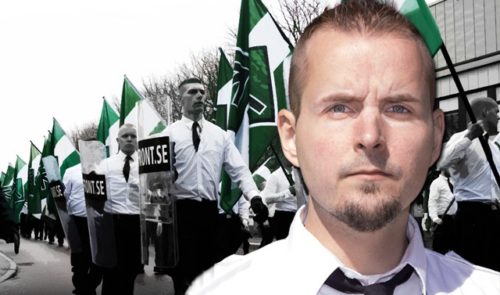 PROGRESSIVE, happy Sweden has long been a haven for refugees, accepting Jews, Eastern Europeans and Bosnians from Europe’s 20th century conflicts and hundreds of thousands more people from the current migrant crisis. Last year, while other EU states debated sending Syrians back to Turkey, Sweden single-handedly took in over 160,000 people. But not all Swedes are happy with their reputation as a humanitarian superpower. (ILLUSTRATION: Simon Lindberg, leader of the Nordic Resistance Movement)

An angry minority of far-right Swedes have lashed out against the government’s open-door policy. At least 64 active or planned refugee centers and housing facilities (map) were set on fire from June 2015 to April 2016, according to The Local Sweden, which combined police data with reports from newspaper Svenska Dagbladet. In some cases, buildings were set ablaze just one day after authorities announced they would be used to house refugees.

To understand what’s going on with their usually peaceful neighbors, Danish photographers Jonas Fogh and Sofia Busk spoke with members and supporters of Sweden’s anti-immigration groups, including the Swedish Democrats, Nordic Youth and Nordic Resistance Movement. Interviewed from June to Nov. 2015, these are the Swedes who would willingly destroy Sweden’s tolerant, utopian reputation:

“Sweden Will Stop Being Swedish.”

“In ten years, Sweden won’t exist anymore — not if the refugees keep coming. Then Sweden will stop being Swedish. The children will no longer be allowed to dress up as gingerbread men at the Lucia Parade because they are brown and people will find that racist,” says Kikki Toivola, 22.

“The refugees come to Sweden, and we accept them with open arms. We give them money, a roof over their heads, food and clothing. We give them all of what they don’t have. We arrange housing for them, and then they don’t want to live there — I don’t get it. They get everything served on a silver platter. I’m a single mother, and I don’t have as many resources as they do. They get paradise here, yet they aren’t thankful.”

“You Can’t Say Anything Without Being Called a Racist.”

“You can’t say anything without being called a racist,” says Robert Johansson, a woodsman living near Älmhult. “I’ve lost my pride in being Swedish. Instead it suddenly feels wrong.”

“Anyone Who Came Here After 1965 Should be Tested for Their Race.”

“The most important part for us is that you don’t mix races. The Nordic race is behind a lot of inventions and much of the culture that have been created. It would be dangerous for all mankind if our abilities disappeared,” says Simon Lindberg, the 32-year-old leader of Sweden’s Nordic Resistance Movement. “We want to have nature’s biological diversity, and ensure that there are different races in the world, but we believe that the Nordic race deserves to endure.”

“In Sweden, the politicians opened up for mass migration in 1965, and we believe that anyone who came here after 1965 should be tested for their race. If they don’t belong to the Nordic race or a closely related people, they should be sent home.”

Rasmus Johansson Huléen, 18: ‘There are quite a few refugees at my school, but I don’t talk to them.”

“Swedes are too Naive and Always Pity Others.”

“I help my own family first, and by extension, the nation and the people. Then I can start helping people from other parts of the world, but not right now: Right now I have to help my own people of Sweden. Swedes are too naive and always pity others, but you can’t help the entire world right now.”

Pieter Bevelander, director of the Malmö Institute for Studies of Migration, Diversity and Welfare in Sweden, notes that anti-immigration voices are nothing new. “In the early 1990s, with the Bosnian refugee groups, we had the same kind of reactions from extreme groups,” he says.

In Nov. 2015, Swedish prime minister Stefan Lövfan announced that new border controls and mandatory ID checks would be put in place. In March 2016, EU leaders decided to start returning migrants to Turkey, in exchange for approved Syrian refugees. The number of people seeking asylum in Sweden has since plunged from 39,196 in October 2015, to just over 2,100 in May 2016.

Top Berlin Rabbi: Keep EU, or We Will Be "Reverting Back to Nation States" and "There Will Soon Be Referendums Everywhere"

Sweden should always remain White, Nordic, peaceful, and free. The globalists of the United Nations are all anti White race bigots, who are using the Kalergi Program as the central theme of their “Agenda 21” to impose White genocide on Western Europe, Scandinavia, and North America, and destroy the White race. As a White American, I applaud the Nordic Resistance Movement, and ALL other White groups that are simply…and FINALLY…standing up for THEIR OWN people, just as ALL other racial groups do, and yet those groups are NEVER punished, but, in fact, praised for displaying their “ethnic”, or “racial PRIDE”. The anti White race liberal “Swedes” in the government should be ousted…by force if necessary…and expelled from Sweden. They would be much happier living in the Middle East with the… Read more »

“I Feel Betrayed by My Country”: The Swedes Who Think Their Scandinavian Utopia is Being Ruined by “Refugees”