“We’re Engaged in a Conflict, a War” — Half the French Army is Now Deployed on French Streets 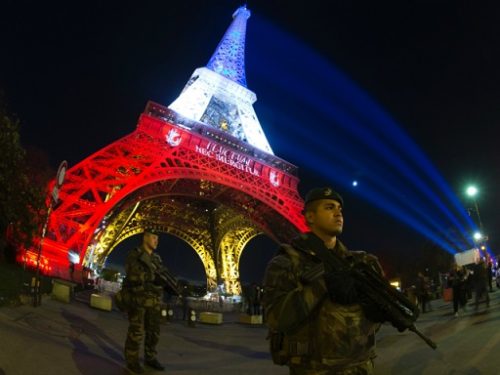 Since the Islamist terror attacks in Paris last November, the streets of major French cities have been guarded by soldiers in full military fatigues. That permanent presence of the French army represents half of all its soldiers now deployed on military operations, but has been dismissed by critics as a political “anti-anxiety” measure.

FOLLOWING the killing of 132 people in coordinated Islamist terrorist attacks in Paris and its northern suburb, Saint-Denis, last November, President François Hollande, declared the attacks on France an “act of war”. In response the French army was sent to the streets of main cities to offer people a sense of security, beefing up operations already begun following the Charlie Hebdo office and Hypercacher supermarket attacks earlier in 2015.

With 10,000 troops across the nation, about 6,500 of which are in the Paris area, the Guardian reports that the scale of Operation Sentinelle is so huge it represents the single biggest military operation in volume of any such French operation anywhere in the world.

Representing a fundamental change to how France polices itself and how the army is used, of all the French soldiers now on active military operations, half of them are deployed patrolling streets at home protecting them from further Islamist terror attacks.

The deployment is not uncontroversial, with critics on both the left and right of French politics taking shots at the operation which is said to cost €1 million a day.

One former prime minister, centre-right Senator Jean-Pierre Raffarin, warned that the soldiers’ elite training and skills are not fully used, other critics say they lose valuable training time. Pay and living conditions have also been criticised, although both have since been addressed to some extent.

Even some military voices have privately expressed scepticism regarding how effectively the soldiers actually prevent terrorists from attacking. One general compared it to the Second World War’s notorious Maginot Line — the line of concrete fortifications, obstacles and weapon installations installed on the French side of its borders with Switzerland, Germany and Luxembourg during the 1930s, which the Germans avoided by invading via the Low Countries to the north of it.

That general highlighted how the presence of soldiers guarding key sites following the attacks of January 2015 did not stop the November attacks on bars, restaurants and the Bataclan concert hall, which were not on the special protection list. Perhaps in response to such criticism, the operation has recently been adapted to make patrols less static, moving soldiers in a “less predictable” way to cover wider areas.

Former director of France’s War college General Vincent Desportes — now a professor at Sciences Po — has warned that the army was overdeployed even before Operation Sentinelle was put in place. He believes that not only is the operation’s chief role a political “anti-anxiety” measure, but that it actively weakens the army as the high demands it faces mean “soldiers are not having rest time and are losing the collective training and savoir-faire”.

On the other hand, the spokesman for Operation Sentinelle in the Paris region, Colonel Benoît Brulon, said it offers more than just a psychological boost, explaining:

“It’s an operation like all the anti-terrorism measures, a combat measure. We’re engaged in a conflict, a war, in which we fight against terrorists. We’re not just here to be visible — even if that visibility helps the resilience of the nation.”

Nearly 100 Jailed in France for ‘Defending Terrorism’ and Other Speech Crimes
Historical Research Criminalized: Paris Court Convicts Professor Robert Faurisson
Subjugated France: Jews Caught in Their Own Trap
Leaked Secret Cable: US Working to Make France a Non-White Country
Dr. Pierce on the Meaning and Importance of Loyalty
For Israel, War is No Longer an Option -- It Is a Way of Life
The Bloodsuckers' Ball
A Nation's Treason
Tags:ArmyFranceIslamic TerrorismLaw EnforcementParisParis Terror AttacksWar

I’ll agree there is something of a Maginot-Line quality about the strategy. The Hitlerian response would be to use the French military to isolate Muslim neighborhoods and then go in and clean them out, killing those who resist and shipping those who surrender to someplace outside France.

“We’re Engaged in a Conflict, a War” — Half the French Army is Now Deployed on French Streets