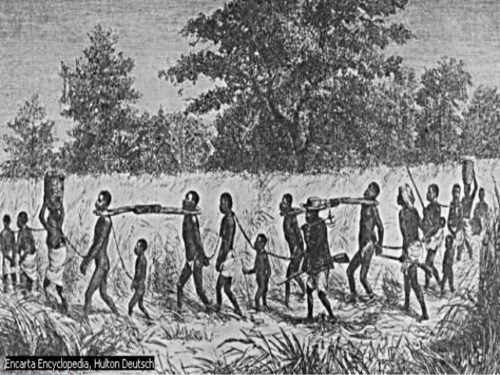 Based on the fact that ~41% of all blacks in West and Central Africa prior to European conquest were slaves, the extreme increase in price of slaves from the relatively small increase in demand that the Atlantic Slave Trade represented, and the anecdotal evidence that more slaves were put to work within Africa following Britain’s global ban on slavery, we can say that the Europeans likely did not cause a single black person to be a slave who wasn’t already going to be one.

2. The Proportion of Slaves in West and Central Africa

3. The Number of Slaves in West and Central Africa

5. The Inelasticity of Supply

6. Our Hands are Clean

Population Estimates for West Africa, Central Africa’s population inferred as a proportion of the West African population estimate based on the trend from 1907 to 1950:

Some other population estimates that will be used later based on the above extrapolations:

The Proportion of Slaves in West and Central Africa

If the estimates for the proportion of the population that are slaves are taken as precise, it averages to 41.61%.

If these numbers seem extreme, remember that Athens was said to have been about one-third slave. And the whole of the Confederate States of America was approximately one-third slave; these are not outrageous numbers for slave societies.

The Number of Slaves in West and Central Africa

The average age of childbirth in African countries is today around 27. So if we assume the average age was 25 back in 1500-1800, then we have a generation time of 25 years.

And so based on this, the Atlantic Slave Trade was about 5.84% of the total slave trade within West and Central Africa at the time.

The Inelasticity of Supply

Elasticity of supply is simply a fancy way of saying “does quantity supplied increase in response to an increase in demand?”. For slaves, if the supply is “elastic”, that means that the suppliers of slaves can easily supply more slaves if the demand goes up. If it is “inelastic”, that means the suppliers can’t easily get more slaves just because more people are willing to buy them.

If the supply is inelastic, then any increase in demand will simply result in the price of slaves increasing. For example, if the supply of slaves was totally fixed and could not be increased, then new buyers would simply bid out some of the previous buyers for whom slaves are now too expensive.

And here we can actually compare the price of slaves in Africa, the number of slaves shipped to the Americas in the prior 25 years (roughly the generation time), their price in Africa, and the Atlantic Slave Trade as a percentage of the overall slave trade in Central and West Africa.

Price of slaves in Africa by year available here

Now the extreme increase in price in response to the very small increase in quantity demanded that the Atlantic Slave Trade represented is evidence that Africans couldn’t readily just increase the supply of slaves. I.e. there wasn’t much or any “excess supply” with which to supply the Europeans. And so they would have to either sell some of their slaves they were already using, or pick up arms and go try to enslave some peoples who up to that point had managed to resist enslavement.

Again, there are all sorts of factors that could be at play that I don’t know about. However, the limited data that exists points to extreme price inelasticity, which is evidence of inelasticity of quanitity supplied — which is a long way of saying “it looks like the Africans couldn’t increase the number of slaves, that the supply was fixed, and as a result when new buyers came along, the price just shot through the roof.”

According to the Encyclopedia Britannica article:

“After the limiting and then abolition of the transatlantic slave trade, a number of these African societies put slaves to work in activities such as mining gold and raising peanuts, coconuts (palm oil), sesame, and millet for the market.”

Of course that is not data, but merely a subjective impression being that the end of the Atlantic Slave Trade did not result in fewer black slaves. They just stayed in Africa.

And when ~40% of the population is enslaved, and people resist with violence being enslaved, it is certainly not difficult to imagine that the supply of slaves was probably quite inelastic.

Our Hands are Clean

Now lets say that the Atlantic Slave Trade did not create a single slave, that it merely moved slaves from Africa to the Americas, where they ended up having a better life and a better chance of surviving (even taking into account the middle passage, which later generations would not have to endure anyway).

And everything points to no increase in the number of Africans who were slaves. And if there was a slight increase in blacks enslaved, it is certainly less than the 12.5 million that disembarked from Africa, and exchange those 12.5 million had a better chance of surviving, and certainly their progeny had a much better life than those who remained in Africa.

The Africans were slaves to themselves well before we came along. We caused none of it, only better conditions in the Americas and their eventual freedom.

Black people have ruined almost every city that they have been dominant. Detroit, Baltimore, Chicago, etc. The white race has a duty to the future generations to remove all people who want to drag down our society. We need to get together as a group and begin this process. The longer we wait, the harder it will be.

This is true, very much. However, it doesn’t change that slavery itself, whether done by white people or black people, is a bad thing. It is bad. Bad. Bad. Bad.

This is all true and easily observable to anyone who is really looking objectively.