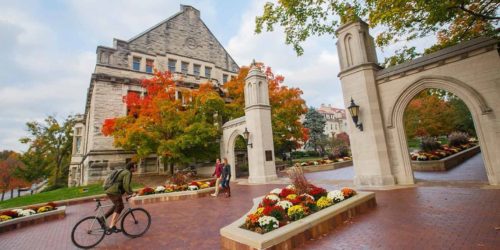 THE COMMUNIST indoctrination center or “college” as it exists in the current year has abandoned all academic rigor and honest inquiry in favor of pushing kosher Marxism on the soft, wailing brown mass that is “tomorrow’s leaders.” The university resembles an adult baby fetish camp more than a place of higher learning, a Jewish pound of flesh generator more than a place for wisdom to be painfully birthed. This is, of course, exactly as planned. Extend your adolescence Whites! Run up massive debt to the friendly merchant! Swallow the most outrageous lies! With this ivy-coated comic opera the goal of White genocide is advanced. Meanwhile the usury victims display the sweet fruits of this “education” as they run in fear from their own shadows, screaming “racisss!”, demanding the Thought Police spring into action — and weeping pitifully.

Rumors of a klansman on campus have proven false after a priest innocently made his way through Bloomington.

Last night around 9:15 PM, social media became a furious storm of confusion regarding a man in white robes roaming along 10th St. and purportedly armed with a whip.

A grim specter from the past returns, whip in hand, ready to reenact scenes from Roots on young people who owe six figures to the Jew lender. Broken and debased scholars with heads full of communist mush react in panic, spewing out 140 character missives full of mentally defective panic. What once prepared tomorrow’s achievers is now a Jewish cargo cult, an especially pathetic and degenerate arm of the State Religion of cultural Marxism and anti-White ignorance.

If you were wondering what sort of education can be purchased for thousands of shekels, here’s your answer. Students so damaged they can’t process reality and see imaginary devils behind every tree. Safe space! Safe space! Sanctuary in the communist cathedral synagogue!

In the spirit of Hoosiers helping Hoosiers, students were quick to look out for each other by spreading word of this potential safety risk.

Let’s pretend this modern version of a witch scare somehow represents our noblest impulses. These are true heroes and good (undocumented) citizens, warning the unaware of the menacing White robes.

For instance, Eigenmann RA Ethan Gill notified his residents via email of the perceived threat in interest of their protection.

Students widely disseminated messages like the above. There was no safety alert released by the University.

Next time more “lock downs,” “trigger warnings,” and extensive counseling for the poor “victims” should be provided. Don’t worry, we’ll just add the cost to what you already owe Shylock.

While the KKK has been active in the area in the past, it later became apparent this klansman armed with a whip was actually just a monk of the Dominican order in traditional white robes. The “whip” he was holding may have been his rosary beads.

Our hysteria might have been a little overdone, but trust me, there’s lots of witches, black magicians, and root wizards out there causing storms and damaging our crops with their “racism” spells.

“This is what happens when there is miscommunication. So what happened tonight goes like this: a person saw white robes and what looked to them like a weapon, got scared (rightfully so), warned people, warned staff, which in turn caused me to warn my residents because I need to look out for my residents, which in turn made it spread.

Yeah, rightfully so. This insane overreaction is so completely understandable and justified.

“In the future, I’m still sending my residents warnings of threats, crime, hate gatherings, and all that but I will wait for a confirmation.”

I’ll still be vigilant for the satanic masses, druidism and the witch’s sabbath, but this time I’ll wait until highly reputable agents of the Holy Inquisition confirm it before we start burning people.

Source: Modern Heretic and The Tab

The Medieval Norse on Baffin Island 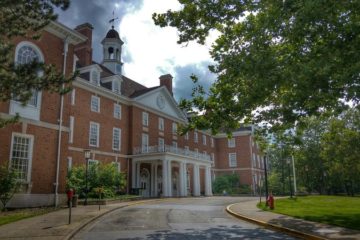 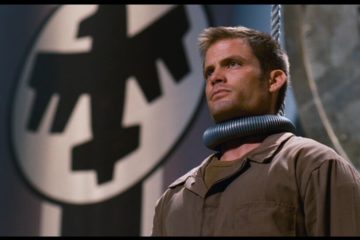 My children do not share my passion for science and technology so when they indicated a willingness to pursue a university education I asked them what they wanted to study. They responded by saying humanities (liberal arts in the US). I responded by saying do not waste your time or my money. I told them that they would get a better education reading the works of a few great white writers. I nominated a few which included Dr. William Luther Pierce and Dr. Revilo Pendleton Oliver. The modern liberal arts degree has only one purpose for a white person in modern society – toilet paper – wipe your backside with it and then flush it down the toilet. It is noteworthy that toilet paper is a lot cheaper than an… Read more »

It’s called INDOCTRINATION. Fill the inexperienced, empty mind with the system’s philosophy of 1. WHAT to think – and even more damaging 2. HOW to think. At the end of this metastasized liberalism, one is saddled with a noose-like debt that enslaves the putty-minded victim through what should be their most productive years. He or she is pouring coffee at Starbucks, stocking shelves/collecting carts at Walmart, throwing newspapers onto the driveway from their car, or other equally useless occupation. It is indeed a sad state of affairs. I was an unabashed “old-fashioned” in college by apprenticing in my profession concurrently with school. My first degree was earned in New Jersey and the second in New York City. In both I was dressed in a suit and tie because was this… Read more »