ONE correspondent, O. R., writes to us about our news reporting on NationalVanguard.org, specifically commenting on our coverage of European nationalist parties:

“There’s an issue with the National Vanguard Web site that has been bothering me lately, i.e., its favorable articles towards nominally-nationalistic European parties that allow non-Whites, including Jews, to join and hold office. I’m aware that this issue (i.e., Kosher Nationalist parties) has been discussed in depth in other forums, but I think it is necessary to discuss NV’s apparent support for these parties….

“Does NV support these parties? I know they rely on freelance writers for many of their articles, so it is not clear if they are simply publishing what they are sent, or if they publish only what they endorse. If the former, they should at least provide a disclaimer stating the fundamental flaws of the multi-racialism, conservatism, and Jew-friendly policies of these parties.

“Despite the denials of many wishful-thinkers, these right-wing European parties are primarily geographic and/or cultural nationalists. They are not White nationalists. One of their main points is to crack down on “Islamic extremism.” Now, obviously, none of us want Muslims or non-Whites in Europe. But to focus on the “Islamic extremists” as the primary threat is doing the work of the Jews. It ignores the looming demographic racial disaster and the reasons behind it. And it focuses energy against the non-Whites who do not subscribe to the New World Order and will not move in next door and marry White women. In other words, it focuses on the least dangerous of the non-Whites, and the ones that the Jews oppose the most.

“Some of these parties are strong supporters of democracy and assimilation of non-Whites. Others are openly Zionist. [Some support] ending immigration, and then integrating the non-Whites already present….

“It would be unfortunate if the National Alliance has shifted its ideology in support of conservative parties in Europe.”

Let me make one point very clear: The National Alliance stands alone and we do not endorse a conservative or populist approach to our race’s problems, since such an approach is bound to fail. We want a revolution in the hearts and minds of our people so we can remake our civilization into one which serves and protects the race.

Having said that, though, we do want and in fact encourage friendly relations with Whites of good will and racial consciousness no matter where they live, what language they speak, what their economic status may be, or what political party or group they may belong to. But we do not officially endorse or support any party or any group except the National Alliance.

As our founder William Pierce expressed many times, and as I maintain on this radio program and in our other media: The National Alliance is unique. And it is uncompromising in its principles.

We maintain that Whites are the descendants of the race that developed in Europe over many millennia and created Western civilization. We maintain that the Jewish race is an alien, unassimilable race and its international power structure is now by far the greatest threat to our survival. And we maintain that our unalterable goal is White living space, freedom and self-determination for our people in a state which makes racial survival, racial integrity, and racial progress its highest and non-negotiable goals.

Our definition of ourselves is a biological definition, a racial definition, and religion and geography have nothing to do with it. No biological Jew, nor any member of the African or Asian races can be “converted” into one of us as one can be converted to a religion. No one not clearly of European stock can be a member of our people — and, as National Vanguard writer Mike Rienzi has pointed out, we will soon have the technology to accurately test for this. Citizenship must be based on descent, not on an accident of geography or on artificial lines drawn on a map.

Assimilation of immigrants can work for immigrants of various nationalities but of the same race — as America proves. But it does not work for members of radically different races, as America also proves. Attempting to integrate the radically different Mestizos and Blacks into Euro-American society has been a total failure. The founding fathers and American patriots of many generations warned us of this, as the Alliance continues to warn us today.

An even greater failure was the importation of an even more dangerous race — the Jews — who, unlike the Blacks and Mestizos, had the advantage of similar skin color to ours and quite high average intelligence. The Jewish consciousness of their racial difference from us, and their desire to survive as a unique and dispersed people, were bars to assimilation and, more than that, were spurs to a sub rosa war on Whites that has yet to reach its conclusion.

So why do we report on — and republish reports from — nationalist parties in Europe or elsewhere who do not have the same uncompromising principles we have? Before I tell you the main reason for that, let me say one thing about these parties. We maintain open communication with many of them. We want to know everything that’s going on in their countries that impacts White people or the ability of White people to tell the truth about race and Jewish power. Reports from these parties are useful for this purpose; and many of them are worthy of publication.

And we know from these communications that many of the members of these parties are themselves far more radical than the milquetoast platforms the parties publish. We also know that some, though far from all, of the top leaders of these parties are more radical than they believe it is politic to say or espouse publicly. In some cases, they must tone down their rhetoric in order to stay out of jail in countries that don’t have a first amendment, in countries where even expressing one’s racial feelings or telling the truth about Jewish power is an indictable offense.

In some cases, however, the party leaders, though they may love their own people, really do wrongly believe that a racially mixed Europe is acceptable as long as it doesn’t “go too far” and that a modus vivendi can be reached with the Jewish supremacists. Even in these cases, though, we want to maintain open contact with members and officials of these generally White-friendly parties. Our mission is educating and inspiring White people to understand our people’s plight, to understand what our options really are, and to do the right thing. We can’t do that if we make enemies of good-hearted people who haven’t yet reached a mature understanding of these things. When they are ready — and we are making more and more of them ready every day — they will join us. 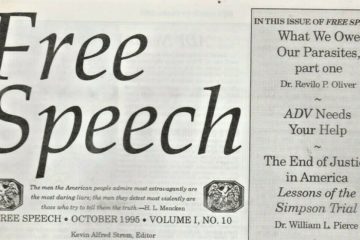 Supporting the Only Cause That Really Matters