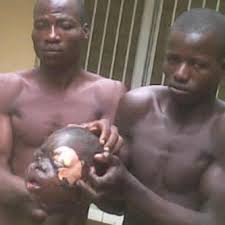 African student in US states it is an “accepted practice” — as is the stoning to death of “witches.”

TEACHING ANTHROPOLOGY at a small college, I sometimes have foreign students talk to my class about their native cultures. West African students are in great abundance. Often their speech is so poor and disorganized that, interesting as they sometimes are, I am inclined to doze. (ILLUSTRATION: More information on human sacrifice in modern Africa can be obtained from the article Uganda: In the Land of Human Sacrifice from Newstime Africa)

Nevertheless, one day during an otherwise incomprehensible talk I suddenly became aware that this particular Nigerian student was talking about human sacrifice. He mentioned it only briefly, but I made him explain himself at greater length. Once on a country road he said he had come across a body ritually decorated. All the traffic was making a wide detour.

I asked other African students about this. One said that in his town human sacrifice for religious purposes was an accepted practice. Another admitted that the public officials in his area once announced that after 10 p.m. anyone caught in the streets would be ritually sacrificed. Witchcraft is another thing. Virtually all my African students, whether or not they have been raised as Christians, believe in witchcraft. A Nigerian student told me he had himself seen a “witch” stoned to death. She was a witch because she had made a confession to that effect.

EDITOR’S NOTE: For those sheltered souls who find this level of primitivism hard to believe, steel your souls and watch this incredible video documentary about modern Liberia, at the end of the article “Cannibalism Still Stalks African Conflicts.”

Working for the mining industry on the African continent is a very eye-opening affair, even for those who are lucky to have been assigned fly-in/fly-out rosters. It was during one of these visits that I got my first glimpse of Congoid behaviour. Prior to that my only experience with blacks had been Australoids, who I am happy to report do not engage in cannibalism or if they do they do a good job at hiding it. I cannot speak much about African-Americans known colloquially to my American cousins as the “Great North American Pavement Ape” but I have been told enough to believe that given the right opportunity they too would also find eating one another an acceptable practice. For those of you who think the only difference between whites… Read more »

Greetings WHITE_WARRIOR. An Australian politician was pilloried by the media a decade ago because she mentioned Australoid cannibalism. The Australoids did not want to waste their deceased relatives. You have certainly lived a very experienced life! I hope you write a book. Give a copy to your local library and a copy to the national library for posterity.