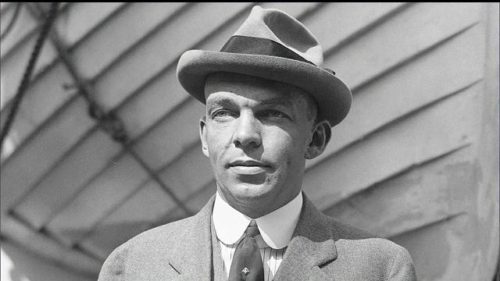 WE HAVE in these pages discussed the tragic life stories of two great White inventors, N. B. Stubblefield and Lee De Forest. The former came to grief at the hands of Wall Street stock swindlers. The latter was bilked out of a fortune by David Sarnoff’s Radio Corporation of America. Equally disheartening was the career of Edwin H. Armstrong (pictured), the inventor of FM radio. A great deal of Armstrong’s life was spent in litigation with RCA and other companies who had infringed on some of his forty-two patents.

In 1954, in utter despair at his treatment by companies who were making millions of dollars annually out of his inventions, he jumped to his death from the window of his New York apartment. What the obituaries did not say was that there was much more behind Armstrong’s suits than money. A friend of his, John Bose, recently testified, “If RCA or any of the others had just been willing to stand up and announce that they gave Armstrong full recognition for his inventions, he would have been satisfied and wouldn’t have cared about getting even a penny.”

Armstrong began his first FM (frequency modulation) broadcasts in 1937 from his own radio station in Alpine, New Jersey. Today there are thousands of FM stations throughout the world. The audio part of television is based on Armstrong’s pioneering work. Perhaps those most in debt to Armstrong are lovers of serious music, who are able to enjoy in the comfort of their own homes and for relatively little cost the high-fidelity reproductions of the most sublime musical creations of Western genius.

The financial beating given Stubblefield, De Forest and Armstrong calls into question the system that makes it possible. Can it be blamed on the free enterprise system itself, which at least in recent times seems to reward speculators and wheeler-dealers more than it does producers and inventors? Or can it be blamed on the perversion of free enterprise by people incapable of creating and understanding the system they are only interested in milking?

In the Tampa Bay area we have a radio station WMNF that bills itself “community radio” and it is said to be a creature of a Nathan Stubblefield foundation. This station is very “left wing” and the news director Rob Lorei is almost certainly Jewish, the programming features the likes of Amy Goodman, FAIR, the local Muslims, Jews And blacks have their hour and Lorei sees to it that immigration is heavily promoted in his call in segments while he has become quite adept at blocking and putting on hold dissenting voices. In your article, “Edwin Armstrong: Another White Genius Fleeced By Jews” I was stunned to notice N B Stubblefield mentioned and wondered if this the the same Stubblefield. That in turn would raise the question — what is… Read more »