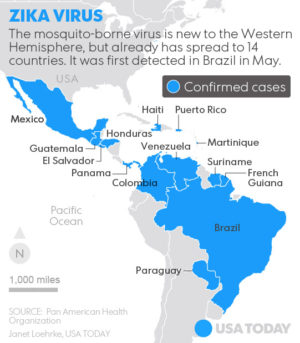 Deadly disease now infects Mestizo invader populations in their home countries; US authorities had been telling us that only mosquitoes could transmit the disease and that there was little to worry about because US mosquito populations are “well controlled.”

A CASE OF Zika virus infection transmitted by sex, rather than mosquito bite, was discovered in Texas on Tuesday, a development sure to complicate plans to contain a global epidemic.

The Dallas County Health and Human Services Department reported that a patient with the Zika virus was infected after having sex with someone who had returned from Venezuela, where Zika is circulating.

After the report, the Centers for Disease Control and Prevention changed its advice to Americans visiting regions in which the Zika virus is spreading.

Men having sex after traveling to these areas should consider wearing condoms, officials said, although they did not indicate for how long this would be necessary. Pregnant women should avoid contact with semen from men recently exposed to the virus, federal officials also said. The agency plans to issue further guidelines soon.

Infection of pregnant women with the Zika virus has been linked to birth defects in their infants. But the infection is not usually life-threatening for others, and produces symptoms only in 20 percent of patients.

But sexual transmission, experts said, adds a new level of difficulty to detecting and preventing Zika outbreaks, which may require not just mosquito control but also safe-sex education. Health officials now face the prospect of stopping an infection that is usually silent and for which there are no widely available tests; it may be transmissible sexually, yet there may be no sign until a child is born.

Still, he cautioned that sexual transmission is probably rare compared with the viral spread by mosquitoes, taking place in more than 20 countries and territories in Latin America and the Caribbean.

Scientists have suspected for several years that Zika could be transmitted sexually. In 2008, a malaria specialist who caught the Zika virus while gathering mosquitoes in Africa passed the infection to his wife shortly after his return to Northern Colorado.

Because his wife had not left the state and there were no mosquitoes in the region capable of carrying Zika — and because the couple did not infect any of their four children — experts concluded the only logical explanation was transmission through sex.

Last year, French scientists described finding viable Zika virus in the semen of a 44-year-old Tahitian man who had recovered from an infection during a 2013 outbreak in French Polynesia.

The investigators could not determine how long the virus had persisted because he had had more than one episode of fever that year that might have been related to the Zika virus.

The C.D.C. confirmed the Zika infections in Dallas. Health officials in Dallas said that the person infected during sex had not left the United States, and that there was no documented transmission of the virus by mosquitoes within the city.

The returnee from Venezuela had visible symptoms of Zika infection, a spokeswoman for the county said, but she did not describe exactly what they were.

The health department did not describe the gender of each partner. The only two previously known cases suggesting that sexual transmission was possible involved men with visible blood in their semen, and scientists theorized that the virus had infected their testes or prostates.

In its statement on the Texas case, the C.D.C. noted that there was “no risk to a developing fetus,” presumably implying that neither partner was pregnant.

Although Zika virus infection causes relatively mild symptoms in adults, scientists suspect it is behind a surge in cases of devastating birth defects, including microcephaly, in Brazil.

Until Tuesday, the C.D.C. had posted only a brief acknowledgment on its website that sexual transmission had “been reported.” There had been no mention of the possibility on its advisory pages for travelers, nor did it advise the use of condoms.

By contrast, British health authorities suggested last week that couples delay efforts to conceive for one month if either partner had just returned from a country where Zika was spreading. Public Health England suggested that all men use condoms for at least 28 days after returning, and that men with Zika symptoms, including fever, rash, red eyes or joint pain, avoid having unprotected sex for six months.

In the United States, the possibility of sexual transmission “has really hit a nerve in the corporate community,” said Dr. David O. Freedman, an epidemiologist at the University of Alabama at Birmingham who is sometimes called on to advise businesses about medical issues in travel.

Business travelers to Latin America and the Caribbean now must worry about passing it to their partners, he said: “There’s a lot of concern out there, but just no data to address it.”

The Texas case “is going to raise a lot more concern,” said Scott Weaver, director of the Institute for Human Infections and Immunity at the University of Texas Medical Branch in Galveston and an expert on the virus.

He said it would be important to identify other factors that were red flags for transmission through sex. For example, the men in the cases in Colorado and French Polynesia both had blood in their semen.

Dr. Anthony S. Fauci, director of the National Institute of Allergy and Infectious Diseases, said it was important to determine whether the virus survived in semen longer than it does in the blood, from which it usually disappears after a week or two as the victim recovers.

After nearly 40 years of studying the Ebola virus, doctors learned for the first time just last year that it could survive in semen for weeks or months and infect women through sex.

The prospect of transmission from men who never had symptoms could pitch clinicians into uncharted waters.

“If this can occur in the complete absence of signs or symptoms, then it’s going to be very tough to get a handle on how high the risk is,” Dr. Weaver said.

Experts in mosquito-borne diseases expect some local transmission of the Zika virus through mosquitoes in Florida and along the Gulf Coast once the weather warms up. How far it spreads will depend on how aggressive mosquito control is.

Dr. Kristy Murray, an infectious disease specialist at Texas Children’s Hospital, said there had been seven confirmed Zika cases in Houston, where she is based, all in travelers back from Zika-infested areas.

Local health authorities are girding for battle against mosquitoes when it gets warmer.

“It will be really interesting to see what happens this summer,” Dr. Murray said.

This will make the incoming Mestizos look bad, clearly the work of hate mosquitoes and hate sex.