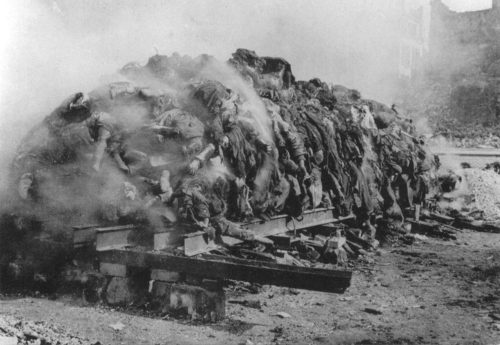 THE LOGO OF the World Jewish Congress appears on a site called StopHolocaustDenial.org, which has a page titled “The Final Solution.” On that page is a slideshow of eight images that are apparently supposed to represent the Holocaust. The only image on that page showing dead people (as of 31 January 2016) is the one that you see above.

Update. The day after I posted this commentary, WJC replaced that image with a different image.* It is nice that they are at least able to recognize when they’ve been caught, but here’s a screenshot as documentation of how reckless they were: 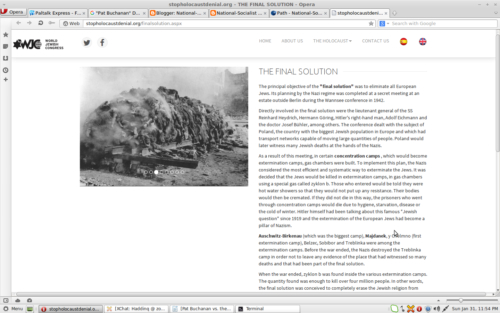 The details of this photo are such as to make a thoughtful person doubt that it shows a scene from a concentration-camp. The bodies are neither nude (as if gassed in a fake shower-room), nor clad in striped concentration-camp uniforms, but dressed in normal civilian clothes. You can see a damaged multistory structure in the background, suggesting that the photo may have been taken in a bombed city.

In fact the photo shows German victims of Anglo-American bombing. In 2011 The Atlantic published a collection of photos with commentary by Alan Taylor, titled “World War II: the Fall of Nazi Germany,” where this same image carries the following caption:

21. A large stack of corpses is cremated in Dresden, Germany, after the British-American air attack between February 13 and 15, 1945. The bombing of Dresden has been questioned in post-war years, with critics claiming the area bombing of the historic city center (as opposed to the industrial suburbs) was not justified militarily. [Alan Taylor, The Atlantic, 9 October 2011]

You might think that a high-profile and extraordinarily well funded organization like the World Jewish Congress would not be so reckless — indeed, that they would have highly competent experts checking everything that they do to make sure that they get it right — but you should not be so surprised. It is commensurate with Friedrich Nietzsche’s observation: Power makes stupid.

So much for the pretended intellectual integrity of the Jews.

From another perspective, we can say that they do it because they get away with it.

How can they get away with it? That is a failure on our side, mainly a failure of moral courage. Even people in what is supposed to be alternative media often shirk their duty as truth-tellers when faced with a claim promoted under the banner of the holy Jewish Holocaust.

Don’t let them continue to get away with it. The Holocaust myth should be ruthlessly demolished with facts and logic whenever it makes an appearance, until Jews find that this kind of attempt at emotional manipulation does them more harm than good.

* The image that the WJC posted as a replacement shows corpses at Buchenwald. This is still deceptive, and I will explain why. This kind of image from camps captured by U.S. and British forces has been used often to promote the belief that Jews were gassed, but — and it is an important fact that you should know — mainstream historiography today says that nobody was gassed at Buchenwald, nor at any other of the camps that U.S. and British forces “liberated.” Not at Bergen-Belsen, not at Dachau, nor any other camp in Germany or Austria. For decades now the gassing-claims have been restricted to camps in Poland. The pictures that we are customarily shown as evidence for the Holocaust mostly show victims of a typhus-epidemic that erupted as the war was ending.

Conditioning for Death
Cultural Transplants
Demjanjuk Trial Evidence Faked
Neuron Bombs: The Holocaust and Other Atrocity Stories
World War 2: Battling the People of the Lie, part 4
Not a Coincidence: UK, Like US, to Adopt New "Definition of Anti-Semitism"
American Dissident Voices: What is Right and What is Wrong
The Burden of Jewing, Part 2 — “Conversion”
Tags:Jewish liesJewsThe HolocaustWorld Jewish CongressWorld War 2

Genocide of Whites: Act to Stop It!

Trump's Wall and the Lessons of History

Perhaps the “Holocaust” might be likened to the inflatable King Kong described in Viktor Suvorov’s Spetsnaz: “I was standing on the top of an enormous skyscraper in New York when I saw King Kong. The huge gorilla surveyed Manhattan triumphantly from a dizzy height. Of course I knew it wasn’t real. But there was something both frightening and symbolic in that huge black figure. “I learnt later that the gorilla was a rubber one, that it had been decided to celebrate the fiftieth anniversary of the showing of the first film about King Kong by creating a gigantic inflatable model of the beast and placing it high above New York. The rubber monster was hauled up and swayed about in the wind. From the technical point of view the operation… Read more »

How difficult would it be to hire people to hand out business cards with ‘Holocaust Deprogramming Course’ http://www.holocaustdeprogrammingcourse.com and ‘Jan 27’ http://www.Jan27.org inscribed upon them (maybe other sites too), while these activists stand outside all of the Holocaust Hoax museums and monuments around the United States?

As I recall it the US 12th Army preliminary report about Buchenward stated that the majority of homicides there were committed by the communist inmates who ran the camp. The commander and a doctor killed some inmates and were subsequently executed by the SS.