THE COPYRIGHT to the book The Diary of Anne Frank is owned by the Anne Frank Fund of Basel, Switzerland. Because Anne Frank died of typhus in 1945, any book written by her would have entered the public domain in 2015. To prevent that (so they can keep profiting from sales), the Fund has admitted that much of the text was interpolated after the end of World War 2 by Otto Frank, who was Anne Frank’s father. (ILLUSTRATION: Otto Frank, collage artist and salesman extraordinaire.)

Of course, this has been known in certain circles for quite some time. Parts of the text, although attributed to Anne Frank, show a distinctly different handwriting. Also, parts of the text were originally written with ink from a ballpoint pen, and those first came into popular use in 1951. There has long been a number of tell-tale clues that The Diary of Anne Frank isn’t what it purports to be, but rather is largely fictional and written by someone other than Anne Frank.

But the Jews in charge of that book have never before admitted this obvious fact — until now. And the reason they’re doing it now is money. From now on, you’ll be hearing how Otto Frank, being very well-informed about his daughter’s experiences, was merely acting as her ghost-writer, putting in nothing other than what actually happened. The Jews won’t give up any more than they have to, in order to keep this financial resource productive for themselves.

The Wikipedia entry on the matter relates “In 2015 the Anne Frank Foundation made an announcement, as reported in the New York Times, that the diary was co-authored by Otto Frank. According to Yves Kugelmann, a member of the board of the foundation, their expert advice was that Otto had created a new work by editing, merging, and trimming entries from the diary and notebooks and reshaping them into a ‘kind of collage,’ which had created a new copyright. Agnès Tricoire, a lawyer specializing in intellectual property rights, responded by warning the foundation to ‘think very carefully about the consequences.’ She added ‘If you follow their arguments, it means that they have lied for years about the fact that it was only written by Anne Frank'”

I wonder what all those judges in Germany are thinking now. For many years, they’d been deciding civil and criminal defamation cases involving The Diary of Anne Frank in favor of Otto Frank, who claimed that the book was the work of his daughter alone — and who wailed he was being defamed and harmed by revisionist historians who said that she wasn’t. And now it turns out that the revisionists were right all along. All the time. And Otto Frank, who won every case, should have lost every case. The German courts did the wrong thing over and over again for almost half a century.

Ursula Haverbeck: Update on the Verdict
Germany: Ursula Haverbeck Sent Back to Prison
Auschwitz: Why Did They Say Nothing?
A Cringing Lord
The Shoah: Fictive Images and Mere Belief?
Understanding the "Holocaust"
Surprise, Surprise: Cemetery Officials Say There Were No "Anti-Semitic" Attacks
Anne Frank Hoax Exposed
Tags:Anne FrankHolocaustHolocaust RevisionismJewish hoaxesRevisionism 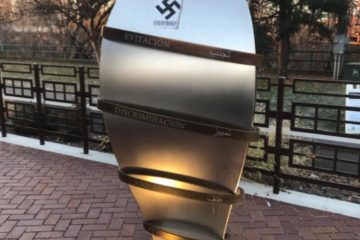 Is This What We’ve Become?

The original has no interpolation and only some annotations by some other hand in the famous ballpoint pen.

Its an easy mistake to make.

Hi David Further to my last post which seems to have vanished I think there’s a couple of other small errors in what you are saying: You say “Parts of the text, although attributed to Anne Frank, show a distinctly different handwriting.” Not according to the BKA, all the text in the original diaries are written in the same grey/blue or thin red or green ink and are all in exactly the same hand. You also say “Also, parts of the text were originally written with ink from a ballpoint pen, and those first came into popular use in 1951.” You are correct in that ballpoints came into use in 1951 however none of the original Anne Frank text was written in ballpoint. I’m not sure how you have come… Read more »

Hello again David Has any one actually said ” Otto Frank, being very well-informed about his daughter’s experiences, was merely acting as her ghost-writer, putting in nothing other than what actually happened.” apart from you that is? So this is really speculation on your part and not at all accurate anyway. I’ll bet those judges in Germany are actually thinking “Phew, thank goodness we didn’t listen to those revisionists and actually did get it right. Over and over again. Finally, as your whole text starts to fall to pieces you might want to consider what use the Anne Frank Fond in Switzerland and pretty much the whole of the legacy of Anne Frank’s diaries have been put to. The “profits”, as you describe them, are donated to the likes of… Read more »

“The “profits”, as you describe them, are donated to the likes of UNICEF, childrens charities and of course various Jewish support projects.”

Oops, you revealed your hand you kike snake. Of course the profits are given to Jews. That’s the entire point. You think you’ve disproved something when you’ve only admitted your type’s parasitism.

Is “Kike Snake” classed as crude language, or incivility?

Uri,
no businesss like Shoa-sh**.
Why did the Nazi – yes the Nazi (!) – Otto Frank have to pay a New York Ghostwriter by court-order?
An original script was never published! Never ever!
So what are you talking about?
The Bundeskriminalamt could never define when the script was written. It did define the meddling with ballpoint pens. Putting the puzzle together, it shows that it was written by several adults. And the poor Anne Frank did move on in show business and turned out as Audrey Hepburn.
Jews lie.
Cheating is part of their socialisation.
So, go and read your diary and get out of Switzerland, go to the original jewish homelands: hell – the home of your father Satan; your home.

“Why did (removed as contentious) Otto Frank have to pay a New York Ghostwriter by court order?” I’m guessing you are referring to Meyer Levin who was engaged to represent the interests of Frank and the “Diary” in the US and also to MEYER LEVIN v. OTTO FRANK ET AL. (03/12/57)? Yes, Otto Frank did receive a court order to pay $50,000 to Meyer Levin. Firstly, Levin wasn’t a ghostwriter but wished to (amongst other things) create a play which Frank didn’t like as it appeared to sanitize the diary and make the story a fair bit more palatable to the Broadway audience at whom it was aimed. The court, as far as I can see from the case notes as published – http://ny.findacase.com/research/wfrmDocViewer.aspx/xq/fac.19570312_0041130.NY.htm/qx decided in support of Levin and… Read more »

Sorry , I hadn’t signed into my old email so I didn’t see your thoughtful replies.

Actually I’m not Jewish, no relation at all, just a seeker of truth and an identifier of inconsistencies.

I seem to have touched a bit of a nerve though. My apologies if my indications of errors appear to be any sort of an attack on your religion.

Still no answer as to which parts of the text were writtenin ballpoint pen . . . ?

And still no replies on which parts were written in ballpoint pen . . ?

Hey there, it is years after your dispute. I’ve just read the Anne Frank’s Diary (the full 2013 year edition) and i was really, for several days, thrilled. Especially after checking her photos in the web. That very special sadness, existential, unrepeatable lonelyness and wisdom in her eyes. What a person. There is nothing like that in faces of Edith, Otto or even Margot (nor anyone of Anne’s friends). And she was 15 y.o. Who she could be if survived? Story about ballpoint pen is stupid because of quite a different reason, than you, Uri, evoke. It is because the book was published for the first time in 1947, while ball pen were sold since 1951. If there are any traces of ball pen (what an idiot made them), they… Read more »

Who cares what the criminal German law enforcement says about the Anne Frank production? Germany has been under occupation from 1945 forward. So why do people pretend that Germans control their country. Children say: Let’s playlike. The media does it every day.

Truth Be Told. It would seem that the Aryan Race are now the True wanderers of the lands, searching for a home.

Notes on Possible Fraudulence of Anne Frank Diaries. —————————————————————- Summary. ———— Photographs of the entire diary need to be published, not just typed up versions. The most likely conclusion is that the diaries are based on Anne Frank’s writings, hugely extended and polished her father, and other professional writers. The diaries are now exploited internationally and largely at public expense, to fund Jewish interests and to a lesser degree peace and tolerance amongst the youth in general. Background. ————- The raw handwritten diaries have never been published in photographic form. Withholding the primary evidence for checking their authenticity is highly suspect. Only odd pages have been put on display, and an unknown number of pages were lent to the BKA for material analysis. In June 2019 GR emailed the European… Read more »

Greetings George. As I recall it, the original diary was four inches by six inches by a quarter of an inch thick before naughty Otto Frank made it 300 pages thick.