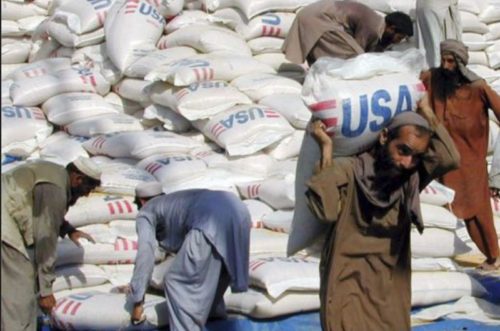 THE NEOCON invasion of Afghanistan and the subsequent occupation and “rebuilding” — courtesy of the American taxpayer — has been a $100 billion flop, as that nation’s economy and security situation continues to worsen, an official report has revealed.

The latest Special Inspector General for Afghanistan Reconstruction (SIGAR) report — an independent oversight agency created by Congress in 2008 — dated January 30, 2016, reveals the utter failure of all attempts at “rebuilding” and “securing” the country over the last ten years.

The 230-page report says “Afghanistan [has] proved even more dangerous than it was a year ago.”

Despite nearly 10,000 US troops still on the ground more than ten years after invading the country, the “Taliban now controls more territory than at any time since 2001,” the report says.

Furthermore, “vicious and repeated attacks in Kabul this quarter shook confidence in the national-unity government. A year after the Coalition handed responsibility for Afghan security to the Afghan National Defense and Security Forces (ANDSF), American and British forces were compelled on several occasions to support ANDSF troops in combat against the Taliban.”

This lawlessness and “lack of security has made it almost impossible for many US and even some Afghan officials to get out to manage and inspect US-funded reconstruction projects,” which has led to widespread corruption and graft, exploiting the millions of US tax dollars being poured into the country.

Another task force found that “millions of dollars were being embezzled while Afghanistan pays for numerous nonexistent ‘ghost’ schools, ‘ghost’ teachers, and ‘ghost’ students,” the SIGAR report continued.

A military performance audit found that despite US training efforts, the Afghan National Army’s National Engineer Brigade “is incapable of operating independently.”

In addition, “intractable insurgents, cutbacks in foreign military personnel, persistent emigration of people and capital, and a slowing global economy are shifting Afghanistan’s economic prospects from troubling to bleak,” the report continued.

The large sum of funds that were provided in annual assistance did little to alleviate poverty, “because the government did not focus on the poor. Today, 70 percent of the population still lives on less than $1.75 a day.”

Afghanistan recently scored poorly in the “High Alert” and “Worsening” lists of the United Nations-supported Fund for Peace’s empirically driven Fragile States Index 2015, with particularly bad marks in areas like demographic pressure, refugees, poverty and economic decline, and security, the report pointed out.

All in all, the $100 billion of US tax money sent to Afghanistan has been a complete waste, and has vanished into a Third World black hole of corruption and chaos—and this is one of the countries which is supposedly providing all the “educated refugees” to Europe to strengthen the economy there.

* The U.S. budget deficit for the fiscal year 2015, which ended in on September 30, was $435 billion, according to the Congressional Budget Office.

Debunking A Century of War Lies
Hey Brussels: It’s Fun to Fight Wars for the Jews, Isn’t It?
The Early Days of the Neocons
How The Jewish Neocons Brought Death and War to the World
Fake News and Fake Intelligence Are the Neocon Stock-in-Trade
Republican Candidates in Need of Emergency Surgery
Pennsylvania: Jew-Critical Journalist Arrested, Harassed, Released at Pittsburgh Airport
Hal Turner: a Special Case
Tags:AghanistanNeoconsWar on Terror

Another white life lost in a pointless mid-east occupation: https://www.nytimes.com/2018/11/04/us/utah-mayor-killed-afghanistan-brent-taylor.html