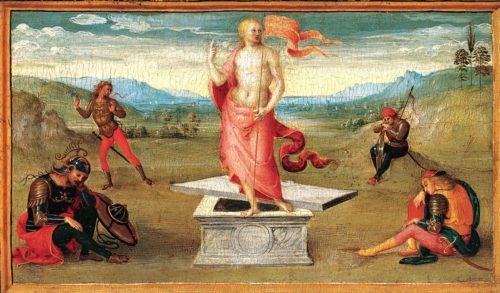 Joseph’s lunatic argument seems to amount to “my feelings are hurt because I can never be Jesus if Jesus is White.”

Justin Renel Joseph, 33, filed a lawsuit in Manhattan Supreme Court alleging that four masterpieces exhibited in the museum are the product of “offensive aesthetic whitewashing” in their portrayals of Christ.

Mr Joseph, who is acting as his own lawyer, argues the “racist” paintings depicting an “Aryan” Jesus should be removed and that their inclusion at the attraction was an “extreme case of discrimination”, reported the New York Post.

He claims Christ had “black hair like wool and skin of bronze colour” and that, as a man with the same physical traits, he felt “rejected”.

The offending paintings causing him “personal stress” were ‘The Holy Family with Angels’ by Sebastiano Ricci; ‘The Miracle of the Loaves and Fishes’ by Tintoretto; ‘The Crucifixion’ by Francesco Granacci; and ‘The Resurrection’ by Perugino.

“They completely changed his race to make him more aesthetically pleasing for white people,” Mr Joseph told the newspaper. “I’m suing a public venue which by the Civil Rights Act of 1964 can’t discriminate on a protected basis.”

The museum defended its inclusion of the paintings, calling them “important, historically and artistically”.

Metropolitan Museum spokeswoman Elyse Topalian said: “When they were painted, it was typical for artists to depict subjects with the same identity as the local audience. This phenomenon occurs in many other cultures, as well.”

Court papers reportedly say: “The implication that someone who possesses physical features like the plaintiff could not be the important historical and public figure of Jesus Christ… caused the plaintiff to feel, among other things, rejected and unaccepted by society.”

Italy Refuses to Join US Coalition in Syria

'I Stand With Israel' License Plate Proposed For Ohio

Oh boy, watch White Christians stumble all over this one! No doubt some hard cash will change hands in order to alleviate this latest example of “White racism!”