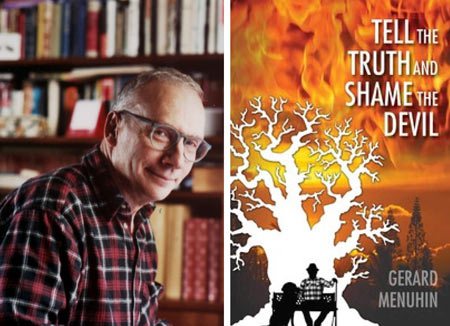 Yehudi Menuhin’s son, Gerard Menuhin, says the “Holocaust” is a hoax; the Germans were the victims of World War 2; and the real world problem is Jewish international finance.

GERARD MENUHIN COULD NO longer bear the lies being perpetrated against Germany and risked all to unmask what he called the “biggest lie in history” and the mightiest fraudulent criminal enterprise in mankind’s history — the Holocaust industry.

In this, his latest book in English, Gerard Menuhin breaks through every taboo barrier.

He writes: “The Holocaust is the biggest lie in history. Germany has no blame for the Second World War.” He also makes a case for Adolf Hitler being the only statesman in the modern era who could have liberated the enslaved people of planet Earth from the clutches of organized world Zionism.

“I suppose it began with a sense, nothing more. Not even a vague sentiment, let alone the certitude that what the average child is taught about major historical events is a pack of lies. It was just a lurking mental itch. My father never spoke of the war, any more than he spoke of anything negative or disagreeable or, indeed, about the past at all, if he could help it.

“I never gave the subject much thought, occupied as I was with my daily drudgery, until the Nineties, when, while I was ordering the contents of my deceased grandparents’ house, I chanced on a copy of the National Zeitung, the patriotic German newspaper to which my grandfather had contributed a column for several years during the Sixties.

“Due to the exceptional nature of the twelve years of National Socialism, a large and growing body of lurid fiction and alleged fact has materialized, based on its dramatic superficialities rather than on any study or comprehension of its socialist policies, and inspired by a particular agenda.

“Sobriety rejects sensationalism. A perusal of reputable historical sources, some of them quite hard to find, helped me to form my own opinion. The most powerful persuasion, however, did not come from the rather dry accounts in my reading, but from the perfectly straightforward deduction that a people with the traditions and culture of the Germans did not almost overnight become barbarians and commit mass murder.”

Gerard was punished for breaking ranks and declaring himself on the side of truth.

In 2005, he was fired from his position as chairman of the Yehudi Menuhin Foundation after giving an interview in the Deutsche Stimme newspaper in which he said:

“An international lobby of influential people and organizations is trying to keep the Germans under pressure. Some nations — mainly America, but other Europeans, too — are profiting from an obedient Germany.”

He also called on Germans to stop paying taxes and thus protest at the outflow of German funds to the European Union. “People cannot be eternally exploited in this way,” he said, “as long as there is a budget deficit, no German public money should flow abroad.”

In his regular column with the Nationale Zeitung newspaper, Gerard condemned Jewish “souvenir hunters” who gather evidence in Germany to help them to lodge financial claims for wartime persecution. …

From the promotional material for the book:

“Many know that something is not right in the world. Nations engage in perpetual war while bankers and armaments makers line their pockets from the carnage. The average citizen of the world has been cut out of the decision-making process of government, whether he lives in a democracy, republic, theocracy or dictatorship.

“All the while, the ruling elite grow stronger and richer as the real producers struggle to survive. Behind the scenes, events are controlled by a coterie of ethnic puppetmasters who work their marionettes in high places out of public view. How did this world get to the dark place it is today?? Who could have stopped it and what can we do today?

“The first section of the book concerns Adolf Hitler, his character and intentions, and the real causes leading up to the outbreak of WWII, including the actions of the real culprits and the rejection of the great lie.

“The second section enlarges on the activities of the real culprits, provides a historical overview of their progress, their nature, their power over finance and the media, and the methods by which they achieved it.”

Mr. Menuhin is very hard on Israel and “self-chosen” Jews. Of his own family, he says “If all Jews were like the Menuhins, there would be no Jewish question and NO ANTI-JUDAISM!” But he adds “Unfortunately neither two nor 1,000 of the righteous suffice to atone for the damage caused daily by millions of Jews in the world of international finance”. It is that “world of international finance” that he blames for forcing war upon Hitler and the National Socialists.

Tattoo Criminals -- Elie Wiesel Should Be Investigated for Holocaust Fraud

Wow. A Jew that speaks the truth?! Can it be possible?

“Wow. A Jew that speaks the truth?! Can it be possible?” That reminds me of a parenthetical comment in one of Robert Dun’s books, where, after referring to a “a Jew of good will,” Dun added: “rare, but they exist.” Make that “extremely rare.” The Enlightenment-era philosophe Baron d’Holbach was prepared to accept that there were decent Jews, but such Jews had effectively broken with the Jewish religion and the Jewish community, and in that sense were un-Jewish. For his part, Dr. William L. Pierce wrote in his article “Racethink”: “it is a fact that there are a few Jews who care little or nothing for money, do not despise all who were not born into their tribe, and are genuinely appalled at the behavior and attitudes of the great… Read more »

Wow!, is right Joe. I was waiting for the punchline while reading this and, when it didn’t come, I almost fell over. Think I’ll have to read the man’s book.

Let us not get too excited and let us not forget our racial origins – we are white men and women and Gerard Menuhin is a Jew. Some of you might recall that David Cole also a Jew, at the tender age of 21 gained some notoriety many years ago by exposing the lies surrounding Auschwitz. He appeared on Phil Donahue, Montel Williams and 60 minutes, and was considered by some to be an important historical revisionist between 1990 and 1995. For those interested the Occidental Observer did a story on Cole back in 2014.

You must always remember that the primary motivation of a parasite is exploitation even when it is packaged as historical revisionism.

White_Warrior thanks for the link. Cole is a twisted man of many contradictions. Also thank you for the reminder that just because someone comes out with true statements doesn’t necessarily make him safe or your friend.

Bobby Fischer was an atheist and believed the Jewish religion like all religions clouded the mind from seeing the reality of things. He spoke on many occasions about how underhanded many of his kinsmen were. He pointed a big middle finger right at the Zionist (religious) leaders of his day. They hated him and tried everything to ruin him, driving him to flee the U.S. and several other countries to avoid prison on trumped up BS charges. He married a Japanese woman and moved to Iceland (they offered protection) to live out the rest of his days in peace. I think what pissed off his tribesmen the most is he was one of their smartest members and it stung them to think one of their best outed them. Today the… Read more »

I cannot over emphasis the importance of seeing Jews for what they are – Jews. Many Jews support the crazy Talmudic religion, but many other Jews are secular and some are atheists. Brother Nathanael also provides a wealth of information on the insidious nature of the Jew, but I never forget the fact that he is a Jew. He is a Jew because of his DNA! It is the DNA which codes the behaviour of the Jew. I am white because of my DNA – never forget the origin of your DNA – in the end DNA is all that matters!

Yes,
I am well versed in genetics and micro-biology.
My point was Fischer was rejecting the most aggressive and warped belief system his brothers adhere to.
He knew it was helping bring out the worst in how they treat others.
He also had seen all religion or dogma as clouding the minds of men and disliked religion in general.
He hated their controlling nature the most; he was a free agent in all his deeds.

It is why they hated him so much, they like control over other, even their own people.

Knowing the nature of the Jew, I am always unhappy to see white people showing admiration for the Jew. This indicates that the white person may be thinking like an individualist – not all blacks are bad, not all Jews are vile scum – Gerard Menuhin, Bobby Fischer, Brother Nathanael, Norman Finklestein and Israel Shahak for example have told the truth about Jews. The important question is why are they telling the truth? Cui Bono – Jews do nothing unless there is something in it for them either personally or financially.

To not help those who are exposing the double standard we live under at present is, how should I say ….foolish.

Helping does not mean leaving ourselves open to being backstabbed.

Were ever I can get ammo (useful data), i will take it and use it.

You think Zionist Jews would turn down help from goyim if offered freely? No, they would take — and watch their backs just in case.

AKA – The tale of the Scorpion and Frog.

See his English wikipedia page and the thread at the forum at codoh.com

Thanks for the information, NHL — correction made.