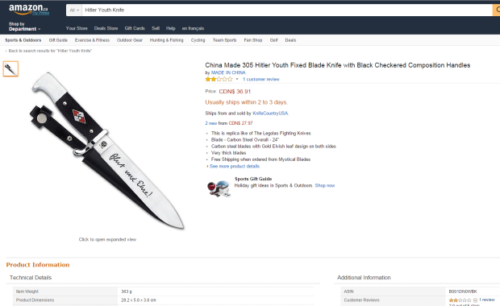 Amazon is a huge public marketplace, in which many private sellers and small business owners can sell their wares — but Jews want any items relating to National Socialism banned. All, that is, except items which condemn it — they are perfectly fine.

THE B’nai Brith, an organized-crime-linked Jewish group, demanded Amazon censor National Socialist items in a letter to Amazon’s founder and CEO Jeff Bezos in 2013, but nothing changed. Now the censorship push has been renewed. (ILLUSTRATION: A Hitler Youth knife with the words “Blood and Honour!” engraved on the blade is one of the many items for sale on Amazon.ca)

“To say the least, it’s very disturbing that this sort of hate material is still available online for sale,” said Michael Mostyn, the CEO of B’nai Brith Canada.

“By contributing to more materials that are easily accessible to youth in our country that promote intolerance, promote hatred, ideologies that regular Canadians view as toxic, it’s not helpful, it’s harmful.”

B’nai Brith Canada does an annual audit tracking the number of anti-Semitic incidents in Canada.

Mostyn said the organization recorded 1,627 anti-Semitic incidents last year, the largest number in the 30-year history of the audit and a 28 per cent increase over the year before. 2015 numbers aren’t yet available.

B’nai Brith attributes much of the increase to the surge of anti-Semitic messages online. Mostyn believes there is a direct correlation between the sale of National Socialist items and anti-Semitic acts.

“Our audit has shown that anti-Semitic words or imagery, particularly in an online social media world we live in today, inevitably leads to anti-Semitic incidents,” he said.

Mostyn notes certain items, like pro-ISIS paraphernalia, are not available on the U.S. or Canadian Amazon sites. He wonders if the company is censoring some sales but not others.

“I think Canadian consumers expect a lot more from groups like Amazon to fulfil their corporate, ethical and moral responsibilities in sales to consumers.”

“Amazon has to immediately develop a proper policy and guidelines to deal with these issues,” Mostyn said. “Consumers in Canada are not interested to see hate propaganda available freely online and victims of racial discrimination and genocide, in some cases, do not want to be re-victimized by having these hate items available online to just anybody that’s searching for it.”

B’nai Brith has started a petition to get Amazon to remove the items.

Canada has no legislation specifically restricting the ownership, display, purchase, import or export of National Socialist flags. Sections of the criminal code do prohibit the use of these kinds of flags to “communicate hatred in a public place.”

In the U.S., the public display of National Socialist flags is protected under the First Amendment of the U.S. Constitution.

However, in some countries, such as France, it is illegal to display National Socialist flags, uniforms and insignia in public, unless for the purpose of a historical film, show or spectacle. Germany has also banned the use of National Socialist symbols. …

I wonder if their deranged neuroticism ever just wakes them up in the night. If the insanity of the misfortune they inflict on everyone around them ever just appears to them in their own reflection. A China made, Hitler Youth knife? Who but jude would own the rights to producing and selling such consumer rubbish? What are the jewish ownership proportions of Amazon? Criminogenically irrational again, they commit their own crimes, investigate themselves; and then blame Europids while demanding funding from the western tax commons on phony ethical claims. Consider, even without a jewish marketed, jewish grievanced, Chinese made Hitler Youth knife, what a grave mistake it is for any white nation to avoid actively excluding judea. In the future, there will be no jew grievance industry organizations in Canada.

Amazing this ersatz cults paranoid tyranny never strikes them as belie their own claims to insignificant victimhood…even odder is the cohencidence of the banning of swastika’s on even toy kits and yet their frequent appearance on synagogues which is, of course, never done by agent provocateurs…