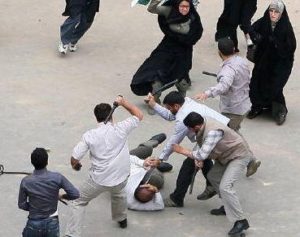 Are the refugee violence statistics sugar-coated? An LKA (State Criminal Office) official told how the police downplay refugee crime — for the “civil peace”. “It is not a lie, nothing is covered up, but there are things deliberately omitted,” he says.

HANNOVER. The truth has many facets. Sometimes it can be terrible. Before his eyes, a refugee has struck another with a brutal headbutt, leaving the skull bloody. Markus Schwarz is an official of the state criminal police. He did not see the violence coming. Just a few days ago he had talked to the refugees in a relaxed way, about Islam, about German customs and about prophets in Christianity and Islam. It had seemed a very friendly atmosphere; the policeman and the university-educated Syrians had been curious to know about the other’s different world. The conflict arose “out of nothing,” says Schwarz. In the police report later, it said there was a dispute in an initial reception center “with a non-serious injury”. (ILLUSTRATION: A fight in a refugee shelter in Suhl, in the eastern state of Thuringia, left 11 people hurt. Police arrested 15 brawlers in the aftermath.)

“There are instructions to use our judgment for interpretation so as to ensure that the civil peace is preserved,” says Schwartz. The officials complained that they were expected to downplay and trivialize events like the bloody brawl. Too much bad news from the refugee camps could tip the mood [of Germans]. The fear is that “right-wing screamers were only waiting for fodder that confirms their ideological prejudices.” Schwartz has for long been silent. Now he considers it his duty to speak.

“It is not lying, covering up anything, but some things are deliberately left out. That’s the problem,” says Schwartz. He is sitting in a pub armchair. Schwartz is not his real name. For his protection his identity is being kept secret. He is half the age of his minister, Thomas de Maiziere. For just under two hours, he gave me his view of the disturbing situation for civil servants.

Schwartz is not a xenophobe. He just came off of a busy weekend as a volunteer in a charity collection point just behind the train station. He sorted used clothes, and accompanied a young father with his two year-old daughter to an ophthalmologist to treat her acute conjunctival irritation. The girl received assistance so that her eyes no longer watered. Schwartz does what he can. He doesn’t complain about too much work. He complains that he has to twist or conceal the truth.

Recently, he sat opposite the interior minister, he says. It was about the preparatory work for the police crime statistics, the issue of delinquency in and around refugee centers. One can not expect the people to want them to come out if it is confirmed by reports that there is an accumulation of sexual violence, of severe injury. “That would be a bad result,” is what Schwarz says he understood from his top employer, the Minister.

He also passed it on to his people. Applying this filter makes the statistics a little different, some numbers would be supplied later, incidents would be glossed over and renamed. The word “honor killing” does not appear in the logs. “We make room for interpretation so that the civil peace is preserved,” he says. Schwartz frequently crashes from enormous remorse. “You can use your discretion so that you do not lie, but you still have the sensation that you are [lying].”

Schwartz knows many unsavory facts from his own experience and from the descriptions of his colleagues from Saxony, Bavaria and from North Rhine-Westphalia. Sex to continue the journey was an almost routine forced currency for war-brutalized smugglers from the Balkans. Pedophiles were experiencing fat times because refugee children could be misused for child pornography crimes; the youngest age of the victim had fallen from their teens to two to six years.

This is what Merkel and her EU buddies are importing into Germany — in the millions! It’s incredible, and no way to stop it without a mass uprising. Merkel’s term as Chancellor continues for 2 more years.

She is guilty of using deceit to keep the German population from rebelling against her traitorous policy. Her ministers go along with it, some even enthusiastically. The leftist parties and the media are encouraging it. Why the great desire to introduce millions of Arab and Middle Eastern Muslims into Europe? Black Africans too! The only reason given is “humanitarianism” that Europe supposedly stands for. Since when?

It’s such a transparent scheme to dilute the voting power of the National people to ensure that ethnic nationalism can never rise again. However, Eastern Europe is not going along and that puts a snag in the works.

It is very unfortunate and dismaying that you are using a photo which is related to Iranians protesters against Iran’s rigged presidential election in 2008 in Tehran being been bitten by government mercenaries and you call it ” A fight in a refugee shelter in Suhl, in the eastern state of Thuringia ” . I didn’t expect this from you!
Your proud Persian fan

The entire article including the photo you are describing is mirrored from another source, as displayed at the end. It is not NV who intentionally put it there.

What I find even more pitiful is that you focused entirely on the photo and made no mention on the information that was provided from the article. Maybe you think that is false as well…

Your brief statement is not surprising though, as you do not appear to be an anguished person from European ancestry.

Next time, please reconsider and keep your stupid a** comments to yourself.

I agree totally with proud Persian fan regarding the use of the photo at the top of the article which I caught right away as the Iranians protest. I feel this could have been an error accidentally done. AS your articles are so informative unlike the fake news networks on television, of which I haven’t watched for years, I sincerely hope for us this mistake not to be repeated. I’m sure with all that is going on surely a better choice of a photo relating specifically to the article would have sufficed much better.

I caught right away as the Iranians protest. I feel this could have been an error accidentally done. AS your articles are so informative unlike the fake news networks on television, of which I haven’t watched for years, I sincerely hope for us this mistake not to be repeated.
Your proud American fan.