Jews at “Forefront of Welcoming” Invasion 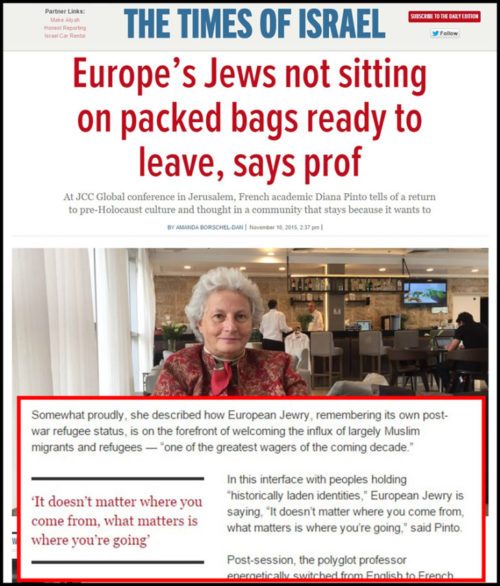 EUROPEAN JEWS are “on the forefront of welcoming the influx of largely Muslim migrants and refugees,” one of Europe’s leading Jewish historians, Dr. Diana Pinto has claimed.

Speaking at a Jewish Community Center’s world conference in Jerusalem last week, Pinto, a Senior Fellow and a board member of the London-based Institute for Jewish Policy Research, described how “European Jewry, remembering its own postwar refugee status, is on the forefront of welcoming the influx of largely Muslim migrants and refugees — one of the greatest wagers of the coming decade.”

According to coverage of her speech printed in the Jerusalem-based Times of Israel, Pinto, who is also a founding member of the European Council on Foreign Relations, said that “in this interface with peoples holding historically laden identities, European Jewry is saying, ‘It doesn’t matter where you come from, what matters is where you’re going.’”

Pinto’s comments were confirmed by an article in the Jewish Telegraphic Agency of September 8, 2015 (“European Jews, mindful of risks, urge aid to refugees”), which told of several instances of Jews pushing for aid for the invading nonwhite hordes even though they were well aware that many of the incoming Arabs were “anti-Semitic.” 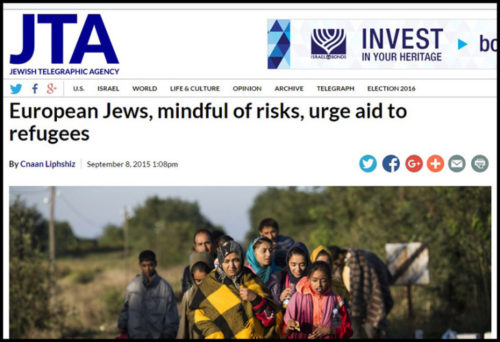 The JTA quoted Ron van der Wieken, chairman of the Central Jewish Organization of the Netherlands, as saying that while he was “aware that some Middle Eastern refugees harbor very negative feelings toward Jews … Jews cannot withdraw support from those in need and fleeing serious violence,” and urged Holland to devise a “charitable” refugee policy.

Zoltan Radnoti, the newly elected chairman of the rabbinical board of the Mazsihisz umbrella group of Hungarian Jewish communities, was then quoted as saying, “I help the refugees with fear that I am helping send danger to other Jews in Europe. I know some of the refugees may have fired on our [Israeli] soldiers. Others would have done so in a heartbeat. I know. But I am duty bound to help.”

Mazsihisz has set up collection depots in Budapest Jewish institutions from which it delivers food, clothes, diapers, medicine, water, and other necessities to the invaders.

In Italy, the JTA reported, the Jewish community of Milan threw open the doors of its Holocaust museum to accommodate homeless invaders from the Middle East and Africa.

In Brussels, the JTA continued, one Menachen Margolin, a Chabad rabbi and director of the European Jewish Association lobby, led a delegation of rabbis to deliver food and nonperishables to the invaders. 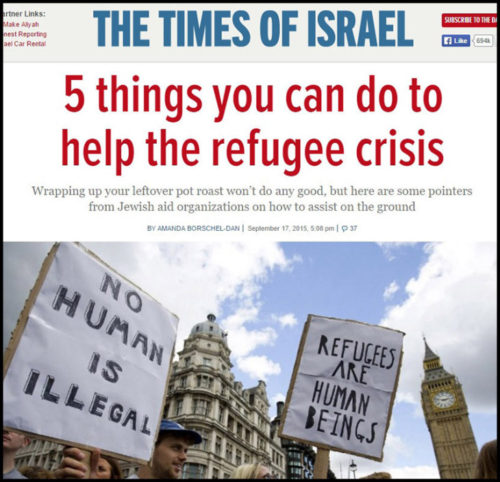 The Times of Israel reported earlier (“5 things you can do to help the refugee crisis,” September 17, 2015), that an emergency meeting of the Board of Deputies of British Jews was held in September to “coordinate over 20 UK Jewish organizations’ responses to the refugee and migrant crisis.”

The Board of Deputies of British Jews has even set up a special website called “Support Refugees,” supported by all major Jewish synagogues and organizations in the UK, to “be a one-stop shop for those who want to get involved in supporting refugees and asylum seekers both in the UK and abroad.”

The Times of Israel went on to detail different ways its readers could help the invaders in Europe. Firstly, the article told its readers not to send food or clothing, but only money — because, as Shachar Zahavi, from the Israeli NGO IsraAid, was quoted as saying, “We prefer to purchase relief items on the ground [in Greece].”

What was really needed, Zahavi said, was “baby carriers to be distributed in Greece to those families that are still on the move and crossing borders.” In addition, IsraAid was organizing Jewish doctors to set up clinics in Greece and Serbia.

The Times of Israel also reported that the US-based Hebrew Immigrant Aid Society (HIAS) had announced that it has hundreds of staff on the ground in twelve countries where it provides refugees with legal assistance, trauma counseling, and training in sustainable livelihoods.

Of course, in typical Jewish Supremacist hypocritical fashion, these Jews and their organizations are all in favor of the nonwhite invaders pouring into Europe — but at the same time, all support Israel, which has flatly refused to accept one “refugee” from anywhere, never mind Syria.

As detailed in the LA Times of September 6, 2015 (“One country that won’t be taking Syrian refugees: Israel”), Israel’s Prime Minister Benjamin Netanyahu said that Israel’s “lack of demographic and geographic depth” required controlling its borders against both “illegal migrants and terrorism.”

This “lack of demographic depth” to which he referred is of course the fact that immigration into Israel is strictly controlled and is racially-based: no one who is not Jewish can immigrate to that state.

This racial exclusivity is what is meant by the oft-heard calls for the maintenance of Israel as “a Jewish and democratic state” — the Jewish propagandists always throw in the “democratic” part of that cry in order to divert attention away from the fact that what they really want is a racial Jewish state, for Jews only.

While it is of course the right of every race and people to have their own state, it seems that the international Jewish lobby only wants to reserve this right for themselves, and deny it to everyone else.

Hence the international Jewish lobby, through direct political action and their controlled mass media outlets, is always “at the forefront” of promoting the nonwhite invasion of European nations —but at the same time fanatically supports Israel’s closed border policy and that state’s racially based immigration policies. 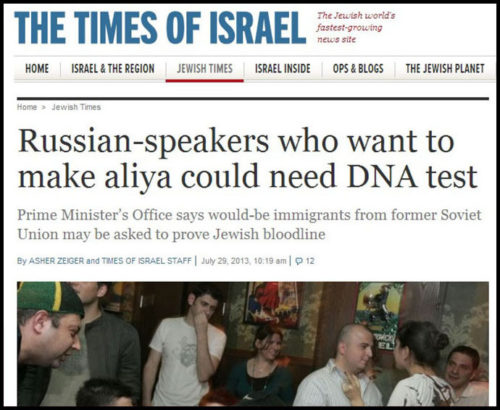 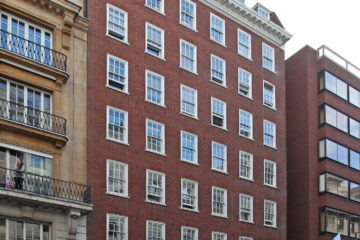 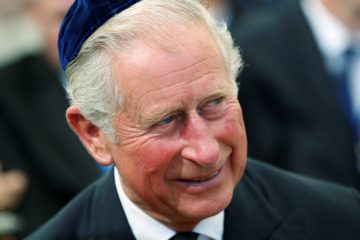 She is an anti-Gentile bigot and Anti-European who promotes multiculturalism in Europe, but cultural preservation for Jews. She wrote a book called different light the book of hanukkah (pro-Jewish)
http://www.amazon.com/Different-Light-The-Book-Hanukkah/dp/1930143370

Jews are at the forefront of wrecking Western Civilization with non-Whites in their undeclared genetic racewar against Whites.

Jew says amnesty for illegal immigrants is at the top of their agenda
https://www.youtube.com/watch?v=i5wBih3XMC4

Refugees aren’t human, and they ARE illegal when they flee to my country instead of being cowards and not fighting for their own!

Jews at “Forefront of Welcoming” Invasion