IF YOU WATCH FOX NEWS or read political blogs you probably have a headache from all the accusations of “fascism” bouncing back and forth from left to right and back again. “Obama’s a fascist!” “Rush is a fascist!” “Bush is a fascist!” “The Zionists are fascists!” “Your grandmother’s a fascist!” “Kevin Strom is a fascist!” And then we have that ridiculous neologism “Islamofascism.” (ILLUSTRATION: John Kennedy delivering his State of the Union address, 1963, fasces displayed behind him.)

Modern Republicans and Democrats both misuse the term “fascist” — and to such a degree that the misuse has started to be enshrined in dictionaries.

In the broad sense, the term (from the Latin for “bundle”) just refers to the strength of a united people — as in the ancient Roman story in which a father asks his sons to gather sticks from the forest and bring them to him. Taking the wooden rods one at a time, he easily breaks each of them in two. But when the very same rods are bound together — symbolizing a united family or people — they are unbreakable.

The fascist symbol, or fasces, usually with the rods bound around an axe to signify authority, thus became the symbol of the Roman Republic and its ideals. It was also used by the French republic, was adopted by Mussolini’s 20th century Fascist movement, and was also used by the United States during the same era — among many others.

The U.S. dime displayed the fasces on its reverse from 1916-1945; and it is displayed prominently to this day in the main chamber of the U.S. Congress.

In the narrow sense, fascism means specifically the socio-political movement popularized by Benito Mussolini and to some degree carried on into more recent times by the Movimento Sociale Italiano.

It was characterized by the ideal of the state as expressing the will of the people, with the people being an organic, natural entity, not divided into classes with differing economic interests but instead with each sector of society (such as farmers, laborers, administrators, merchants, et cetera) able to elect its own legislative representatives. In practice, many compromises were made with allies and with the old order of things.

The central government and ruling party had a lot of authority under Italian Fascism, and that is really the only similarity real fascism shares with the pop-definition of the word. But other central governments and parties past and present had similar or greater degrees of authority — such in fact being the norm for almost all human societies throughout history.

The pop-definition of “fascist” is roughly “big, bad, scary, and mean authoritarianism.”

It’s misused that way because both sides think they can make brownie points by scaring voters with the spectre of authoritarianism from the rival gang.

Homeschooling Texts for Teaching History
Sardinia's Flag: Four Beheaded Non-Whites
The Progress of Higher Learning
The Professor and the Carnival Barker
The Might of the West
Forza Nuova Demands Freedom For Luca Traini
Italy: Anti-White Feminists React to Fertility Day With Hate and Rage
Toeing the Line
Tags:Barack ObamaConservatismFascismHistoryItalyLiberalismNeoconservatismRepublicansRush Limbaugh 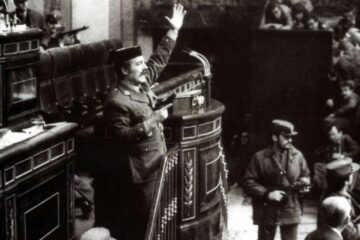 Italian: fascia – band, belt, tie: The tying together of an ethnic community for the purpose of self-preservation.