Canadian Universities Freak Out Over Poster For ‘White Students Union’ 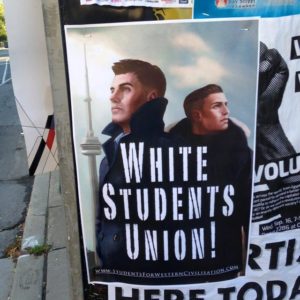 Flyers appeared on bulletin boards and elsewhere at the University of Toronto, Ryerson University, and York University, all of which are large public colleges in Toronto. The flyer, showing two young white men standing in front of Toronto’s CN Tower, declares simply “White Students Union!” and invites people to visit a website titled “Students For Western Civilization.”

The website is sparse, but does feature an op-ed allegedly rejected by York University’s student newspaper which declares “York Needs A White Student Union!”

“Students are taught that all of Western Civilization is inherently ‘racist’ and that Western countries are plagued by a ‘systemic and institutionalized’ racism which reinforces a ‘system of white supremacy,’” the editorial argues. “A white students’ union … would serve to promote and celebrate the culture of Western Civilization. It would serve as a platform to promote and advance the political interests of Western peoples. And most importantly, it would serve as a venue to explore those perspectives on ethnic politics that our Marxist indoctrinators seek to suppress and ignore, thereby giving to York a taste of that intellectual “diversity” which it purports to value.”

Officials at all three schools have moved rapidly to denounce the fliers as racist, and students quickly took them down. One student told Metro News that the flyer’s mere presence was “triggering,” implying that it caused fits related to Post-Traumatic Stress Disorder. (RELATED: The Dictionary Of The Modern Campus Activist)

“A poster like that is obviously a cause for concern and if there are concerns that the subject matter is offensive, they will be taken down,” University of Toronto spokeswoman Althea Blackburn-Evans told The Globe and Mail. At Ryerson University, school officials labeled the signs “offensive” and encouraged students to report any they see so they can be swiftly removed.

But at least one person says the extremely negative response to the flyers proves the existence of anti-white bias on campuses. Ricardo Duchesne, a professor at the University of New Brunswick who appears in a video on the Students for Western Civilization website, said nobody would bat an eye at flyers for groups dedicated to any other race.

“Nobody would have thought anything about it, they would have said, ‘that’s great, that’s what diversity is about,” Duchesne told Maclean’s, a major Canadian news magazine. “But you can’t say white student union. I would have preferred European student union. But I don’t oppose this because I believe in freedom of speech and I believe that a university is a place where ideas that are controversial have to be debated in an open atmosphere.”

Duchesne’s point about groups dedicated to other races and nationalities has some weight. Ryerson University, for example, has all of the following as official student groups:

United Black Students Ryerson (which has a quite aggressive logo)

Intelligence, Skill, and the Biological Basis of Morality

Canadian Universities Freak Out Over Poster For ‘White Students Union’