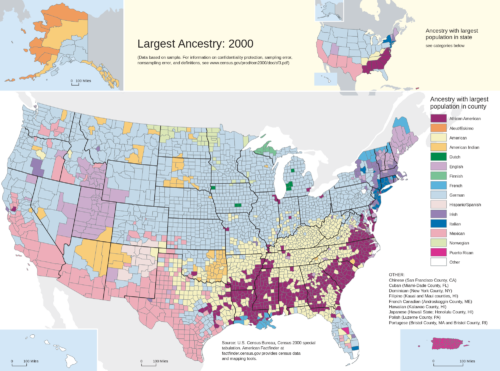 MAKING SENSE of the American scene can be a lot easier if we focus on the genetic ancestries of the people who live there.

THE BASICS OF GENETICS

Children inherit their genetic traits from their parents. (Why doesn’t Nelson Mandela have blond hair and blue eyes? Because his parents didn’t.)

A child has a genetic makeup half from one parent and half from the other.

The science of genetics has made significant advances in recent years. We are now able to tell, for any given individual, what portion of his / her genetic makeup is from which continent of ancestry.

For any tested group that’s genetically mixed, we can establish an aggregate “gene pool” for that group, which is simply the mean average of the ancestral-gene-pool percentages of all the individuals in that group.

A NOTE ON FACTS AND FIGURES

I provide some statistics in this essay. They’ve all been researched and validated by scholars of good will with impeccable credentials, and they’re accessible on the Internet. Feel free to investigate them as you see fit. I won’t burden you here with a lengthy list of citations.

Some of these numbers are easy to find, but others (which are “politically incorrect”) are buried and may take some digging. But they’re available to an interested person who brings to the task a reasonable amount of intelligence, and energy, and integrity.

These are people who voluntarily left their homelands and traveled across the wide oceans to the USA in search of a better life (as they individually defined it). It seems most of them found what they were looking for, since not many of them returned to where they came from. Their ancestral origins are about 90% European, about 10% Middle-Eastern and Asian. These people have worked hard, blended into the dominant American culture after a generation or two, and have generally been pretty successful.

For shorthand purposes, I’ll refer to them in this essay as “White” and not, for the moment, make distinctions between light-skinned Middle Easterners, West Asians, and Europeans.

Today the Whites constitute about 2/3 of the population of the USA.

These are people whose ancestors had been living in the Western Hemisphere for centuries before Columbus arrived. I’ll refer to them in this essay as “Brown”.

The Browns are the dominant racial group in Mexico, El Salvador, Guatemala and Honduras. It’s well-known that the gene pool of those nations is 85-90% Brown. It’s also known, however, that the minority who control the business and politics of those nations are of primarily European genetic ancestry.

Due to the strong Spanish colonial influence, the Mexicans and other Central Americans today (a) speak Spanish as their first language, (b) are nominally Roman Catholic, and (c) have adopted Spanish names for themselves. These people also have olive-colored skin, dark eyes and dark hair, which bears a superficial resemblance to the Mediterranean people of Spain. All these factors can lead to the erroneous perception that the “Brown” peoples of these lands are of predominantly Spanish genetic ancestry, i.e. that they’re genetically European. That perception is totally false.

“Latinos” or “Hispanics” today constitute about 20% of the USA’s population. These people are overwhelmingly genetically Brown. (And the gene pool of those who cross America’s southern border illegally these days is virtually 100% Brown).

Almost everyone in the USA with a Spanish surname has a hefty amount of Brown genes in his makeup.

The continental ancestry of the total American gene pool is therefore about 20% Indigenous, or “Brown”.

These are people who originated in sub-Saharan Africa. They were captured and sold to European slave-traders, who brought them to America against their will, as slaves. They were freed in 1865. I’ll refer to them in this essay as “Black”.

Under current (universally-accepted) American racial terminology, anybody with any visually-identifiable African ancestry is considered (by all concerned) to be part of the “Black” or “African-American” community. This community today constitutes about 12% of the population of the USA.

It is also well-known (not denied by anybody) that the mean average genetic ancestry of today’s “Black” Americans is about 25% White. This means that the continental ancestry of the total American gene pool is about 9% African.

THE ROLE OF INTELLIGENCE

Intelligence is what differentiates us from the animals.

Intelligence isn’t the only factor that contributes to success or failure in one’s endeavors, but without a doubt it’s the most important single factor.

Scholars around the world have developed highly reliable tests to measure the intelligence of individual human beings. Such tests are used routinely in schools, military organizations, and many other contexts.

Some people are blessed with greater intelligence than others.

Like other genetic traits, intelligence has a decided tendency to be transmitted from parent to child.

We have the ability to measure comparative group-levels of intelligence for Whites, and Browns, and Blacks.
Although people have done a great deal of intermarrying and interbreeding in the Western Hemisphere over the centuries, there do remain enormous population reservoirs of pure-blooded Whites (in Europe, the Middle-East and Asia), pure-blooded Browns (in much of the Western Hemisphere) and pure-blooded Blacks (in Africa). These pure-blooded people have been tested for intelligence, and their group measurements are known.

To compare groups, we simply look at the mean average for each group.

The Fundamentals of Civilization

On their own, and before any contact with Whites, neither the Browns nor the Blacks had developed a written language, or metal tools, or the wheel, or any ability to navigate the open seas.

A revealing exercise is to identify those truly rare and outstanding full-blooded Whites whose performances put them in the far upper reaches of the normal curve in achievement. Look at Isaac Newton, Aristotle, Thomas Edison, Christopher Columbus, Louis Pasteur, Alexander Graham Bell, Samuel Morse, Henry Ford, Galileo, and Ferdinand Magellan. And in recent times the Wright Brothers, Albert Einstein, Stephen Hawking, Walt Disney and James Dyson. How many full-blooded Browns or full-blooded Blacks have come close to these levels of accomplishment?

The U.S.A. today is probably the most economically, politically and socially free society that has ever existed.

Americans are free to compete for their own vision of the good life, as they individually define that good life, and they go at this competition with gusto.

But in such a free and fair competition, not everybody succeeds equally.

Members of genetically-handicapped ethnic groups who find themselves disproportionately unable to succeed in the rough-and-tumble of American competition are much more prone to ignore (even flout) America’s society’s norms and engage in destructive and self-destructive behavior, which inevitably includes (a) turning to crime to gain material wealth, (b) taking out their many frustrations in violence of all sorts, and (c) turning to drugs (both legal and illegal) for escape.

Such is the clear sketch of the unfortunate condition of the American Brown and Black communities today.

Illiberal Novelist
Beauty, Art, and Race
"Spiritual Race"
The Tuvel Affair
Is There Intelligent Life on Earth? (part 14)
Gun Control: Not What It Seems
Race Above All
Tolkien: Master of Middle Earth
Tags:DemographicsGeneticsIntelligenceLillian BrepnerRace

Boston: Teen Banned from Cheerleading After Mentioning Illegal Status of 90% of Her Neighborhood 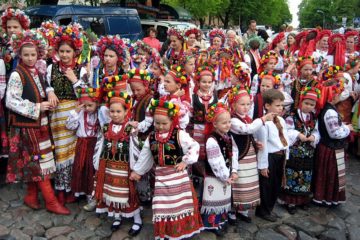 According to that map, if you wanted to divide the land of America to separate Whites from Blacks and Browns you would generally do so by separating the country along the 35th parallel North, and then transport the Whites below that line north of the 35th and blacks and browns above the 35th parallel south of it. In addition to the statements made in the article above about the behaviors genetically handicapped ethnic groups turn to because of their inability to succeed in the American way of life, There are insane Jewish and White liberals who pretend that certain ethnic groups are handicapped not because of genetics but because of environment, and therefore make laws to transport the blacks and browns into White areas so that they have an “equal”… Read more »