As you read, consider the implications for Cosmotheist-based and Cosmotheist-owned organizations, businesses, and communities.

LAST WEEK, America had a rigorous debate over religious freedom. Just in case you crawled into a cave for lent and are now emerging from isolation, I’ll catch you up.

First, Indiana passed a law called the Religious Freedom Restoration Act (RFRA). It mirrored a federal law that has been in place since 1993 which states that government must meet a very high standard before doing things that burden the free exercise of religion.

Fearing that it would create room for business owners not to be part of same-sex weddings, the tolerance mob threw themselves to the ground in unison and began convulsing…for days. Apple threatened to stop doing business in Indiana because of their “discriminatory” laws despite recently opening stores in Saudi Arabia, where homosexuality is punishable by flogging, imprisonment or execution.

Washington’s Governor Jay Inslee ordered a ban on state travel to Indiana despite recently taking a trip to China. Late last week he also had the communist Chinese flag flown on the state capitol grounds.

Connecticut’s Governor Dan Malloy also issued a travel ban to Indiana despite the fact that his state has a RFRA that is broader than the one passed in Indiana.

A reporter from an ABC affiliate in South Bend, Indiana traveled 30 miles to the town of Walkerton to search for business owners who didn’t support same-sex marriage. Inside Memories Pizza, they discovered a 21 year-old girl who, when asked, said she supported the new law. She explained that while the business would never decline to serve a person who identified as gay, she thought they would decline to cater a gay wedding because of their beliefs about marriage.

You pretty much lose your gay card if you have your wedding catered with pizza.

Still, once word got round that there’s a bigot in them there woods, the mob grabbed their torches and pitch forks and temporarily left their ivory towers to protest this monument to intolerance because indignation is what they do. The business was forced to close (hopefully, temporarily).

While the little businesses were being shut down, the big businesses started calling the politicians who promised to do whatever was necessary to keep the campaign contributions coming. In the end, the politicians passed a “fix” which was really a “break”. It clarified that if there is ever a conflict between religious liberty and sexual liberty that sexual liberty would win.

No longer are courts allowed to balance the competing interests of people who identify as gay with the people who have strong beliefs about marriage they are unwilling to compromise. In Indiana now, gay beats God. Every time.

As the debate raged, one thing became clear. Everyone says they believe in religious freedom, but there are very different understandings of what that means.

As one post on my social media feed stated, “Religious freedom is about the right to worship how you want on your own time.” Lots of people “liked” it.

But is it true? Is religious freedom about church and the right to say your prayers?

The American idea of religious freedom is rooted in the First Amendment. “Congress shall make no law respecting the establishment of religion, or prohibiting the free exercise thereof…”

Those eager to take a narrow view of religious freedom often cite Reynolds v. the United States when the Supreme Court said, “Laws are made for the government of actions, and while they cannot interfere with mere religious beliefs and opinions, they may with practices.”

This seems to suggest that the government can control our actions, even those we say are “religious.”

But that quote, and that case, is far from the end of the story.

In fact, it was the beginning story. Literally.

Reynolds, a case from 1878, was the first time the Supreme Court considered what the “free exercise” of religion meant. In that case, they took a narrow view of religious freedom because they wanted to ban polygamy and Mormons were arguing that the First Amendment protected their right to multiple wives.

Strangely, this 140 year-old case in which the conservatives of the day banned polygamy is now being used by modern day leftists to force today’s conservatives to celebrate same-sex weddings.

However, after Reynolds, the Supreme Court abandoned their own precedent and greatly expanded their understanding of what religious freedom was.

Jehovah’s Witnesses were acknowledged to have the right to pass out literature (Schneider v. Town of Irvington, 1939) and refuse to recite the pledge of allegiance (West Virginia State Board of Education v. Barnette, 1943). Seventh-Day Adventists could not lose unemployment benefits for declining to work on Saturday (Sherbert v. Verner, 1963) and the Amish could not be bound by compulsory school laws that conflicted with their beliefs (Wisconsin v. Yoder, 1972).

In these cases, the Supreme Court clarified that if government is going to burden religious freedom, they must: (1) have a compelling reason and (2) use the least restrictive means possible.

It wasn’t until Native Americans became involved that the Supreme Court moved away from strong protections for religious freedom. In 1988, the court ruled that it did not violate the law to build a road through Native Americans’ sacred lands (Lyng v. Northwest Indian Cemetery Protective Ass’n) and then in 1990 ruled that the government could stop them from using peyote in their religious ceremonies (Employment Division v. Smith) as they had done for thousands of years.

Curiously, building a road through sacred lands was not illegal because it did not “coerce individuals into acting contrary to their religious beliefs,” though that is exactly what is being attempted now.

In these cases, the court didn’t just change the outcome, they changed the test.

Instead of requiring the government to have a compelling reason and use the least restrictive means possible, the Court said the government needed only to prove that their laws were “neutral laws of general applicability.”

In other words, “everyone was required to eat the pork, so you Jews have no right to complain about being targeted.”

This is a much lower standard that disrespected the religious freedoms of everyone, not just the Native Americans who were impacted in these cases.

In recognition of this fact, Congress responded to the Supreme Court’s decision by passing the Religious Freedom Restoration Act (RFRA) which restored the standard that existed prior to 1990. It passed Congress almost unanimously and President Clinton signed it in 1993.

Once again, religious freedom received the highest protections we give to fundamental rights.

Since then, RFRA has been used to defend: (1) the rights of a Lipan Apache leader to own eagle feathers; (2) a Sikh devotee’s right to carry a kirpan (an emblem resembling a small knife with a blunt, curved blade) to his job at the IRS; and (3) allowed a kindergartner to enroll in kindergarten despite a policy that a boys hair should be shorter than the collar.

What’s the point of all this?

Religious freedom has always been about much more than “the right to worship how you want on your own time.”

“But not in your business”, they say.

While the law does treat businesses and individuals differently in many ways, it has long recognized that businesses do not exist independent of the people who own them. And those people still have rights.

This is why courts have acknowledged that corporations have free speech rights, the right to be free from unreasonable search and seizure, and even a racial status. After all, you can’t have a minority owned business if the business doesn’t take on some of the characteristics (and resulting protections) of its owner.

If a business can be Hispanic, can it not also be Catholic, Jewish, or Muslim?

Unfortunately, for those who are working hardest to destroy the individual freedoms of Americans, none of this matters.

Things like legal precedent and the free exchange of ideas are simply roadblocks to a more tolerant world.

If they can just stop you from “discriminating”, then the world will become more tolerant. The fact that they have to be exceedingly intolerant in order to make the world more tolerant is lost on them because they have good intentions.

But it should not be lost on you.

Jews Use State Department to "Define Anti-Semitism" for EU

Hate and Defamation: The Full Story of the ADL, part 1 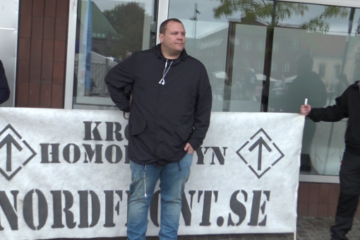